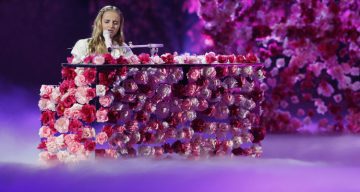 Since her audition, America’s Got Talent contestant Evie Clair has won not only the judges’ hearts, but also the viewers. This 13-year-old girl from Florence, Arizona, enchanted everybody with her soulful and soothing voice. So, it comes as no surprise that she made it to the AGT finals.

Her last performance was especially emotional for Clair, as her father passed away from his battle with cancer just weeks ago. Despite her painful loss, Clair pushed through to deliver a powerful performance, singing “What a Wonderful World” by Louis Armstrong.

Everybody was touched by her rendition, especially the judges who immediately rose to their feet to give a standing ovation as the final notes played. People in the audience were teary-eyed and loved Clair’s moving performance.

Simon Cowell said, “Evie, I’m not gonna judge you. I am going to send you, or tell you how much I respect you, how much strength you have. This was a perfect tribute to your dad. Just the fact it was total silence means that everyone was listening to you. Your voice was beautiful, the song was beautiful, and I am very proud of you, Evie, for what you’ve just done and you’ve given yourself a shot for tonight, congratulations.”

Howie Mandell added, “Before I tell you what I think of that, I just wanna say that our hearts and our souls go out to you, Evie. I know that your father passed this week, and I cannot believe the strength that I’m seeing in such a beautiful young girl, and this is a very dark time in your life, and we all go through dark times. What gets us through is hoping and praying for that light at the end of the tunnel and your voice, and your song, and your presence here is that light at the end of the tunnel, so thank you so much.”

After Clair’s performance on America’s Got Talent a lot of people are wondering about the song and want to know the “What a Wonderful World” lyrics. Here’s a snippet of them below!

“What a Wonderful World” Lyrics

The “What a Wonderful World” lyrics are moving and have been featured in many different movies and tributes. The song has been used in various films such as Range 15, Finding Dory, Back to the Sea, Journey 2: The Mysterious Island, Head over Heels, Madagascar, Swing Girls, Freaky Friday, Madeline, Wrestling with Alligators, 12 Monkeys, The Kennedy Years, Good Morning, Vietnam and many more. “What a Wonderful World” has also appeared in the trailers for Chicken Little and The Hitchhiker’s Guide to the Galaxy.

Many TV shows have also featured the song, like MythBusters, The Simpsons, The OA, Strictly Come Dancing, The Mentalist, An Idiot Abroad, Life on Mars, Hinter Gittern, Dawson’s Creek, The King of Queens, Vamp, Florida Lady, Twin Peaks, The Green Man, Moonlighting, and The Muppet Show.

The song is truly mesmerizing. And, the judges are not the only ones who believe that it was the perfect choice for Evie Clair to sing as a tribute to her late father.

The winner of America’s Got Talent season 12 will be announced tonight. Do you think Evie Clair has a chance of winning the $1.0 million prize? Let us know your opinion in the comments section.