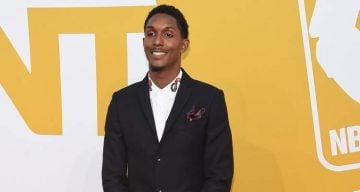 When you hear about Lou Williams, his basketball achievements come to mind. But we also can’t forget Lou Williams’ girlfriends. (That’s right, plural!) The NBA star famously dated two women at the same time. But while Ashley Henderson broke up with him, Rece Mitchell and Lou Williams remain together.

LA Clippers shooting guard Lou Williams dated two women at the same time, and one of them broke up with him. But he’s still happy with his current girlfriend.

Williams scores season highs in games, hangs around with rappers, and makes music while juggling two girlfriends. However, he parted ways a couple of years ago with one of his girlfriends, Ashley Henderson.

These days, the basketball player is still going strong with his remaining girlfriend, Rece Mitchell. And we’ve got everything you need to know about her, right here!

She Has a Twin

Rece Mitchell is a native of Detroit, Michigan, and graduated from Michigan State University. Very little is known about her family and early life.

Mitchell grew up with her twin sister, Daria Marie Mitchell. They have a hair weave retail business together called 2Glamorous.

The sisters pride themselves in catering to every type of customer, regardless of their ethnicity, age, and gender. They are on top of the latest hair trends and run a beauty blog about celebrity hairstyles on their website.

Rece and Daria Marie Mitchell also appeared on ShowMag.com together.

Just me and my other half! ?‍♀️

She Was Okay with Sharing Her Boyfriend

Lou Williams was simultaneously dating Ashley Henderson and Rece Mitchell at the same time. The NBA Sixth Man of the Year awardee has two daughters, Jada and Zoey Williams, with Henderson.

Mitchell was apparently cool being sister wives with Henderson. She has been photographed with Williams and Henderson’s daughters and appears to be close to them, too.

Williams spoke about his dating setup and stated that it was not uncommon for NBA players to have two girlfriends.

“I was just the first person to have it mentioned on a song,” Williams said, referencing Drake namedropping him and his triangular relationship in a song.

Since Williams and Henderson broke up in 2015, it’s not known whether Mitchell remains close with Williams’ baby mama.

Happy Birthday to you @louwillville . To the moon and back ? ! Go figure he's taking me out on his bday ! ?

She Has Fabulous Nails

Besides owning a hair weave business with her sister, Mitchell has her own salon. The beauty entrepreneur is the owner of Grandeur ATL in Atlanta.

Grandeur ATL is a full-service nail, eyelash, eyebrow, and makeup bar. So, it’s no surprise that her nails are on point every time Rece Mitchell is spotted courtside at her boyfriend’s games.

Grandeur’s Anniversary ! My baby turned 1 today. I thank everyone for all the love and support … I am truly blessed!!!