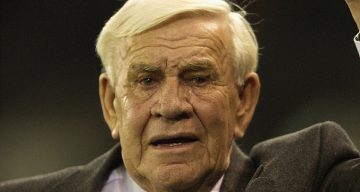 Lou Richards was more than just a great Australian football player. He was one of the biggest sporting icons, who thrilled fans as both a player and as a commentator. His death at the age of 94 has robbed Australia and the world of a legend.

AFL legend, Lou Richards died today (May 8) at the age of 94. Richards was an Australian footballer, who played 250 games for the Collingwood Football Club in the Victorian Football League between 1941 and 1955. The Collingwood premiership captain and Footy Show personality was considered to be one of the greatest figures in the game. Richards passed away in his nursing home in the Melbourne suburb of Windsor. We have details on Lou Richards’ cause of death and more from Lou Richards’ wiki.

Running in the Family

Lou Richards was born on March 15, 1923 in Collingwood, Victoria, Australia. He followed in his family’s footsteps by playing for the Collingwood club, where his grandfather, two uncles, and brother had also played. This made Collinwood the only club to be captained by three generations of the same family. Lou Richards’ family has played over 1,200 games between them. Richards’ position was a rover, and he was captain of the club for four years, including the 1953 premiership team.

A Much Loved Commentator

After his retirement, Lou Richards became the manager for some Melbourne hotels, including the well-known Phoenix Hotel on Flinders Street. However, he truly found fame in as a media personality. He started as a sports journalist for The Argus and later The Sun-News Pictorial, where he earned the nickname “Louie the Lip.” He became a very popular commentator on both radio and television, appearing in the popular World of Sports program. Lou Richards’ Footy Shows in the 1990s and 2000s were also noteworthy for the commentator.

Recipient of Many Awards

As an athlete, Richards was nicknamed the “Kiss of Death” after the column in The Sun, and he backed up his tips with famous statements like “I’ll cut Teddy Whiten’s lawns with nail scissors” and “I’ll jump off St. Kilda pier.” Richards wrote a memoir titled The Kiss of Death: Memoirs of a Sporting Legend in 1989. He was honored with many awards including the Member of the Order of the British Empire, an Australian Sports Medal, and a Centenary Medal. Richards was inducted into the Australian Football Hall of Fame and the Sports Australia Hall of Fame in 1996 and 2008, respectively.

Richards married Edna Bowie in 1948, and the couple had two kids, both daughters. Lou Richards’ wife was admitted into care, suffering from dementia in 2005. She died at the age of 87 in March 2008. After that, Richards cut down drastically on his public appearances. Lou Richards died on Monday, May 8, 2017 in his nursing home at the age of 94.