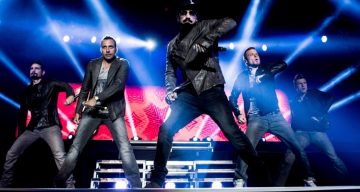 Nineties pop lovers got a wave of nostalgia as news of the renowned boy-band manager’s death surfaced last week. Lou Pearlman, the man behind our favourite 90s gents, Backstreet Boys and ‘N Sync, died in prison on Friday (August 19). Many are asking “How did Lou Pearlman die?” and “What was Lou Pearlman’s cause of death?” Some information is yet to be discovered, but we are shedding light on what is known, including Lou Pearlman’s net worth, history with the bands, and troubles with the law.

Who is Lou Pearlman?

Lou Pearlman was the highly successful manager and record producer of some of the most popular boy bands from the 1990s, including ‘N Sync, The Backstreet Boys, O-Town, Aaron Carter, and LFO. Born June 19, 1954, Pearlman was born in Flushing, New York, U.S. and was later nicknamed “Big Poppa” and “Incognito Johnson.”

He was the only child of his two parents, Hy Pearlman, a dry cleaning business owner, and Reenie Pearlman, a school lunchroom helper. He had his autobiography published, titled Bands, Brands, & Billions., and was inspired by his cousin Art Garfunkel’s wealth and fame.

The rest of his history is quite negative as his disobedience to the law was his major downfall. And if you can believe it, even with all of his success in signing some of the world’s biggest artists, Lou Pearlman’s net worth is $300 million… in debt. He was involved in one of the largest (and longest-running) Ponzi schemes in U.S. history, for which he was imprisoned.

Why was Lou Pearlman in prison? On May 21, 2008 a judge gave him a sentence of 25 years in federal prison for cheating investors out of more than $300 million over the course of twenty years. According to the Orlando Sentinel, Senior U.S. District Judge G. Kendall Sharp offered an unusual deal to the boy-band manager. The judge gave him the opportunity to knock off time from his sentence by removing one month per term for every $1 million he paid back to investors.

Pearlman pleaded guilty to one count of making a false claim in a bankruptcy, one count of money laundering, and two counts of conspiracy. According to an in-depth report by The Hollywood Reporter in January of 2014, Pearlman’s offenses affected about 1,700 victims. Ouch!

It’s clear Pearlman was stressed about his sentence. In an attempt to launch his latest band, US5, which could have provided “significant profits” to help him pay off his debt, he requested permission for supervised phone and Internet access while in prison to promote the band. According to Reuters, federal prosecutors rejected him, explaining his track record proved he was untrustworthy. Pearlman blamed his failure to pay back the investors on that decision.

Financial offenses were not all Pearlman was accused of. There were also allegations about strange things that went on in Lou Pearlman’s house. It was alleged that Pearlman was a sexual predator, harassing the boys he surrounded himself with. Thanks to his prison sentence, Pearlman was left without further opportunity.

A prisoner database managed by the Federal Bureau of Prisons confirmed Lou Pearlman’s death. The location in which he was being held remains unclear, but it has been suspected he was at the Federal Correctional Institution in Texas, U.S. The cause of his death is still unknown. There have been speculations as to how he died, but nothing has been confirmed or revealed as of yet.