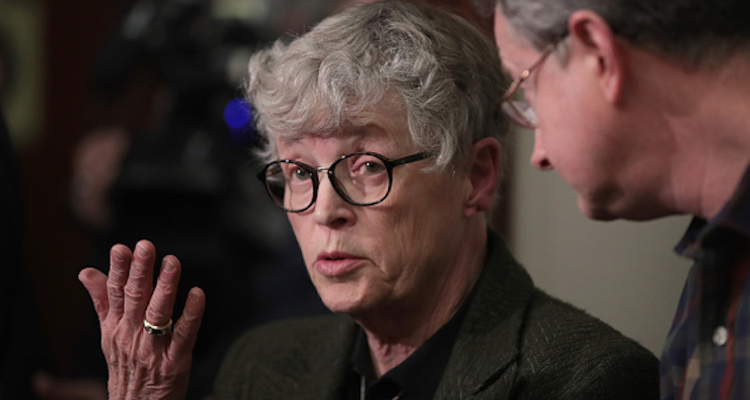 Michigan State University president Lou Anna Simon resigned from her position amidst the Larry Nassar scandal. She has been married to Roy Simon for a very long time now. If you want to know more about Lou Anna Simon’s husband, then take a look at our Roy Simon wiki.

Lou Anna Simon announced her decision to step down as Michigan State University president after an outcry for her resignation, following the allegations against Dr. Larry Nassar.

“As tragedies are politicized, blame is inevitable. As president, it is only natural that I am the focus of this anger. I understand, and that is why I have limited my personal statements. Throughout my career, I have worked very hard to put Team MSU first. Throughout my career, I have consistently and persistently spoken and worked on behalf of Team MSU. I have tried to make it not about me. I urge those who have supported my work to understand that I cannot make it about me now. Therefore, I am tendering my resignation as president according to the terms of my employment agreement.”

MSU President #LouAnnaSimon made the right choice to resign following the #LarryNassar scandal. I think all she needs to do is surrender to the feds and turn herself in time to go to prison she is an accessory to the sexual abuse of 140 gymnasts. #lockherup #TimesUp #Metoo #LouAnnaSimon

Four years later, he received his J.D. from New York University School of Law, where he was the editor-in-chief of the N.Y.U. Law Review.

His Career as a Professor

The one in the middle in this picture is MSU President #LouAnnaSimon she allowed this man #LarryNassar to molest little girls and sexual assault women well I got news for you your pal your buddy Larry Nassar is getting sentenced today after that the police will be coming for you your an accessory to the crime. But today justice will be served #MSUpresident #Resign #lockherup

According to his LinkedIn profile, Roy Simon started working as a law professor at Washington University School of Law in 1983. He worked there for almost nine years.

In 1992, he taught law at Hofstra University School of Law for nearly 11 years. He taught lawyers’ ethics, and directed Hofstra’s Institute for the Study of Legal Ethics.

In 2003, he was named the Howard Lichtenstein Distinguished Professor of Legal Ethics at Hofstra. About his work, Simon wrote, “I resigned from Hofstra to in September 2011 to devote more time to writing books and articles on professional conduct, working on bar committees in the legal ethics field, and consulting with lawyers and law firms regarding matters of professional conduct.”

For the past six years, he has been a distinguished professor of legal ethics emeritus with his firm, Roy D. Simon, Legal Ethics Advisor to Law Firms.

His work profile reads, “My practice is limited to advising lawyers and law firms on matters of professional conduct and to serving as an expert witness in cases alleging legal malpractice, breach of fiduciary duty, or other issues regarding the professional conduct of lawyers.”

Lou Anna Simon and Roy Simon have been married for years. The couple reportedly met in graduate school. Details about when they got married are unknown at this time.