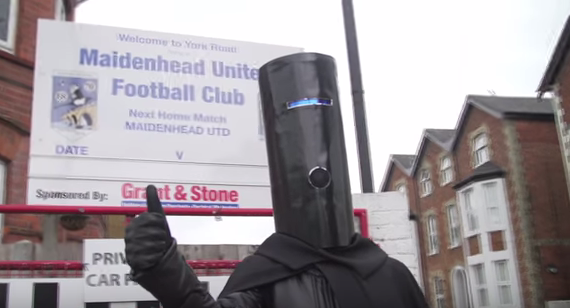 There’s a new lord in town and he looks a little familiar. Who is Lord Buckethead? On an episode of HBO’s Last Week Tonight, Lord Bucket and John Oliver (the show’s host), were the dynamic duo of the night and many were surprised to see the international space lord away from British soil. If you are curious to know more about Lord Buckethead’s involvement in politics and the status of Brexit, then our Lord Buckethead wiki is just what you need.

Who is Lord Buckethead?

Is it just us, or is everyone and their dog a Lord nowadays? From Scott Disick to Lorde the singer —even Billie Lourd! Okay, the last two are actual names, but people are still wondering whether or not Disick is legitimately a Lord, especially after his pit stop knighting in England.

But as for Lord Buckethead, he is a satirical political candidate who has ran in three U.K. general elections. Before he ran in elections, he was a character from the 1984 science-fiction comedy, Hyperspace, also known as Gremloids, which was a parody of the mega-hit Star Wars franchise. In the film, Lord Buckethead accidentally lands on Earth in search of a Princess and the secret files she has —sound familiar? The character was created by the film’s writer and director, Todd Durham. There’s also no record of Lord Buckethead’s family.

Of course an intergalactic traveler with a long helmet has a Twitter account, and he’s not the first celebrity to go through life without a cell phone. After Oliver invited Lord Buckethead into the show’s studio in New York City, he took to Twitter and uploaded his manifesto, and took some time to discuss the recent status of Brexit as he stood on stage with U.K. Prime Minister, Theresa May. When Lord Buckethead arrived in both New York and in the U.K., he created a bit of a Twitter storm. Everyone was happy to see him and he always had a way of giving the people what they want. Politics isn’t just a mess in the United States but in the United Kingdom as well, although neither seem very united lately.

Some have even suggested that he’s actually former Prime Minister David Cameron, but both the Lord and former politician have not commented on that.

While he may only be a comical character meant to make fun of the polarizing political climate, there are some that have gone on with the joke and stated that they would rather vote for a man with a large bucket on their head than the current prime minister! Many have said that May’s job is holding on by a thread and that Lord Buckethead’s ideas such as nationalizing Adele, hunting fox hunters, and holding a referendum on whether or not there should be a referendum, seems to appeal to people. He’s not a political newcomer, either and he stood beside Margaret Thatcher in 1987 and then again in 1992 with John Major. He also won 249 votes in the seat of Maidenhead, against May. So Lord Buckethead as Prime Minister really doesn’t seem so far fetched! Remember, people once laughed at the idea of Donald Trump being President of the United States…then again, some still do!