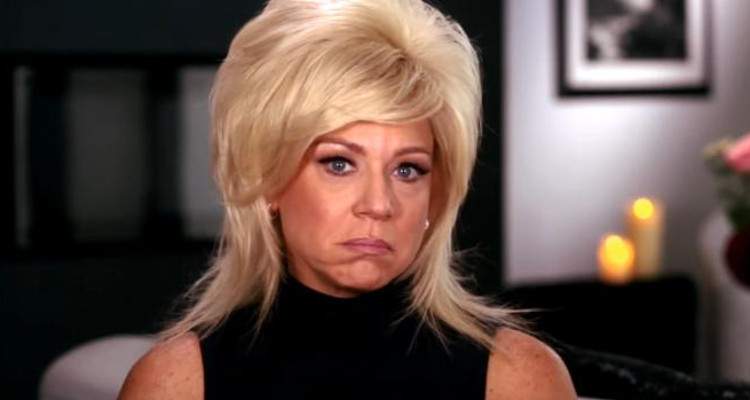 Psychics have always been questioned for their purported abilities, more so if you’re a TV psychic with a show whose popularity never wanes. Theresa Caputo is the titular Long Island Medium of the TLC juggernaut. While there are those who take her word for it, many wonder if Caputo is a real psychic. Can she really talk to the deceased? Are there any secrets hidden under that huge blonde bob? Is Long Island Medium real or fake? Here’s what you need to know.

“I have a very special gift. I talk to the dead,” says Theresa Caputo. She became TV’s favorite psychic with Long Island Medium. Her vivacious personality, voluminous hair, fake nails, and supposed ability to sense spirits in the most random places make her the perfect subject for comedy.

Kelly Ripa dressed as Caputo one Halloween, and SNL parodies this medium. While she makes for good entertainment, some also think she’s a fraud. There have been several investigations to prove it too.

Most famously, Inside Edition conducted an investigation to check this psychic’s credibility. The TLC star does live sessions before an audience with her Theresa Caputo Live! The Experience tour. Inside Edition enlisted Mark Edward, a mentalist who once called himself a psychic. He now reveals the various tricks of the trade psychics use.

He attended one of her live shows to get the deets. Unlike her TV show, where ghosts make furniture fly and she has a 99.9% accuracy rate, Caputo repeatedly struck out at her live shows.

One of the best parts of what I do is meeting some amazing inspiring people Got to be part of Leah's Birthday night and saw this little man again?#LiveTheExperience #birthdaygirl #meetandgreet #tour

As one of her shows went, she repeatedly asked audience members if their mom passed away only for them to answer that their mothers are very much alive. Edwards revealed that Caputo adopted an old psychic trickery called “cold reading.” The psychic fires off open-ended questions to a large audience until they find someone who can relate to any of it.

Edwards also claimed that Caputo uses the term “piggy-backing” when she blunders. If she says something untrue, she blames it on the “spirit” saying it was meant for someone else. “When the spirits piggy-back they will give me things you can’t connect with but others can…Piggy-backing is a brilliant excuse,” said Edwards.

A Long Island publication published a piece by a reporter who had a personal experience with Caputo’s psychic abilities. Caputo contacted this person claiming she had been visited by her deceased father’s spirit. She described the deceased perfectly and relayed the message.

The writer was convinced Caputo is a real medium and went to one of her shows. This reporter described the same “cold reading’ experience as Edward, which raised doubts about the supposed psychic. The reporter also noted that some of the audience members Caputo questioned held one of the few backstage passes to her show.

More reports claimed that her staff interviews people in the audience beforehand so she can pretend to have intimate knowledge about them from the deceased.

Congratulations to the beautiful amazing @chrissymetz on her Emmy nomination ??????#emmy #thisisus #congrats

It’s not the first or the last time Caputo’s craft has been criticized. The James Randi Educational Foundation, which demands scientific proof for paranormal claims, awarded her the tongue-in-cheek Pigasus award for paranormal and psychic frauds. In response to the Inside Edition exposé, Caputo issued a statement saying. “I respect and understand skeptics.”

“I’m not trying to prove anything to anyone, that’s not why I do what I do. I feel, and have been told by my clients, that my gift has really helped them, and that’s all that matters to me,” read the statement.

Happy Birthday to my son my son! I couldn’t believe how much I could love until I held you in my arms for the first time ?So handsome on the outside and so beautiful and sweet on the inside Make 27 the best! Love you to the moon and back ❌⭕️❌⭕️

She built her own armory of science-backed evidence by going on Fox and Friends, claiming she had her brain tested for “psychic abilities.” She explained that her brain was scanned by a doctor when she channeled and the result showed brain activity different than normal folk.

“They did find that I do access a part of my brain that we typically don’t and that my brain actually goes blank,” Caputo said while promoting her book, Good Grief, “It’s almost like it flatlines. Like, it’s clear as I’m channeling.”

On the same show, she shared that she discovered her abilities at a late age. Growing up, she could sense things others could not. “I always said since I was a young child, ‘Mom, I don’t feel right. I don’t feel like I belong. I feel different.’” She revealed that her ability gave her anxiety.

Despite the skepticism, Long Island Medium has its fair share of fans, many of them also celebrities. Some of them include Sopranos star Jamie-Lynn Sigler, The Big Bang Theory’s Jim Parsons, and All My Children’s Susan Lucci.

There are those who will scoff at the words “real” and “psychic” being used together, but Theresa Caputo maintains that she has changed lives. “You know, everyone is entitled to their own opinion. But you speak to the people that I channeled their loved ones and it has changed their lives in a positive way.”

Long Island Medium may be entertaining on a whole other realm but we recommend you take Theresa Caputo’s words with a grain of salt.