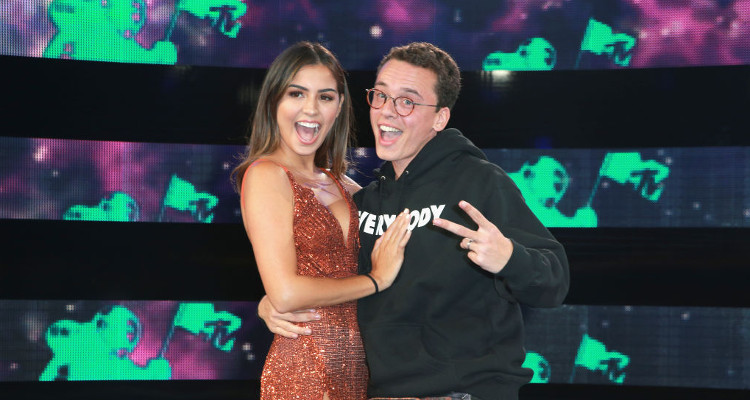 Logic and his wife, Jessica Andrea, have been married for just over two years, and until recently, it looked like they couldn’t be happier together! Their last public appearance together was at the 2018 Grammys, and the pair was all smiles, striking adorable back-to-back Charlie’s Angels-style poses with finger guns in the air. And now, reports are stating that the couple may be on the verge of divorce. They’ve already separated, and Logic’s wife has unfollowed him from various social media accounts, leaving many fans confused and heartbroken over this alleged breakup! Keep reading to get the full scoop on Logic and Jessica Andrea’s divorce rumors.

The American rapper known as Logic is a huge mainstream music star, who is famous for giving stellar and poignant performances with beloved singers like Alessia Cara. But his wife, Jessica Andrea, is equally noteworthy for her own vocal talents.

As a show of support for each other’s careers and a true demonstration of the very definition of #relationshipgoals, the pair has delivered outstanding live performances together on a few separate occasions.

Although most of the mainstream focus tends to be on Logic himself (because he’s ultimately the bigger star), there’s a lot to be said for his potentially soon-to-be former wife.

Our Jessica Andrea wiki has everything you need to know about Logic’s wife. And certainly some facts may surprise you!

On August 18, 2017, Jessica Andrea released her highly anticipated debut EP titled Electric. It features the title song and other widely-lauded hits like Medicine and Fake It.

Aside from being a wildly popular musician in her own right, Andrea is also a well known social media influencer. She has accumulated thousands of fans across all of her social media platforms!

A Marriage in Distress

Logic, whose real name is Sir Robert Bryson Hall II, and Jessica Andrea got married in October 2015 after only dating for a short while. Since then, they’ve been living in what seemed to be absolute marital bliss!

However, fans are now finding out that appearances can be very deceiving. Perhaps the couple wasn’t actually as happy together as they seemed to be in all of their cutesy online videos and public appearances.

For a while there, Logic and Andrea were really giving Ryan Reynolds and Blake Lively a run for their money as one of the goofiest and cutest couples on social media! It seemed obvious to everyone that the two were going to be together forever!

The couple had absolutely no qualms about sharing every silly and intimate moment they had together with their fans. And given Logic’s past negative stance on relationships, it was nice to see him with someone he could happily share his life with.

The duo stunned the audience and fans alike when they showed up at the 2018 Grammys. They adorably posed side-by-side for the cameras—with a mix of classy and funny expressions!

It’s hard to believe that Logic and Jessica Andrea aren’t together anymore! What’s worse is that now there’s no telling what will happen to her music career considering she was signed onto her husband’s label, Elysium.

What will become of Jessica Andrea’s upcoming musical projects? Will she and Logic continue to work together?

Only time will tell. But the fact that the couple unfollowed each other on social media says a lot.

Sifting through Jessica Andrea’s Instagram, it’s easy to see why she’s gained such a massive following of nearly 800k! Her entire profile is filled with pictures depicting happiness, positivity, and generally feel-good vibes that are insanely infectious. One thing is for sure; she definitely knows how to market herself and her music!

Andrea’s YouTube channel, which is dubbed According to Jess, has amassed over 500k subscribers (and counting) thanks, in large part, to her infectiously happy-go-lucky personality. The fact that she documents and shares a lot of her hilarious antics with her friends and family also helps!

Jessica Andrea, age 25, isn’t just a grand musical talent and famous celebrity, but she’s also mastered the art of becoming a social media mogul! The more she performs and showcases her extremely relatable personality, the more followers she gains by the day!

Of course, it was her collaboration with Logic that really got her noticed. She sang as a background vocalist on some of his most famous tracks like Flexicution, and his anthem-raising awareness song for suicide prevention titled 1-800-273-8255.

It’s almost sad to think that the world may never see any future musical or romantic collaboration between Jessica Andrea and Logic!

When Logic and Andrea were asked about whether they’re planning on releasing any new music in the next little while, the answer was unanimous. Logic will be focusing his energy more on furthering his record label, Elysium, while Andrea is currently working on a new project of her own.

Andrea didn’t specify whether the project is going to be a full-length album, a mixtape, or an EP. But she did mention that the new single will be released in March, and the release date for the entire project is set for sometime in May!

When asked what type of vibes the new project will have, the self-proclaimed “pop princess” exclaimed, “I love pop music, so that’s what I’m focusing on.”

We look forward to hearing Jessica Andrea’s new music when it comes out and will keep you updated on this story as more details are released! In the meantime, you can currently stream Logic’s latest mixtape, Bobby Tarantino II online.