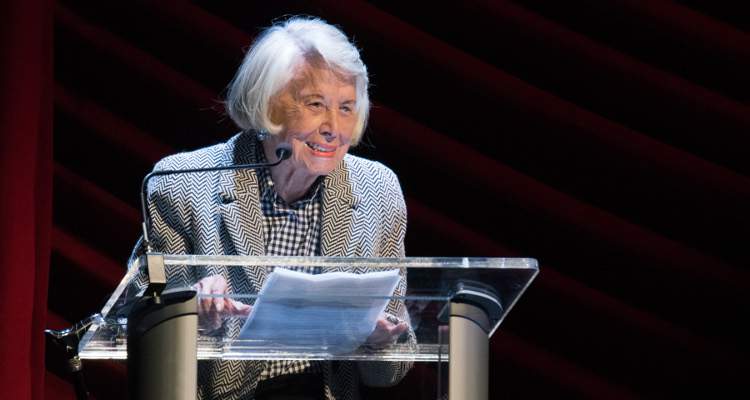 Iconic gossip columnist, Liz Smith passed away on Sunday (November 12). She was well-connected to the celebrity circles of New York City and had all the latest insider news. Her columns earned her several monikers, most famously, the Great Dame of Dish. To celebrate the queen of gossip and her legacy, we’re sharing Liz Smith’s wiki right here.

#1 She is from Texas

Sloan and Sarah McCall Smith’s daughter, Mary Elizabeth ‘Liz’ Smith, was far from the effervescent tabloid queen she later became known as. Her father was a cotton broker with a gambling problem. The family had to sell their home and move during the Great Depression and struggled to put her through school.

The Fort Worth native graduated from the University of Texas with a degree in journalism. There she wrote for The Daily Texan and The Texas Ranger. She soon moved to New York where she rose to fame for writing insider news on celebrities.

She worked her way up, starting as a typist, a proofreader, and a reporter. She made her foray into media as a news producer for Mike Wallace at CBS Radio. She spent another five years at NBC-TV and even worked for Allen Funt on Candid Camera.

She wrote snippets of gossip as a ghostwriter in Hearst newspapers during the ‘50s. By the ‘60s, she was an entertainment editor for Cosmopolitan and simultaneously for Sports Illustrated.

#2 She was Awed by Celebrities

The gossip maven was known for her vivacious and good-natured writing on celebrities. She claimed she was awed by celebrities for a long time and chose not to build her fame on slandering celebrities but rather give an insider commentary. “I was this goofy starstruck kid, so in love with Fred Astaire and Ginger Rogers that I couldn’t see straight.” She couldn’t opt for a performing career, so she decided to become a writer.

Her ascent into the New York society began with a self-titled column in The New York Daily News in 1976. While there, her editors asked her to appear on the news broadcast, Live at Five, and she stayed with the program for 11 years. Her time on TV made her popular in the city’s social scene which helped her get the material for her column.

The unabashed social climber’s column was syndicated to nearly 70 newspapers and magazines with the advent of the Internet. She fit in the very circles she wrote about, and her column was a friendly refuge for celebs.

She got together with other famous women in the media and literary field, Lesley Stahl, Mary Wells Lawrence, and Joni Evans, to start wowOwow.com, a news website on culture, politics, and gossip.

She famously interviewed Ivana Trump fresh off her divorce from Donald Trump. Madonna was a regular mention in her columns including her famous 1996 pregnancy. “I didn’t always agree with what she said, or what she did, but the hysterical overreaction to her caused me, if not to defend her, then at least to put a more balanced perspective on her astonishing ongoing saga,” she said about writing on the “Material Girl” singer.

NY gossip columnist Liz Smith dead at 94 – this is an old Getty shot of her with @realDonaldTrump, Ivana and Ivanka in 1987 pic.twitter.com/HsMZM5oco6

She may have been accused of lacking objectivity, but mingling with the rich and famous made Smith a celebrity herself. She was one of the highest-paid print journalists at one time and the only columnist to have a column printed in three major New York publications at the same time.

Her net worth hasn’t been calculated, but her annual income reportedly exceeded $1 million. Despite a wealthy social presence, she claimed there was a time she struggled because of Rupert Murdoch.

After leaving Daily News, she wrote for Newsday and later, simultaneously for The New York Post. The Rupert Murdoch-owned Post lured Smith from their rival, Daily News with a bigger pay. At The Post, she made appearances on Fox News for seven years.

More than a decade ago, the then 86-year-old Smith was let go from The Post. In 2015, she said in an interview that she was shocked by her ouster. “I thought I was indispensable. Looking back, I just wasn’t what the powers that be wanted,” she said. She even asked Murdoch for her job back, but he said he couldn’t interfere with editorial matters.

“The whole thing hurt my feelings and my stature as a columnist. I’ve had to struggle to make an adequate living since then,” she added that coming from Daily News meant she was never fully accepted into The Post.

Liz Smith, iconic columnist, and the woman who knew everyone's secrets has died at 94. pic.twitter.com/CQ5Goh0vxU

#4 Liz Smith Was Admittedly a Bisexual

After more than two decades of fame, the grande gossip girl became the subject of gossip herself. Tabloids tried to expose her sexuality to which she responded with the money quote, “Who am I, the great lesbian of the Western world? They want me to go out, and I want them to go in!”

Was Smith really a lesbian? She didn’t care if her sexuality was outed, but she did set the record straight in her memoir, Natural Blonde. She admitted she was bisexual or as she dubbed it, “gender neutrality.”

Her sexuality sent the rumor mill in a spin when the infamous publicist Bobby Zarem used her for a stunt. The two had a three-decade-old feud which began with Smith writing on Zarem’s clients. When he told her to stop, she turned her target to him.

In retaliation, Zarem sent out wedding invitations that said Smith is marrying her longtime friend, socialite Iris Love. Though he denied it at first, he proudly admits it now. Smith claimed he is homophobic while Zarem says he doesn’t hate homosexuals, except Smith. The feeling was mutual.

When she was 21, she married George Edward Beeman a World War II bombardier. “But he wanted to be a rancher in Texas and I wanted to get out of there.” So, they divorced, and she enrolled at the University of Texas.

Although she didn’t want to stay married to him, she still cared for him. “Later, when I made some money, I bought him a truck and delivered it to him in Texas. He didn’t want to accept it. I said, ‘Yes you have to because my conscience hurts.’” recalled Smith.

In 1957, she married Fred Lister, a travel agent. Their marriage too ended in divorce in 1962.

Smith died on Sunday at her Manhattan home. She was 94. Her friend, Joni Evans confirmed she died of natural causes. She didn’t have any children from her previous marriages and left no immediate survivors.

How do u know when something becomes iconic? In the case of Broadway’s “Hamilton”, when a store devoted solely to “Hamilton” merch opens.