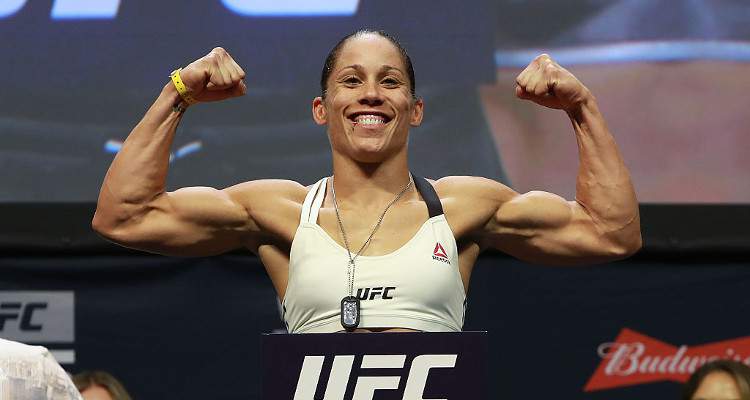 Liz Carmouche is a gay pioneer who smashed the glass ceiling for lesbian fighters in the UFC, when she came out in 2013 and fought her first ever UFC match against Ronda Rousey. Carmouche has seen the writing on the wall and believes that the time has come for UFC gay male fighters to be accepted and become champions. She is also spreading awareness for CBD oil, which in her opinion, could help athletes in pain relief. Carmouche may be speaking her mind on controversial issues, but her heart sure is in the right place.

A few years back, nobody would entertain the thought of the UFC accepting gay male fighters in their ranks, but times have changed. Now that the UFC has accepted lesbian fighters like Liz Carmouche in their fold, the day will surely come when a UFC gay male fighter will delight fans with his fighting prowess.

Carmouche is the UFC’s first openly lesbian fighter. And she believes that the UFC is finally ready to accept a gay male athlete.

Liz Carmouche is lesbian and came out in 2013. She feels that public perception has changed since then, and the once unthinkable may finally happen.

My road to #wrestlemania begins now

Carmouche told TMZ Sports, “I do actually believe that a man could come out as openly gay and he could rise to the top.”

A Soldier and a Fighter

Before becoming a professional MMA fighter, Carmouche spent five years as an aviation electrician in the Marine Corps. During that time, she completed three tours of duty in the Middle East.

This is the sexiest gi I have ever seen. What's even better is it's gonna drive @boogeyman_tfs insane when I wear this in jiu jitsu later. #nogi #sexygi #ji #jiujitsu #hypnotik #interstellar #warmandpretty #ufc

Carmouche started her professional MMA career in 2010. She was ranked at No. 7 in the Unified Women’s MMA Rankings before vacating the bantamweight division.

In the beginning, Carmouche had severe doubts about how the UFC would treat a gay male fighter. But now, she feels differently because attitudes everywhere have changed with time.

I love @hypnotikbrand! Not only did they overnight this for me but it's such high quality gear. #hypnotik #hypnotikbrand #mma #ufc #wmma #nogi #jiujitsu #lizbomania #fighttime

Carmouche saw how LGBTQ fighters are being treated in MMA gyms, like her own gym, the San Diego Combat Academy.

Gay male fighters in the UFC isn’t the only issue that Carmouche is raking up. She is also a vocal advocate of athletes using CBD oil.

CBD stands for cannabidiol and Carmouche has become a spokesperson for HempMeds. She is working hard to spread awareness on the therapeutic benefits of CBD oil for both athletes and those looking to lead healthy and active lifestyles.

This Is a Call

The world is changing but will the UFC get with the times? Carmouche thinks that they will, and has sounded the clarion call for them to accept gay male fighters into their ranks now.

Look what I got today. Special edition deathwish coffee mug for being on the podcast. #ilovecoffee #coffee #deathwish #deathwishcoffee #caffeine #getinmybelly #itslikechristmas

As they say, once a fighter, always a fighter!