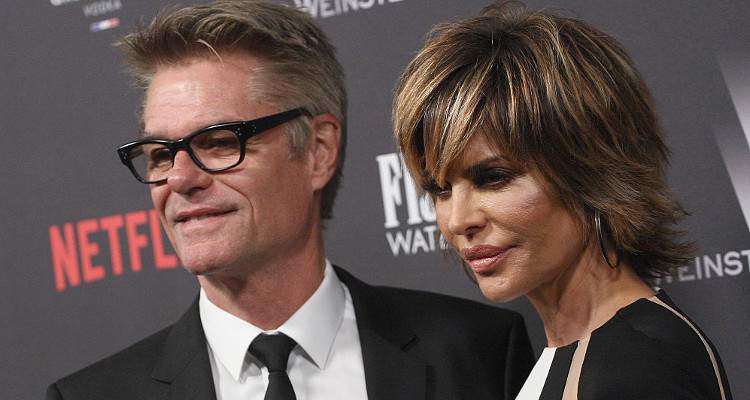 Tuesday nights are for RHOBH, and when it comes to drama, these housewives never disappoint! Their husbands are not too bad in the drama department, either! After Harry Hamlin’s run-in with Kyle Richards earlier this season, fans want to know more about Lisa Rinna’s husband. We’ve got the scoop about him, right here, in our Harry Hamlin wiki!

He may be known as The Real Housewives of Beverly Hills star Lisa Rinna’s husband, but Harry Hamlin has been in the showbiz spotlight for a long time.

Hamlin is an accomplished Emmy-nominated film and television personality, who appeared on some of TV’s most popular shows. He has been married to Lisa Rinna for 20 years.

Although he is not officially part of the reality show, Hamlin adds to the drama and controversy on RHOBH! So, keep reading to know more about Harry Hamlin’s career and private life.

Acting Is His Passion

Born on October 30, 1951, in Pasadena, California, Harry Hamlin’s age is 66. He comes from an affluent family, as his father was an aeronautical engineer and his mother was a socialite.

As a teenager, Hamlin attended Flintridge Preparatory School near Pasadena, and a private boarding school in Pennsylvania. He graduated from Yale with a degree in drama and psychology in 1974.

Hamlin’s love for acting took him to the American Conservatory Theater where he earned a Master’s degree in fine arts. His first stage performance was Equus, after which he was noticed by director Stanley Donen.

Harry Hamlin’s television stint began with Taming of the Shrew in 1976. After that, he went on to appear in numerous ‘70s and ‘80s TV shows like Studs Lonigan, Master of the Game, and Space.

Hamlin made his big screen debut by playing Perseus in 1981’s Clash of the Titans. He became famous as the character from Greek mythology and reprised the role in the 2007 video game, God of War II.

The actor’s career hit a blip with controversial films like Making Love and Blue Skies Again, but he managed to turn things around.

Hamlin went back to acting on television in NBC’s L.A. Law and rose to fame as attorney Michael Kuzak. He also appeared in season 6 of the hit show, Mad Men, for which he received an Emmy nomination.

Lisa Rinna and Harry Hamlin appeared together on Veronica Mars in 2004 where they played a married couple.

My wife just posted this.

The couple also had a reality series based on their life and family called Harry Loves Lisa in 2010. Even though it was popular when it first premiered, the show only ran for one season.

In 2017, Hamlin was part of the TV series, Shooter, starring Ryan Phillippe in the lead role.

With such a long and successful career, Harry Hamlin’s net worth is estimated at $10.0 million.

After his appearance in Making Love, many people questioned Hamlin’s sexuality. So, is Harry Hamlin gay?

We don’t think so! He has been married to Lisa Rinna since 1997, and they have two beautiful daughters, Delilah Belle and Amelia Gray Hamlin. Both girls are models.

Lisa Rinna still had to deal with the rumors of her husband being gay while on RHOBH, but she was quick to defend him.

Rinna said, “Marriage takes work, and there’s a reason why we are still together. If you go and do a show and your marriage is already in trouble, then it will come out. If you’re solid, nothing can shake you. And nothing—not even Housewives—can shake Harry and I.”

Hamlin was previously married to actresses Laura Johnson and Nicollette Sheridan. He was also in a relationship with Bond girl Ursula Andress in the ‘70s. He has a son, Dimitri, from that relationship.

Creating a Storm on RHOBH

Hamlin is no stranger to controversy, and he created a stir even before Lisa Rinna’s The Real Housewives of Beverly Hills appearance.

In a 2015 interview, Rinna shared that at first, her husband threatened to divorce her if she agreed to do the show. She also revealed that Hamlin later changed his mind. It was only then that she signed on to the show and said it would be good for her.

Hamlin continued in the eye of the storm with his Halloween swastika shirt in 2015, and then his run-in with Kyle Richards earlier this season.

When it comes to Harry Hamlin drama, we’re sure lots more is in store for fans! For more, keep watching The Real Housewives of Beverly Hills Tuesday nights on Bravo.