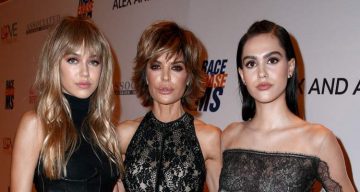 Real Housewives of Beverly Hills star Lisa Rinna’s daughters are all grown up and ready to face the world. But as a mother, Rinna is very concerned about protecting her teenagers from sexual predators. Here’s what you need to know about Amelia Gray Hamlin and Delilah Belle Hamlin.

The Hamlin sisters are slowly making their own fan base and coming out of their mother’s shadow. The girls already have social media followers in the thousands, and we’re sure they’re already on their way to become A-list models! Here are some facts you need to know about Lisa Rinna’s daughters’ modeling career.

Delilah Belle Hamlin is the first-born daughter of reality TV star Lisa Rinna. She was born on June 10, 1998, making her age 19.

The pouty-lipped beauty is a professional model. She was signed with coveted modeling agency Elite Model Management.

According to her Instagram page, Hamlin is currently working with IMG Models. They have given the world Karlie Kloss, Kate Moss, and Candice Swanepoel, among other beauties.

Delilah Hamlin became an Instagram sensation, and fans couldn’t help but compare her to Gigi Hadid. And while many people recognized the Hamlin sisters in the same league as the Hadid sisters, Hamlin said that she never planned on being in the spotlight as a model. Hadid, on the other hand, has been at it since the age of two when she appeared in a Guess ad.

playing dress up with @dolcegabbana is always a good time xo thank you so much for an amazing weekend !!

“I never really thought about it, but Instagram kind of just made it happen. I was posting pictures of myself, and an agency was like, ‘We want to represent you.’ And that’s kind of how it happened,” explained Hamlin.

Delilah Hamlin has over 500,000 followers on the world’s most popular photo-sharing app. And she credits this platform for her modeling success.

Hamlin made her TV debut in 2010, along with her sister, Amelia Gray Hamlin, and their father, Harry Hamlin. Since then, they have been in the eyes of the media alongside fashion designers.

Mi Familia ♥️ I love them so much. ♥️♥️♥️ #family #Grateful #Blessed and #mypeople

Delilah Hamlin has walked at the New York Fashion Week for Tommy Hilfiger, Dolce & Gabbana, and Sherry Hill. She has also done photo shoots with big brands like Alexander Wang.

Today, Hamlin enjoys a very envious lifestyle—hanging out with some of the most famous models and designers—and she’s still only 19.

On Becoming a Spy

Delilah Hamlin said in an interview that she would love to move to the Big Apple and study psychology or criminology as her graduating degree. She even said that she always wanted to be a spy since she was little.

But for now, modeling is taking up most of Hamlin’s life. And she has already appeared on the covers of mega fashion magazines like Grazia and Vogue!

It looks like the couple has been dating for more than two years now. And, they look like they are in it for the long haul!

Here are some Instagram photos that show off Delilah Hamilton’s boyfriend.

Thank you @quayaustralia & @golden_barbie for having us (p.s. I suggested the idea of Aidan wearing these glasses and he was fine with it-didn't force him)

Just like her older sister, she is also a model, and is signed with modeling agency IMG Models. She signed with them in June 2017, and has stuck to them since. They describe her style as effortless and seem to have fallen in love with her full brows!

Although the 16-year-old wants to become an astronaut, she also loves modeling. Can this be a teenager’s fickle mind?

Nonetheless, Hamlin has become successful in modeling. And in an interview, she said that she was pretty confused when her older sister was already getting signed.

Amelia Hamlin wanted to explore her options but later realized that modeling was the way to go and said, “I’ve also learned how difficult it can be, and I’ve developed a very different kind of respect for supermodels.”

Amelia Hamlin is also an Instagram favorite with more than 200,000 followers. And although her following isn’t as high as her sister’s, it’s impressive nonetheless.

Hamlin uses the platform to its hilt and posts pictures of her Vogue photo shoots, backstage pictures with fellow models, and all the traveling that comes with her job.

Am I dreaming? So excited to announce that I'm a new member of the @imgmodels family! This has been a dream and a goal of mine for so long. I am so grateful to have such an amazing team believing in me. Check out the full story behind me getting signed at @wmag ??

Amelia Hamlin loves to live her life to the fullest. Outside of the fashion world, she loves sports. She’s played tennis for some years and has even had some boxing training.

Hamlin loves astronomy, an interest she shares with her father. And, she calls herself a “total science geek.”

The aspiring astronaut’s Alpha NASA bomber jacket is one of her favorite items in her wardrobe. But she can’t get enough of designer wear, too!

If ever Amelia Hamlin ever goes to outer space, the mission will be the most stylish one in launch history!