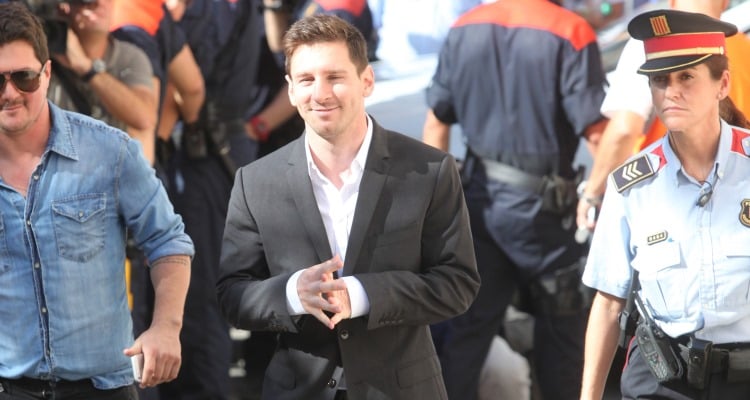 Lionel “Leo’” Messi is a professional world-class Argentine footballer with a predicted net worth of up to $220 million. He is one of the most recognized soccer players of our time and holds some outrageous records in the sport, some of which haven’t even been touched yet by his competitors. Lionel Messi has taken the game to a whole different level and hasn’t seized to quit, ever since the first time he kicked a football.

From Barcelona to Argentina

Although he played from an early age, Lionel Messi first got the passion for soccer from his grandmother, who used to accompany him to matches and training sessions when he was a kid. Despite some health and financial setbacks, Messi was officially signed by FC Barcelona (Futbol Club Barcelona) and officially started playing with the youth team in 2002 when he was just a teenager.

His initial success as a young talented forward is what eventually got him into the Argentina national team. And it is playing for these two teams that have made Lionel Messi what he is today. He is the only player to have won the world’s most prestigious soccer award, FIFA Ballons d’Or, five times consecutively from 2009 to 2012 and then again last year. He is also the first player to win the prestigious European Golden Shoe three times, and holds several Guinness World Records for his high scoring averages.

Messi has earned millions for being the FIFA World Player of the Year in 2009 when he was only 22 years old. His payouts for Copa America Tournaments have been estimated to be over $17 million per league. And Messi has reportedly made upwards of $20 million for playing in the 2014 FIFA World Cup. His overall earnings as a football player are what placed him at number four on Forbes’ 2015 list of the highest-paid athletes in the world, with a pay value of $73.8 million. And in 2014, he was said to be taking home almost $1.1 million a week.

The Messi vs. Ronaldo Rivalry

Just like any past sports rivalries, the Lionel Messi and Cristiano Ronaldo rivalry isn’t any different—Messi has been compared to the popular Portugal forward ever since they both started making it big in the game. Their famed competition is even seen in their records, as Ronaldo tries to close in on Messi’s skill to become the world’s greatest soccer player. Ronaldo has won only three Ballons d’Or awards compared to Messi’s five, but he has four European Golden Shoe awards while Messi only has three. They even happen to contrast in personalities, as Cristiano Ronaldo is known for his self-confidence and theatrics, while Messi is more private and loved for his humility.

Comparisons are often even made when it comes to earnings; while Messi’s net worth grew by $51.8 million in salary/winnings (excluding endorsements) in 2015, Ronaldo’s net worth grew by $52.6 million, according to Forbes. Their rivalry is so well-received by their fans that whenever they face-off in any match, the game’s viewer ratings seem to skyrocket.

Endorsements and the Leo Messi Foundation

Messi reportedly makes around $22 million for his endorsements. He has sponsorship contracts with big brands like Samsung and Tata Motors, and has become a lead endorser for sporting giant Adidas. The company has even launched his iconic line of shoes and apparel. He’s also been a brand ambassador for Turkish Airlines and Gillette. It’s no wonder that Messi was named by SportsPro as one of the “most marketable” sports figures every year since 2010.

However, the humble 28-year-old is more generous than his other soccer contemporaries. As a long-time contributor to UNICEF, Messi has served as a goodwill ambassador for the organization since 2010. He also established his own charitable trust, the Leo Messi Foundation, in 2007 as a means to help provide children with access to health care, education, and sports through grants, financing for medical training, and the development of health centers throughout the world. After being diagnosed with a major disorder (growth hormone deficiency) himself at a young age, Messi is surely making an effort in helping those children who are suffering just as he had. After all, it’s his huge heart that has made him esteemed, and has added many values to his huge net worth.

His Mansion and Future Home

Messi owns an extravagant $5 million mansion in the Castelldefels neighborhood in Barcelona. Although not much is known about the interior features of this estate, what’s interesting is that in April 2013, Messi reportedly bought his neighbor’s property as well, simply because he didn’t like the ruckus they were causing. Now, there’s something that Messi can splurge on—total privacy! He reportedly purchased an apartment in the Pedralbes area of Barcelona, where he and his family stayed while their home was being expanded into the neighbor’s lot.

According to reports back in 2013, Messi was also planning on building a modernized, high-tech house that looked like the shape of a soccer ball from above, and with its entrance, it will look like a huge number 10 (Messi’s jersey number) positioned in the middle of a soccer field. The design appears to include a huge grassy field on the front half of the circle, but then the back half is covered entirely in water. The home was designed by famous Spanish architect Luis de Garrido and will likely take a good chunk out of Messi’s net worth if it ever does actually get built.

As far as his cars go, Messi has been seen driving a white Maserati GranTurismo MC Stardale, an Audi R8, a Ferrari F430 Spider, and a Dodge Charger.