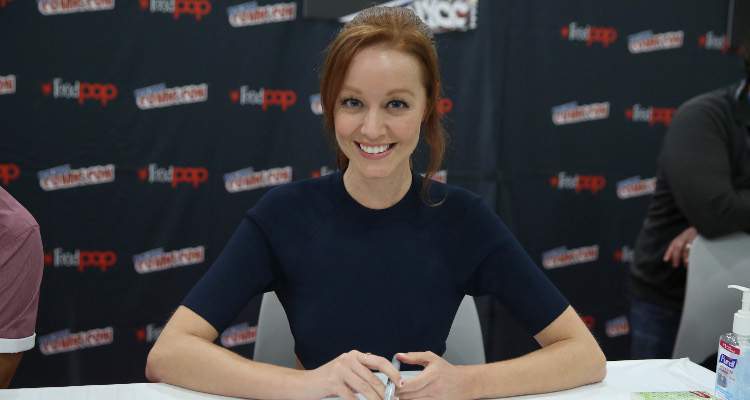 We’re going to see a lot of Lindy Booth on our TVs during the holiday season. The actress and the cast of The Sound of Christmas will liven up the festivities on Hallmark. And, she’s also returning this December for a new season of her TNT series, The Librarians. Learn all about the gorgeous actress in our Lindy Booth wiki, right here.

The actress keeps details of her personal life private. So, there’s very little information known about Lindy Booth’s family, besides her professional achievements.

She’s never shy about showing off her love for her beloved home country and Lindy Booth’s Instagram account confirms this. It contains posts of her showing off her temporary tattoo of Prime Minister Justin Trudeau and her Canada Day fashion. And, she appears to be a proud supporter of the Toronto Blue Jays, although she also cheered for the Los Angeles Dodgers at the World Series this year.

#2. She Started Acting Right After School

Booth pursued a career in acting right after graduation. But her early assignments didn’t expand beyond the horror and action genres.

In 2001, Booth starred in the mystery drama, Century Hotel, and horror thriller movies like The Skulls 2, Wrong Turn, Behind the Wall, and Cry Wolf. She even appeared in the Dawn of the Dead remake.

Over time, the actress broke out of the casting rut for more diverse roles. Booth is best known for starring in the Disney Channel series, The Famous Jett Jackson, and it’s follow-up TV movie and the show within the show, Silverstone. She also starred in Relic Hunter and the TV movie, Life with Judy Garland: Me and My Shadows.

Booth’s most recent and most famous work includes playing Night B***h in Kick-Ass 2. And, she stars alongside Rebecca Romijn in The Librarians, which is set to premiere season 4 soon.

Other notable credits include guest appearances on CSI: NY, Ghost Whisperer, and Supernatural, among a host of TV movies.

Despite a two-decade-long acting career, Lindy Booth’s net worth hasn’t been calculated.

The 38-year-old has next to no reports about her romantic life. So, there are no reports to suggest if she’s seeing someone special in her life or whether she has a husband.

There were rumors that Booth was married but those are unfounded. Some suggest that she’s too busy with her professional life and has no time for relationships.

While we think it’s Booth’s choice, we can see on her Instagram that she does take time out for her family.

Booth has been seen hanging out with her mother a few times. They recently went to a Blue Jays game together.

The talented actress also knows how to make the most out of work. She gives a glimpse at her dramatic costumes and awesome filming locations for The Librarians often.

Check out the new fantastical persona (Lindy Booth’s character) Cassandra will display when The Librarians season 4 premieres on December 13!