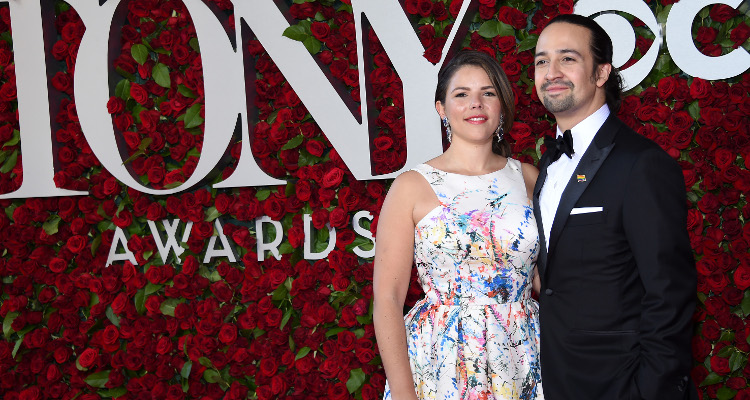 We could go on and on about Lin-Manuel Miranda’s talents and achievements. But we think his cute date to all his red carpets deserves some attention, too. Lin-Manuel Miranda and Vanessa Nadal make for adorable #CoupleGoals. We’ve got the scoop on them here.

Lin-Manuel Miranda is rallying support for his native country of Puerto Rico, that is currently going through a time of crisis. The Hamilton star has been active as a social voice and he’s not only got millions of supporters, but he’s got his wife by his side. Vanessa Nadal is the proverbial woman behind her husband’s success, the Eliza to his Alexander Hamilton. And she’s always arm-in-arm with during the biggest moments of his career. Here’s what you need to know about Lin-Manuel Miranda’s wife, Vanessa Nadal.

Miranda is famous for churning out songs and musicals one after another, working tirelessly; a quality also present in his wife. Nadal is just as hardworking in what she does. She is an attorney, who works in the field of science. According to her Twitter bio, she’s also an engineer.

She graduated with a degree in chemical engineering from the Massachusetts Institute of Technology and went on to study law at Fordham University School of Law. She previously worked in the R&D wing of Johnson & Johnson developing anti-aging products. She’s currently an associate at Jones Day in New York City with experience in federal, state, and international cases.

Through her Twitter, we can see that she is a strong proponent of scientific causes. She attended Climate Science Legal Defense Fund Gala with her husband recently, and is calling for young attorneys to join the cause.

Where math transcends human language. An inspiring story about following your passions (and teaching yourself calculus…). https://t.co/oDHfe5QRJO

#2 They Went to High School Together

Both Nadal and Miranda went to Hunter College High School in NYC, where Miranda was two grades above her. But theirs was not a puppy love that bloomed to romance. They actually didn’t reconnect until much later.

Miranda was popular in high school where he wrote musicals and plays, but he never got himself to talk to the sophomore. “She was gorgeous and I’m famously bad at talking to women I find attractive,” said Miranda, “I have a total lack of game.”

Nadal was a dancer, but unlike Miranda, she wasn’t looking to be popular. They didn’t have much of a relationship in high school before they parted ways to their respective colleges.

#3. They Bonded over GTA

Years later, a struggling artist that was Miranda got his first break with the Broadway musical, In the Heights. He stumbled across the Facebook profile of an old high school crush who listed hip-hop and salsa as her interests.

Miranda invited Nadal to a show by his hip-hop improv group, Freestyle Love Supreme. She not only came to his show, but joined his troupe for drinks after.

He didn’t get her subtle hints that she was interested in him, though. So, she asked a friend to pass him her number and weeks later, he invited her to another show. They went out with a large group of friends again and were leaving together, when she randomly compared the sight outside to Grand Theft Auto, his favorite game.

“I very coolly said, ‘All right, you’re going to come over to my house tonight, and we’re going to play Grand Theft Auto and watch the Jay-Z movie and listen to Marc Anthony.” Their relationship progressed from there. The following weekend, they were official, and soon they exchanged apartment keys.

#4. He Gave Her a Wedding Surprise

After Nadal shifted gears to law and Miranda established himself in Broadway, they tied the knot in September 2010. Their wedding in the Belvedere Mansion in upstate New York was attended by Broadway royalty. And with so many musical stars at the wedding of a musical genius, it had to be a musical affair!

The wedding had a chorus of Broadway singers with a 22-piece orchestra performing for the bride and groom. And if that wasn’t enough, Miranda secretly coordinated with Nadal’s family to put on a performance of Fiddler on the Roof’s “L’Chaim!” Their fathers, her relatives, the bridal party, and some guests worked a month with Miranda for the performance.

Needless to say, his bride was sufficiently surprised. Check out Nadal getting serenaded by the wedding party below.

#5. He Composes Sonnets for His Family

Four years after their lively wedding, Miranda and Nadal welcomed their first child, Sebastian Miranda in 2014. Around that time, the multi-award-winning composer was preparing for Hamilton to debut in theaters. He announced his son’s birth with a sonnet on Twitter.

As adorable as that is, little Sebastian doesn’t get dibs as his dad’s muse. That honor goes to Mrs. Miranda. Among his many acceptance speeches, Miranda is known to wax lyrical for his wife, giving her a shoutout in his poetic speeches.

“My wife’s the reason anything gets done,” he rhymed as he took home the Tony Award for Best Original Score, “She nudges me towards promise by degrees. She is a perfect symphony of one. Our son is her most beautiful reprise.”

[The screams reach a frenzied pitch. SEBASTIAN MIRANDA enters. He is 7 pounds 10 ounces.]

End Of Act One. pic.twitter.com/qy2VUomSeB