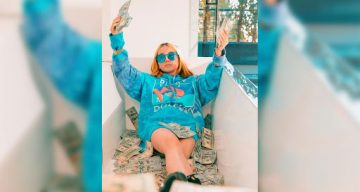 Lil Tay showing off money in a tub. Credits: Instagram/liltay

We found potty-mouthed nine-year-old Lil Tay’s mom! She is reportedly Angela Tian, a realtor from Vancouver, Canada. Tian has been shamed on the Internet for letting her daughter film questionable videos for Instagram. And now it seems she was fired from her job.

Lil Tay’s mom, Angela Tian, was working as a realtor at Pacific West Realty in Vancouver, Canada before was allegedly fired from the job. She reportedly made a video with Tay using her boss’ Mercedes without permission!

Angela Tian Resigned Just Before She Could be Fired

Tian is actually Lil Tay’s manager. And she has been making sure that her nine-year-old daughter becomes a social media star for all the wrong reasons.

Lil Tay, who calls herself the “youngest flexer of the century,” now has more than 2.1 million followers on Instagram. She has been making N-word-loaded videos while showing off all her supposed riches.

Other sources say that Tian was not fired and that she resigned before she could be. Maybe she found a cash cow in her daughter?

But according to some reports, Angela Tian was “dismissed” after her company figured out that she was involved in Lil Tay’s social media mayhem.

“There is no place for this sort of activity in our industry. Angela has only been a realtor with our brokerage firm for only six months,” said the director of Tian’s company, Jim Lew, in an interview with Daily Hive.

Now followers and haters of the social media brat are asking how her mother allows her to make such nasty videos and get away with it. Many are blaming her parenting.

Lil Tay’s Antics Have Made Her Popular

The little girl is seen in videos using all kinds of foul language. She rants about people being broke and that even her “toilet costs more” than their rent.

Lil Tay has been seen flaunting luxury cars, Gucci clothes, and luxury brand accessories. And in one such video, she explained that she was able to afford these items because she “moved bricks” to become rich.

While people were left scratching their heads, it could either mean that she was dealing drugs or that she worked in construction. The “brick” alludes to drug terminology meaning a “brick” of cocaine. Why a nine-year-old is talking about “moving bricks” has all kinds of people up in arms—and they’re blaming her mother.

Many despise Lil Tay and her mother for spreading the wrong message to the youth of today. Meanwhile, others find her mildly funny and love to see the next new luxury item she buys.

Nonetheless, Angela Tian has yet to come forward and address the rumors surrounding her. And when she does, we hope to get an explanation as to why she let her young daughter get into cussing and bragging for fame!