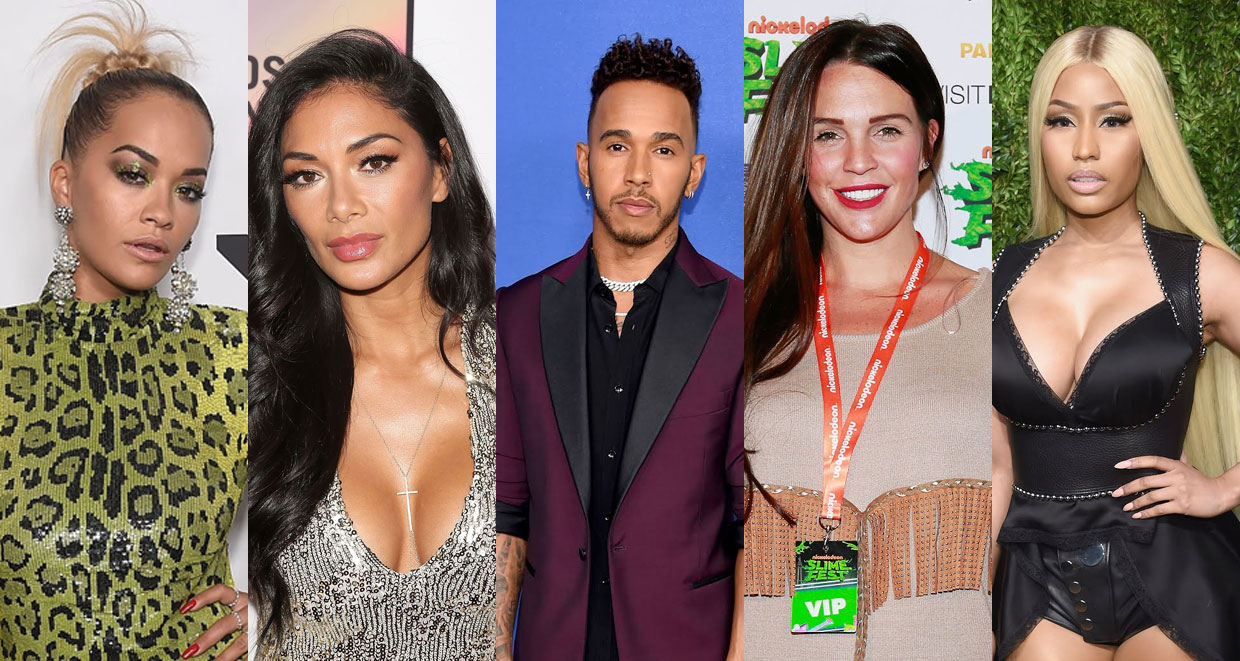 Pop stars, models, and pageant girls—Lewis Hamilton has dated them all! Now the Formula One Champion might be in a new relationship! Fresh off the heels of being crowned the highest paid driver in F1 history, Hamilton has been flaunting on Instagram his closeness with rap goddess, Nicki Minaj. Did Hamilton and Minaj make their relationshipInstagram official? Let’s delve into the racer’s alleged new relationship with our Lewis Hamilton dating timeline.

Nicki Minaj and Lewis Hamilton have been fueling dating rumors ever since they attended New York Fashion Week 2018 together.

During her recent appearance on The Ellen DeGeneres Show, Minaj casually mentioned that she was seeing two guys. And apparently, she zeroed in on one of her prospective boyfriends.

“There is a new boy, but he and I have kind of fell back a little bit,” said Minaj.

The “new boy” could possibly be 33-year-old Lewis Hamilton. The duo enjoyed Minaj’s time off in Dubai riding ATVs and sharing photos on their respective Instagram pages.

They haven’t officially confirmed their relationship, and their Instagram posts don’t exactly give anything away. But their followers think that these two are together.

Former America’s Next Top Model contestant Winnie Harlow is best known for embracing her vitiligo condition and being one of the most inspiring role models. But her love life also got attention when she was reportedly dating Lewis Hamilton on and off for about two years.

Hamilton and Harlow were first spotted together in 2016 at the GQ Awards. They were once again spotted in Cannes in 2017.

While there’s no confirmation of Hamilton and Harlow being a couple, many speculate they dated on and off between Hamilton’s other romances.

Lionel Richie’s 20-year-old daughter is currently dating Scott Disick. But in early 2017, she was briefly linked to the F1 stud.

They were spotted together at the Paris Couture Fashion Week in January and having a lunch date in Beverly Hills in May.

The British racer met the Hungarian supermodel in Cannes in 2016.

According to sources close to them, they hung out and partied in the French city. But there was no confirmation that they were dating. And just after Hamilton’s reps stated they were only friends, Palvin was spotted cheering for him at his races.

But it appears Palvin’s alleged romance with Hamilton has taken a back seat now that she’s rumored to be dating Dylan Sprouse.

Hamilton was spotted with Rita Ora on several occasions over the summer of 2016. They not only partied together, but they also enjoyed a low-key getaway in Montenegro, fueling speculations they were a couple.

Ora was even spotted at the Abu Dhabi Grand Prix that year cheering on Hamilton. But with no confirmation about their relationship and the lack of further sightings together, the rumors soon fizzled out.

Rihanna and Hamilton’s friendship goes way back. But rumor has it that they took their friendship to a new level during the summer in 2015.

Hamilton was seen celebrating Kadooment Day in Barbados with Riri. They also spent a lot of time together in New York, too.

But Hamilton shut down rumors they were a couple, saying that they are just “good friends.”

Hamilton’s most publicized and longest relationship is with the former Pussycat Doll and X Factor judge Nicole Scherzinger. They met at the 2007 MTV Europe Music Awards in Munich.

The first of their many breakups was in 2010. However, they were seen together at the Turkish Grand Prix and Canadian Grand Prix that same year.

They would split up only to reunite several times over the years. But they finally broke up for good in 2015.

Post-split, Hamilton and Scherzinger have been taking subtle digs at each other.

Before Nicole Scherzinger, the motorhead had a whirlwind romance with the former Miss Grenada. Vivian Burkhardt represented Grenada at the Miss World 2007 and made it to the top 16.

They spent time in Cannes together, and even though we didn’t hear it from the alleged lovers themselves, Burkhardt’s mother confirmed they had been dating since February 2008. She said they exchanged letters and would go out on dates.

During their short-lived relationship, Burkhardt was accused of being a gold digger and after Hamilton for fame. But her mother denied that the pageant queen was fame-hungry.

So, naturally, there were rumors that they dated. But Hintsa denied they were anything more than friends.

Jodia Ma is the daughter of a Hong Kong-based businessman who was convicted of fraud. She met Hamilton, then a rising sports star, at the Cambridge School of Arts and Science. They dated for four years before calling it quits in 2007.

Ma’s father, Ma Bo-kee, was the one who gave Hamilton his first big break when he was struggling to find a sponsor. Hamilton admitted Ma’s contribution to his career in his autobiography.

Hamilton dated the model for around six months in 2002 before they broke up. They parted amicably and are still good friends.