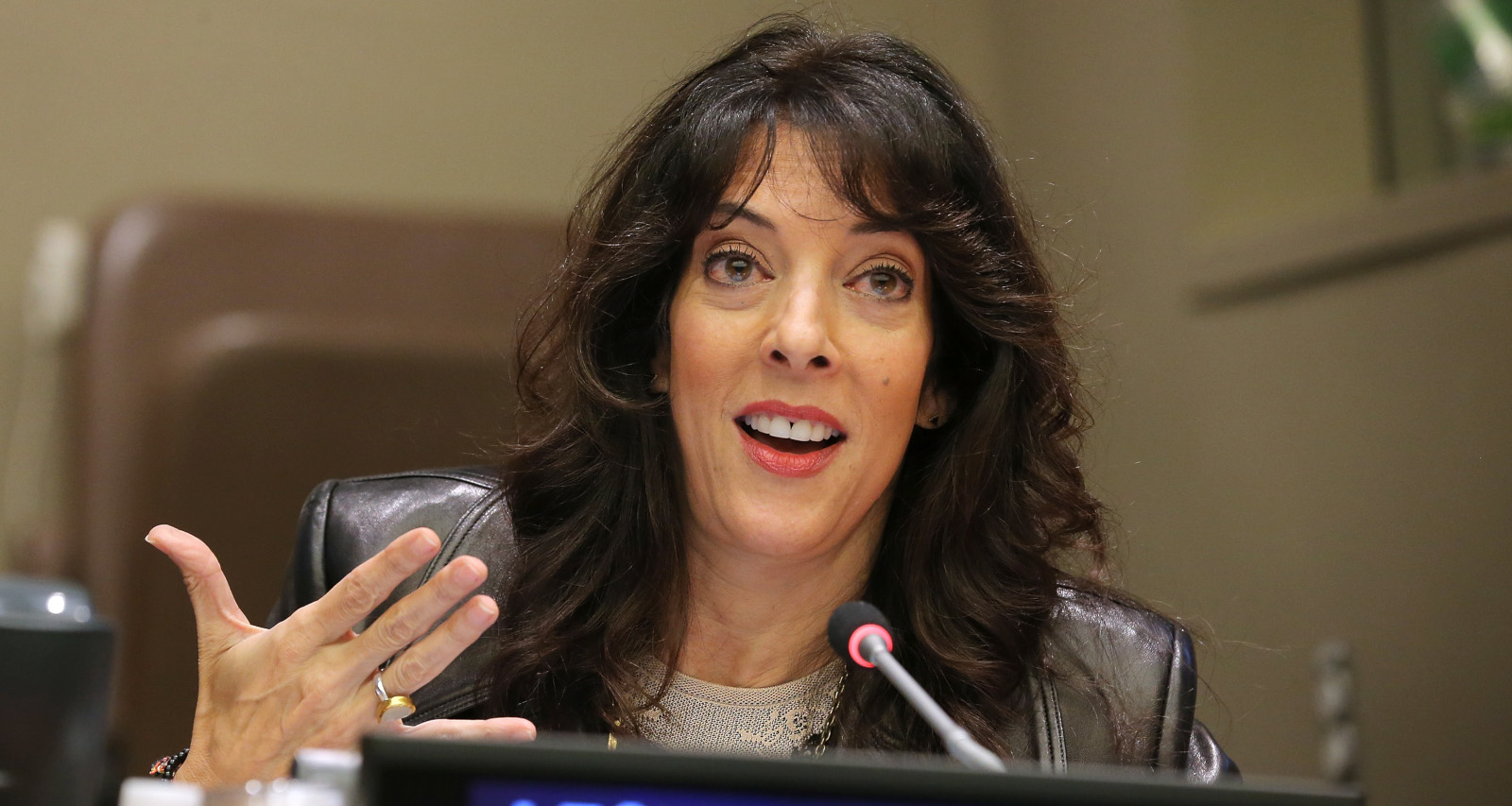 Before makeup experts were sharing morning makeup routines and tips to nail the perfect eyeshadow on YouTube, Leslie Blodgett was on the scene and became a pioneer among beauty gurus. The Bare Escentuals mogul built her empire on QVC more than two decades ago and is now one of the biggest success stories in the industry. If you haven’t heard of the super-cool genius behind our favorite Bare Minerals products, we’ve got Leslie Blodgett’s wiki for everything on the OG beauty influencer.

Leslie Abualy Blodgett was born on August 23, 1962 and grew up with her siblings in Smithtown on Long Island, New York. Blodgett has Hungarian, Italian, and German heritage through her parents.

Her parents were public school teachers. Her father, Stanley Abualy, was a science teacher who also had his own local science show for kids on TV before he passed away in 2000. Her parents divorced when Blodgett was a child and her mother raised her and her siblings as a single mom.

Her mother, Sylvia Abualy, was a home economics teacher at Smithtown High School West, which Blodgett also attended. Her mother retired from teaching and turned to professional photography in California.

When she was a child, Blodgett enjoyed being in the spotlight. She joined a local theater troupe, sang in the choir, and did the makeup for the shows. It was in the theater troupe that her interest in cosmetics was sparked. But she wouldn’t get into the industry until much later.

Sylvia Abualy, a 1970s feminist, pushed Blodgett to succeed in whatever she did. Blodgett credits her mother for giving her drive, but they had their fair share of troubles.

Blodgett’s relationship with her mother became somewhat strained when she decided to study modern dance at the State University of Oswego in New York.

Blodgett would drop out after two years and move to Plantation, Florida. She was waitressing at a Ponderosa Steakhouse there when her mother urged her to apply for a cosmetic marketing program at the Fashion Institute of Technology.

The program was taught by cosmetics icon Hazel Bishop, who created the smudge-proof lipstick. After graduating from FIT in 1985, Blodgett rose to one of the top marketing executives in the skincare industry.

Blodgett held an undying love for cosmetics and skincare products. During her time at FIT, she was a fan of Estee Lauder’s fragrances. She also worked at an Ultima II counter at a Macy’s.

She interned at Revlon for a while before finding a job in product development at Max Factor, creating a colorless mascara.

After marriage, she relocated with her husband and son to Baltimore, Maryland. Maryland didn’t have much to offer to her career, so Blodgett and her family moved to Los Angeles where she found a job at Neutrogena under Johnson and Johnson.

Blodgett was moving up the executive ranks in the skincare industry when a friend offered her the opportunity to rejuvenate a failing brand named Bare Escentuals.

Bare Escentuals, Inc. was founded in 1976, but became a phenomenon under its chief executive, Leslie Blodgett. When she came to the formerly struggling company, she turned her focus on its natural mineral makeup, which wasn’t getting much attention.

Blodgett improved the formula and created the bareMinerals cosmetic line under the Bare Escentuals umbrella. The new makeup line made its debut in New York in 1995, but sales were far from increasing.

Back then, cosmetic companies needed a famous face in Hollywood to sell their product. But a fledgling line like bareMinerals couldn’t afford the likes of Uma Thurman. So their chief executive Leslie Blodgett stepped up to sell the products herself.

Going down that memory freeway. @bareminerals

She went on QVC and explained how the bareMinerals products worked and propagated the swirl-tap-buff makeup application movement. She knew her product better than any spokesperson and was authentic, which appealed to QVC viewers.

She immediately struck a chord with women for her non-Hollywood appearance and slight speech impediment. She became even more relatable when she shared her stories about her experiences with skincare throughout her life.

Blodgett became an instant hit for QVC from the first time she appeared on the network. When viewers asked for more information on the QVC online forum, she’d respond to customers directly. She built a fandom that called themselves BE Addicts, becoming a major online beauty guru even before the advent of Facebook.

Blodgett’s first appearance on QVC was on August 30, 1997 (the day Princess Diana’s accident was a major headline) and sold out $180,000 worth of products. In a decade, she was selling $1.4 million worth of products through QVC.

In two decades, she turned the brand into an empire worth more than $100.0 million. She made the company public in 2006 and used unique marketing tactics, infomercials, and QVC appearances to attract buyers.

Blodgett eventually became one of the top successful women in business, with an estimated net worth of $400.0 million.

When Shiseido acquired Bare Escentuals in 2010 for $1.7 billion, the Japanese cosmetics giant stipulated a condition that Blodgett stay with the brand as its face. Though Blodgett is no longer the CEO, she’s still the face of bareMinerals.

Since leaving behind her executive duties at Bare Escentuals, Blodgett has traveled all over the world and given lectures to inspire women to follow their entrepreneurial dreams. She returned to school at Stanford and is a Fellow at the Stanford Distinguished Careers Institute.

She currently serves on the board of directors at Stella & Dot, Maternal Health Organization, Every Mother Counts, and SPANX Board of Advisors. She’s also an angel investor investing in multiple up-and-coming businesses.

A young Leslie Abualy married her husband, Keith Blodgett, in 1986. Leslie wore her mother’s wedding dress, which was made by Leslie’s grandmother who hailed from Germany.

Happy 32nd Anniversary My Love. We are so good together.

Keith Blodgett used to produce corporate films and commercials back then. However, he’s been a stay-at-home husband for the majority of Leslie’s career.

When the Blodgetts were new parents and had relocated to Baltimore, Keith decided to be the one to stay at home so Leslie could pursue her career. They would move to California where Leslie would join a Bare Escentuals that was on the verge of bankruptcy.

Leslie Blodgett’s Son Is a Chef

Blodgett’s son, Trent, was born in Baltimore in 1992. Growing up, Keith was in charge of the cooking and Trent developed his love for food from his father.

After trying various career options, Trent found that his calling was in the kitchen and he worked in various San Francisco kitchens. He’s now the founder and head chef of San Francisco-based Spice Tribe, which sells responsibly sourced, fresh spice blends.

Trent is also a dad to Zavian Rey Blodgett with his partner, Nikko. These days, Leslie is a doting grandmother on Instagram, posting pictures of Zavian as often as she can.

Just because I love being a #grandma #zavian #babyboy. #9monthsold #blessed. #cute

She Ended a Feud with her Sister

Leslie Blodgett is a middle child who has a brother and a younger sister. In interviews, she often mentioned having her mother at her QVC filmings and also getting tidbits about the mineral makeup trend from her brother, among other people.

But she rarely spoke about her sister, Colaine Roepke. In a piece she wrote for Oprah.com, Leslie wrote that she grew apart from Colaine when she was focusing on her career. The tipping point was one Christmas, when Colaine took one of their grandmother’s handmade decorations Sylvia had passed on to Leslie.

Leslie confronted her, and from then on, their relationship went cold. Even when they saw each other at family gatherings, they didn’t speak.

But when Leslie’s father-in-law passed away, she decided to bury the hatchet with her sister. They texted and went on a hike together. They have since restored their bond.

In a 2015 TEDx Talk, Blodgett and Roepke spoke about how they had fallen out before reconnecting after 10 years.