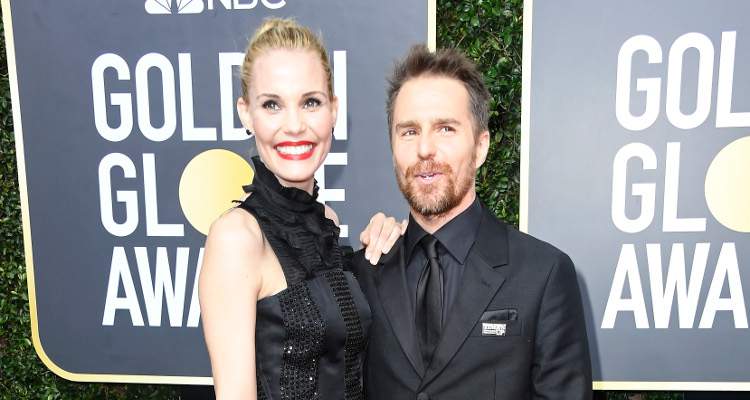 Last night’s Golden Globe Awards were everything to Sam Rockwell, as he finally took home the gold! It was the first Golden Globe win of his career and with the gorgeous Leslie Bibb by his side, Sam Rockwell couldn’t have looked happier. Just as his name was called to win “Best Supporting Actor,” he gave his date a big kiss, which caused her to frantically wipe her lipstick of his face before he went up on stage! It was every bit of adorable and people have not stopped gushing about her since! So, just who is Sam Rockwell’s girlfriend? It’s very possible you’ve seen Leslie Bibb before; we’ve got all you need to know about her here.

Sam Rockwell accepted his first Golden Globe Award for Three Billboards Outside Ebbing, Missouri with a funny and moving speech. And if he did it with his girlfriend Leslie Bibb’s lipstick all over his mouth, who are we to complain! She’s obviously proud of her longtime beau’s big win! He even gave her a nod in his long list of thank you’s, which is basically a Hollywood profession of love at its finest! It’s possible these two couldn’t get any cuter if they tried. That’s why we can’t help but gush over Sam Rockwell’s lovely lady, right here in our Leslie Bibb wiki. There’s so much more to learn about the lucky lady on Sam Rockwell’s arm, so keep reading!

A young Leslie Bibb went through several ups and downs in her childhood. Born in North Dakota, she grew up in an all-girls household in Virginia. Her father passed away when she was three, leaving her widowed mother to raise her and her three older sisters. Betty Blakemore Sulzbach, her mother, is a former director of Virginia’s Office of Consumer Affairs.

Though she was born in North Dakota, Bibb feels more at home in Virginia. “People come up to me and say, ‘You’re from Bismarck, N.D.?’ Even Josh Duhamel did that, and I say no,” she said. “I’ve got nothing against North Dakota—and sometimes I feel like I’m so rude about it—but I’m proud of being from Virginia.”

Bibb attended an all-girls high school. She most notably played popular mean girl characters in TV shows like Popular and GCB. But in reality, the 1991 graduate was far from popular.

baby roo in the ‘bu…yes, that is a baby kangaroo i am cradling while shooting at the beach…thank you #nobodies for proving to me that i do have maternal instincts…

While in high school, Bibb’s mom entered her in a nationwide modeling contest sponsored by The Oprah Winfrey Show and the Elite Agency. The celebrity judging panel that consisted of supermodels Naomi Campbell, Linda Evangelista, and Iman, as well as Elite founder, John Casablancas, chose Bibb as the winner.

After finishing her junior year, she flew to New York City to sign a modeling contract with Elite, right away. She jumped into the modeling world in the summer of 1990 and also worked in Japan.

She returned home to finish her senior year, and after graduating, she went to the University of Virginia “for a nanosecond.” Bibb dropped out of college after one semester and moved to New York, where she pursued modeling full-time. While appearing in magazines like Maxim and FHM, she also took acting lessons at the William Esper studio for three years.

me and baloo…italian hospitality…? cred & great morning courtesy of @martinoacampora…

A Big and Easy Beginning

It didn’t take long for the young model to switch gears to acting. She made small appearances in TV shows like Home Improvement and Pacific Blue before she got her big break in the second season of the TV adaptation of The Big Easy, when she replaced Susan Walters.

That led to more roles in Touch Me and The Space Between Us. Her first leading role was in the WB Network series, Popular, which won her a Teen Choice Award and several other recognizable roles. After starring alongside the late Paul Walker in the critically-panned thriller flick, The Skulls, she was cast as a regular on ER.

Due to her successful acting career, Leslie Bibb’s net worth is estimated to be $2.0 million. A snazzy spokesperson contract with Revlon and a nude spread in Allure magazine may have helped boost it. Sam Rockwell’s net worth, on the other hand, is estimated at $15.0 million.

In 2003, Bibb married Rob Born, an investment banker, in a destination wedding in Mexico. However, the couple got divorced a year later. But the actress was not one to shy away from love. She began dating Sam Rockwell in 2007 and made their relationship work, despite Rockwell’s busy schedule that kept them apart for weeks at a time.

Love blossomed when they crossed paths in the lobby of the Chateau Marmont Hotel in Los Angeles. Bibb was waiting to have dinner with her friends, while Rockwell was there filming Frost/Nixon.

“He smiled at me, and I thought, ‘Oh no, what’s that?’ Sometimes you just get struck,” Bibb confessed in an interview. Rockwell revealed they work on material together and the couple has shared screen-time in Iron Man 2. The Golden Globe winner played Justin Hammer in the Marvel universe, who bankrolls Tony Stark’s enemy’s murderous schemes.