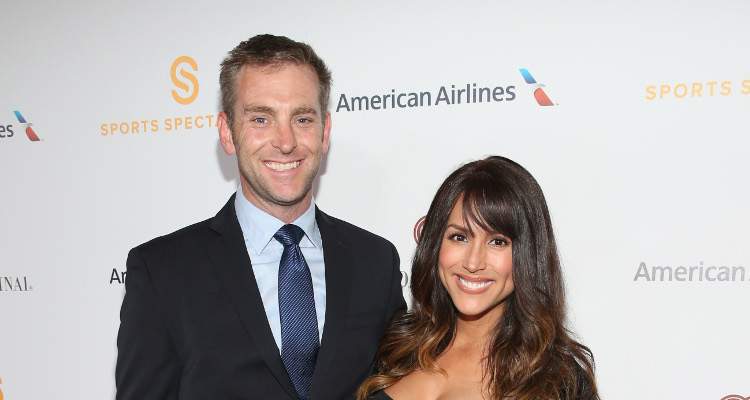 Chris Dougherty has stood by his wife, Leeann Tweeden and supported her as she accused Democratic Senator Al Franken of sexually harassing and groping her while on a USO trip to military personnel overseas. Dougherty is a veteran of war, and met Tweeden in the course of duty. He is educated and now works as a pilot for the California Air National Guard. He lives in Los Angles with his wife and two children.

Leeann Tweeden, a model, and sports commentator accused Democratic Senator Al Franken of “forcibly kissing” and groping her once while she was asleep. This incident reportedly happened while the two were on a visit overseas with the United States Organization to spend time with military personnel. Tweeden wrote about her experience, saying, “I felt disgusted and violated.” She also posted a photo of Franken groping her while she appears to be asleep on a plane. This has people wanting to know more about the radio personality and her family, especially Leeann Tweeden’s husband. Here are a few details from Chris Dougherty’s wiki.

It Pays to Be Friends

There is no information on Chris Dougherty’s age, but we know he met Tweeden when she was on a USO visit. Dougherty was serving as a military pilot and met his future wife through a mutual friend. Since 2002, Tweeden regularly went on USO tours where she met Tyler Thompson, the pilot of a C-130 plane she flew in on one of her numerous trips. They became friends and stayed in touch even after she returned to the U.S. In October 2004, she invited Thompson to join her and her friends in Virginia, and he asked if he could bring along a friend.

A Meeting of Two Hearts

The friend was Dougherty, but both he and Tweeden were involved with other people at the time. However, things changed a couple months later, and they started dating. On yet another trip for USO, Dougherty ended up piloting the plane in which  Tweeden was traveling on, and they started talking. Both were now single, and after returning to the U.S., they started dating. Several years later, the couple discovered that they really wanted to be with each other for the rest of their lives. They got married in a private ceremony on July 4, 2010. By all accounts, their marriage has been a happy union, and they now have two children. Chris Dougherty’s kids with Tweeden are four-year-old Kane and two-year-old Kaia.

According to his military profile, Dougherty is an educated man with an extensive military background. Before being deployed overseas, he graduated with a Bachelor’s degree in human factors engineering from the United States Air Force Academy in 1996. He obtained his Master’s degree in joint warfare from Embry-Riddle Aeronautical University in 2009, before topping it off with another Master’s in military arts and science from Air University in 2011. Dougherty is currently serving as a pilot for the California Air National Guard and lives with his wife and children in Los Angeles, California.

The Best Kind of Man

He still contributes to the armed forces through philanthropic activities. Both Dougherty and Tweeden support the Boot Campaign, which provides programs for veterans and military families across America. There is no information about Chris Dougherty’s net worth, but considering his bright and long career in the Air Force, it must be substantial. He has not yet spoken about his wife’s allegations against Senator Franken.