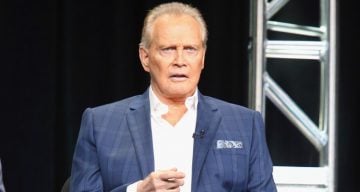 Lee Majors is best known for playing Colonel Steve Austin in the science fiction show The Six Million Dollar Man. His contribution to the entertainment industry made him famous, earning Lee Majors his net worth of an estimated $15.0 million. But where is Lee Majors today? Take a look at our Lee Majors wiki for everything you need to know!

Born Harvey Lee Yeary on April 23, 1939, in Wyandotte, Michigan, to Carl and Alice Yeary, Lee Majors’ age is 78. Both of his parents died in separate accidents. His father’s occurred before he was born, and his mother’s when Majors was one. At the age of two, he was adopted by his uncle and aunt and moved to Middlesboro, Kentucky.

While at Middlesboro High School, Majors was highly involved in sports, and played football as well as track. In 1957, he graduated with a high GPA, thereby earning a scholarship to Indiana University, where he joined the football team. Two years later, Majors transferred to Eastern Kentucky University.

In 1960, Majors played in his first football game. He severely injured his back and was left paralyzed for two weeks, ending his college football career. Once he recovered, Majors turned to acting. He took part in several plays at the Pioneer Playhouse in Danville, Kentucky. In 1962, he graduated from Kentucky University with a degree in physical education and history.

Majors moved to Los Angeles to further pursue his dream of becoming an actor. He worked at the Los Angeles Parks and Recreation Department as the North Hollywood Park Director. While living in L.A., Majors made many professional connections including James Dean’s agent, Dick Clayton, who suggested that Majors attend his acting school. After being there for a year, he took on the stage name Lee Majors, as a tribute to his childhood hero Johnny Majors, and Clayton felt like he was ready to begin his career.

Lee Majors’ Net Worth and Movies

Lee Majors landed his first role at the age of 25 in Strait-Jacket, where he played Joan Crawford’s ill-fated husband. Throughout his career, Majors appeared in several films and TV shows like Will Penny, The Ballad of Andy Crocker, The Norseman, Steel, Agency, Killer Fish, The Last Chase, Starflight: The Plane That Couldn’t Land, A Smoky Mountain Christmas, Scrooged, Trojan War, Primary Suspect, Big Fat Liar, Arizona Summer, Waitin’ to Live, and Ben 10: Race Against Time.

He is well-known for his roles in The Big Valley, The Six Million Dollar Man, and The Fall Guy. Lee Majors’ net worth is an estimated $15.0 million thanks to his brilliant work in movies and TV shows.

In 1961, while still at Eastern Kentucky, Majors married Kathy Robinson. A year later, their son Lee Majors Jr. was welcomed into the world. Soon after Majors and his family moved to Los Angeles, his smooth-sailing marriage encountered some trouble, and the couple got divorced in 1964, after which his ex-wife and son went back to Kentucky.

His second marriage was to the late Farrah Fawcett. They tied the knot in 1973 and were one of the best-known couples in Hollywood. However, their marriage came to an end in 1979, and their divorce was finalized in 1982.

Majors’ third marriage was to former Playboy model Karen Velez. They walked down the aisle in 1988 and have three kids together: A daughter, Nikki Loren, and twin boys Dane Luke and Trey Kulley. However, the couple got divorced in 1994 citing irreconcilable differences. In 2002, Majors married an actress and model Faith Cross, and they currently live in Houston, Texas.

Where Is Lee Majors Today?

Majors was last seen on season 2 of the TV show Ash vs. Evil Dead, which premiered in October 2016. Currently, there are no details about Majors’ upcoming projects. He was also seen in the TV movie Eat, Play, Love which premiered on August 19, 2017.