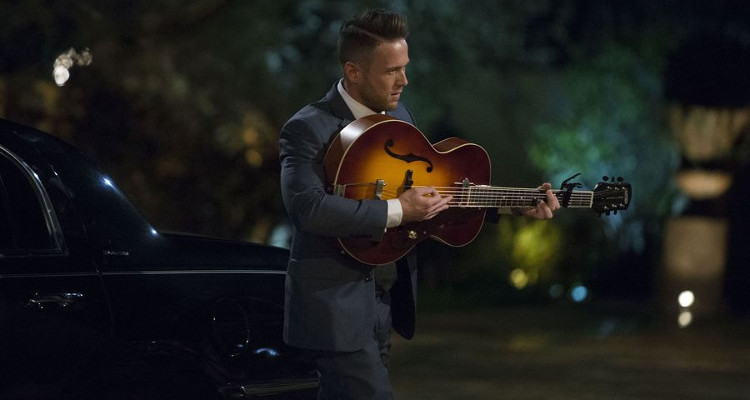 This week’s episode of The Bachelorette Season 13 reinforced why Lee Garrett was such a horrible casting choice. And that’s just the tip of the iceberg! Prior to The Bachelorette, Lee’s tweets have made him extremely unpopular.

The Bachelor franchise has given us some of the most entertaining villains in reality TV. Their antics might not make them win, but they usually last pretty long in the competition, and often become the characters fans love to hate. But this season of The Bachelorette has a villain that no one can stand. In fact, everyone is counting the days until he leaves! We’re talking about Lee Garrett from The Bachelorette. His social media activity is making Bachelor Nation question ABC on whether or not they check the backgrounds of the cast, or just cast them for the sake of drama. Either way, last night showed that Lee Garrett is definitely stirring something up in the Bachelor mansion.

The 30-year-old is a Florida native, who works in Nashville as a singer-songwriter. He’s an aspiring country musician with a back story. He released an EP called “Lyin’ Here” and is preparing for his debut album. Not to be confused with the classic American rhythm and blues artist of the same name, who co-wrote the ’70s smash hit, “Signed, Sealed, Delivered.” This Lee Garrett from The Bachelorette is currently working to build his career in music. Check out his MySpace page here! (Do people still use MySpace?!)

His LinkedIn also gives a laundry list of professional titles. According to Lee’s page, he’s “a Professional Actor/ Singer Songwriter/ Bartender/ Small Biz Owner.” He has performed at several venues in Nashville. In his ABC bio, when asked about what he does for fun in his city, he says “Music in Music City. I listen and I’ve played at just about every venue there!”

The contestants typically keep their social media accounts private until the show premieres. But the moment Lee set his Twitter and Instagram to public, he created a storm over his casting. His Instagram is your everyday country musician affair, complete with cowboys hats, and guitars. But his Twitter is a whole other story.

Lee’s Twitter history includes offensive tweets against Black Lives Matter, feminists, liberals, and how Nixon should be exonerated for committing obstruction of justice. Bachelor Nation is pretty furious that he has been cast on the first African-American Bachelorette’s season. Following the backlash, Lee has set his accounts to private, but some online users have saved images of his racist tweets.

ABC and Warner Bros. initially didn’t comment about whether or not they knew about his online history. If it’s true that he was cast just to create drama, Bachelor Nation feared he might return to the franchise’s other projects, like past contestants who bear villain tags. But Chris Harrison’s statement quelled those fears. He confirmed that they didn’t know about Lee’s offensive past and calls the incident “very unfortunate.”

For those asking, no, of course we didn't know about the offensive tweets from Lee's account. None of us were aware of them Very unfortunate

This season of The Bachelorette has mostly avoided broaching the topic of race. But with Lee in the house, it wasn’t long before the dreaded subplot emerged. Continuing from the previous episode, Lee continues to provoke Eric this week, and makes him look like the bad guy. But Eric declares in finality that he’s keeping his distance from Lee. Thank goodness for that!

Except that Lee moves on to his next target: Kenny the wrestler. He interrupts —or “re-interrupts” in Corinne terms— him during his one-on-one with Rachel. On top of that, he actually counts down when Kenny asks for 16 (actually 60) seconds alone with Rachel.

Later, Kenny asks for a chat with Lee—which is the most painful part of the evening. Kenny starts of by accusing Lee of taking advantage of their friendship to get more time with Rachel. Bachelor Nation doesn’t really see how Kenny thought they were friends, when clearly Lee is only trying to get a rise out of the wrestler. The talk ends with the guys thinking they resolved their differences, but really they didn’t.

Poor Rachel is in tears because at the end of the day, she has to deal with the pressure of being the first Black Bachelorette and Peter told her, “You’re not alone.” Tired from the drama of the evening, she hands out roses, shockingly handing Lee the last rose. Meanwhile, Dean becomes a hero for Bachelor Nation when he tells a producer about Lee’s “intolerance.”

At Hilton Head island, it’s Lee vs. Kenny Round 2. This time, Lee starts playing informant and says that Kenny’s “aggressive” side came out and he “berated” him for no reason. Rachel sits down with Kenny to hear his side of the story. Kenny doesn’t think he was being aggressive and says that Lee is disingenuous and untruthful. Unfortunately, Kenny feels that Rachel is in Lee’s corner and starts to get in his own head as his temper flares.

He calls Lee out for another chat and that’s where the show ends. You know how the show loves its cliffhangers! Find out where the Lee and Kenny drama head to next week on The Bachelorette at 8 p.m. EST on ABC.

We weren't lying when we said it'd be a dramatic season. #TheBachelorette pic.twitter.com/hKD8otFkLv