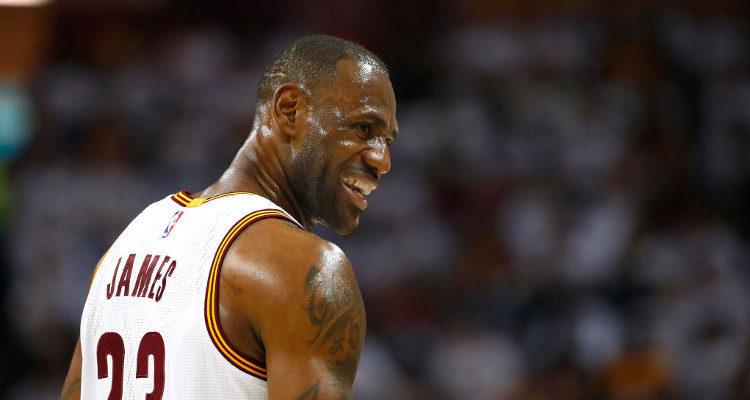 Cleveland Cavaliers star player, Lebron James fought to stay focused during Game 1 of the NBA finals, after it was discovered his home was vandalized. The day before the Cavaliers faced off against the Warriors, James’ LA home was vandalized with a racial slur spray-painted onto his front gate! He says that he is glad that his wife and three kids were safe back in Ohio when it occurred. “No matter how much money you have, no matter how famous you are, no matter how many people admire you, being black in America is tough,” said James. To know more about the terrific player, read our LeBron James wiki.

LeBron James married his high school sweetheart, Savannah Brinson on September 14, 2013, in a colorful San Diego ceremony. The couple lives in Los Angeles with their three children; two sons and one daughter.

LeBron James was raised by his 16-year-old mother, Gloria Marie James. Finding work was difficult for the young mother, so the two often moved around. When Frank Walker, a local youth football coach, offered his home to LeBron James, Gloria let her son live with Walker and his family. Walker introduced James to basketball when he was nine years old, and the budding player went on to play in the Amateur Athletic Union (AAU) for the Northeast Ohio Shooting Stars.

After showing potential at AAU, James went on to attend St. Vincent-St. Mary High School. In his freshman year, he averaged 21 points and 6 rebounds per game for the school’s varsity basketball team. As a sophomore, he averaged 25.2 points and 7.2 rebounds with 5.8 assists and 3.8 steals per game.

In his junior year, James appeared in SLAM Magazine and was lauded as possibly “the best high school basketball player in America right now.”

LeBron James also played wide receiver for St. Vincent-St. Mary’s football team and was recruited by some Division I programs, including Notre Dame. As a sophomore, he was named first team all-state. His football career came to an end before his senior year, after he broke his wrist during an AAU game.

Standing tall at 6’8″, Lebron James started his professional career with the Cleveland Cavaliers in 2003. He was the first overall pick of the 2003 NBA draft. James proved to be an unstoppable player right from the beginning.

In 2004, he earned his first NBA All-Star Game selection, contributing 13 points, 8 rebounds, and 6 assists in a winning effort for the Eastern Conference. The Ohio native’s rapid development as a great player amazed the basketball world. At the 2006 All-Star Game, James led the team to victory with 29 points and was named the NBA All-Star Game Most Valuable Player. In 2007, he led Cleveland to the NBA Finals.

In 2010, he left the Cavaliers for the Miami Heat in a highly publicized move. James spent four seasons with the Heat, leading them to the Finals every year, and winning back-to-back championships in 2012 and 2013. In 2013, he led Miami on a 27-game winning streak, the third longest in league history.

Lebron James’ net worth is estimated to be $340.0 million, with a yearly salary of $70.0 million. His lucrative NBA career combined with endorsements earned him slightly over $500.0 million (before taxes and expenses).

LeBron James has a small stake in Beats by Dre, which earned him a $30.0 million payout after Apple bought the company for $3.0 billion.

He signed his first Nike endorsement when he was just 18! The deal paid $90.0 million over seven years, making him $12.8 million a year. Today he earns $20.0 million per year from Nike in the form of salary and royalty payments for his signature shoe line.

After joining the Miami Heat, Lebron James took on an almost villainous attitude, which did not go well with fans. He was heckled by Cavaliers supporters and, after constantly being labeled as the bad guy, he decided to buy into it. “I started to play the game of basketball at a level, or at a mind state that I’ve never played at before … meaning, angry,” said James.

With time, James reconnected with his love for the game and created a strong public image for himself. He became the third man to ever appear on the cover of Vogue magazine, and has a production company called SpringHill Entertainment.