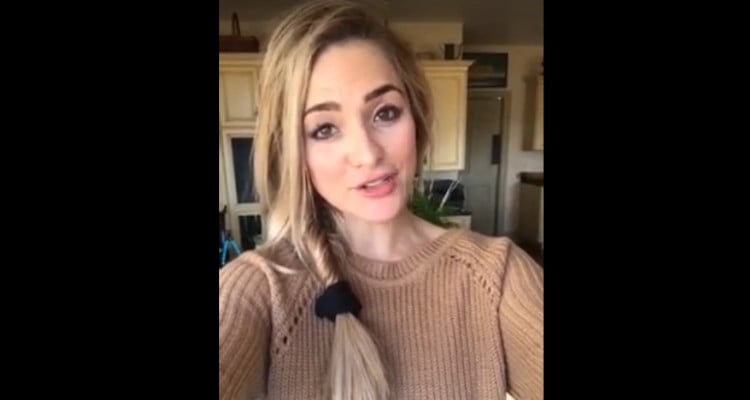 As if the current Bachelor in Paradise 2017 controversy wasn’t enough, a new one has erupted in the franchise. Former Bachelor contestant Leah Block has made some controversial comments about The Bachelorette 2017 on Twitter, which she later deleted. However, it drew a sharp response from Rachel Lindsay, who suggested that Block should meet up with Lee Garrett, who has been caught making similar remarks about race and people of color. Lindsay’s stinging response seems to have struck a chord with people.

It’s literally a war of words out there between Leah Block and The Bachelorette 2017, Rachel Lindsay. Block was on The Bachelor as a contestant on Season 20 with Ben Higgins and later on Bachelor in Paradise, where she tried to get Nick Viall’s attention before leaving the show. Block made some comments on Twitter about The Bachelorette 2017, which many people are saying had clear racist undertones. Lindsay is one of them, and she retorted with her own tweet calling out Block for making such objectionable comments. This exchange of words has got people’s attention, and they want to know more about Block. Keep reading for some details from Leah Block’s wiki.

Leah Block’s age is 26, and she hails from Denver, Colorado. She graduated from Cherry Creek High School before completing her Bachelor of Applied Science degree from Colorado State University in 2008. She then completed a course in Apparel Merchandising from 2009 to 2012. Block worked as an event coordinator for The Bastian Group Inc. She loves tattoos and has two doves inked on the back of her calves. Block says that her favorite music is pretty much anything that has a good beat and lyrics to it, and is something she can cycle to. She loves watching movies, and some of her favorites are Bridesmaids, Interstellar, and The Dark Knight.

A Believer in Marriage

Block feels there is nothing like the sun and prefers to be in the sun rather than the cold simply because, “I hate the feeling of being cold.” Before her reality TV debut, she revealed that the most outrageous thing she has ever done is “probably twerking on the wall in my dress during The Bachelor interview.” If she could be any fictional character, she would like to be a mermaid. Her views on marriage are a bit old-fashioned as Block says, “Marriage means doing whatever it takes to keep the relationship alive. Being able to change and grow together and stay in love through thick and thin.” She thinks there is somebody special out there for her and hopes to meet him soon, saying, “I want to share my life with someone and enjoy everything the world has to offer together.”

Three things on her bucket list are to go and explore Greece, fly in a helicopter, and skydive. However, she is currently in the middle of a raging controversy that refuses to die down. On Leah Block’s Twitter account, there was a reference to the show Love & Hip Hop, and she seemed to suggest that The Bachelorette 2017 was primarily a show of and for African-American people. The tweet was flippant and hurtful according to many people, who later responded to her. In reply to Leah Block’s now deleted tweet, Rachel Lindsay wrote that Block should meet up with Lee Garrett, who often makes outrageous and controversial comments about race and people of color, which has led many people to label him a blatant racist. Lindsay was clearly upset about the remark and made a strong retort suggesting that Block and Garrett would find many things in common, especially their attitude towards black people.

People who are searching for Leah Block’s hot pics can try looking for them on the Internet. Leah Block’s Instagram account is currently private, so you cannot access her pics there, and her Twitter page has since been deleted. It is a tough situation to come back from, and there has been no further comment made from Block at this time. After all the fun and excitement that viewers have seen on The Bachelorette 2017, the last thing they want is this sort of needless controversy!