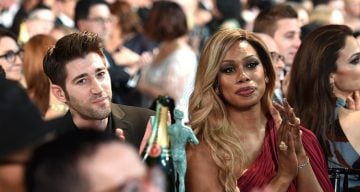 Laverne Cox is a successful actress with a lot of social work to her name. She carved a path for herself against all odds and is now a face of the transgender community. So, the burning question is: Who is Laverne Cox dating? Read on to find out all about the Hollywood director and filmmaker who is Laverne Cox’s boyfriend.

Laverne Cox is a transgender activist, and the things she has done for the community are worthy of praise and appreciation. She has been tackling the problems that the LGBTQ community face and makes sure she educates everyone about supporting them. We totally agree with Laverne Cox’s #TransIsBeautiful movement, and love that she is bringing awareness about equality. Cox looks like she is in a great place in life, and even has a man at her side to celebrate her success. Jono Freedrix is Laverne Cox’s boyfriend, and the couple are often seen together at events, red carpets, and award ceremonies. Take a look at who the handsome man is in our Jono Freedrix wiki.

Freedrix was a High School Teacher Before Entering Hollywood

Jono Freedrix was born on April 6, 1978 in Vancouver, Canada, making his age 39. Freedrix went to Simon Fraser University in British Columbia and graduated in 2010 with a Masters of Education. According to IMDb, Freedrix was a high school teacher who also headed a teen student film-making program, Killarney Films, which won a couple of awards. He is a Brooklyn-based director, writer, and editor, best known for stories with some hard hitting truths. He bases his movies on reality, but adds a comedic twist to them.

His website boasts that Freedrix has a slight obsession with orangutans, after spending time in the Borneo jungles. It’s good to see a bright side to the pretty dark writer!

Though not much is known about Freedrix’s family or his life before filmmaking, his Instagram posts tell us some details about his personal life, like how he has a sister named Ellen Friedrichs, and his mother passed away in 2014.

The Virtual Stage is a film and theater company based in Vancouver, Canada, and its president is Jono Freedrix. The company has won many awards for the films produced there and has recently put forth The Fluid Trilogy, which is a twisted dark comedy about women’s bodily fluids. The trilogy contains three short films: Bloody Mary, Sucklepump, and Bun in the Oven.

The movies are making their rounds at many film festivals, and in 2016 Sucklepump won an award at the NYC Downtown Short Film Festival for Best Comedy.

Freedrix is a pretty spirited man, or so it seems, with unusual creativity. His Instagram posts are all about his movie-making, and of course, Laverne Cox! Check out some of Jono Freedrix’s Insta posts below!

Laverne All the Way!

Who Say’s Girls Have All the Fun?

He Looks Pretty Smitten with Laverne!

Halloween is Incomplete without Bloody Tears!