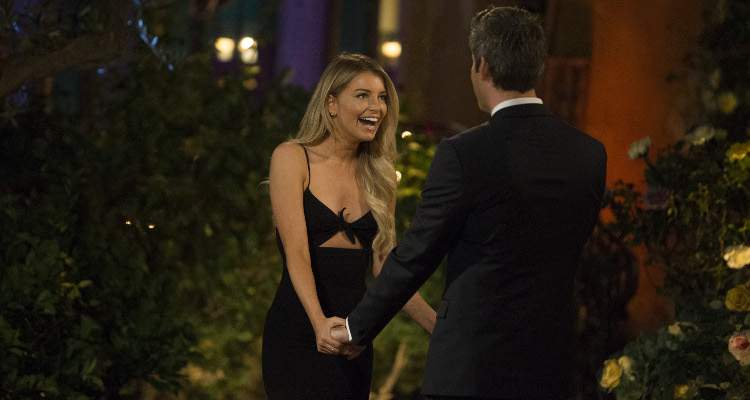 The Bachelor season 22 began with four Laurens in the mansion, but Arie whittled it down to two by Week 2. In Week 3, did Lauren Schleyer finally catch Arie’s eye? We’ve got spoilers from The Bachelor right here.

Week 3 into The Bachelor and the show has got the girls fighting over Arie, like literally, in a wrestling ring. All in all, #BestDateEver on the show! You know who won’t be using that hashtag anytime soon? You might think Bibiana, but that honor actually goes to Lauren Schleyer this week. She was one of the two remaining Laurens after Arie cut down the number by half. She got the one-on-one date, but not all dates go as planned. Get the scoop on Lauren’s Bachelor date here.

The Struggle Is Real

Lauren S. and Lauren B. are the only two remaining Laurens left in the competition as of Week 3, and they are so far at the back of the pack. While we’re still waiting on Lauren B to have her moment, Lauren S. finally gets her one-on-one date with Arie.

We could really feel her excitement and, might we add, she looked fabulous in that red dress. Bachelor Nation is hitting her up on Twitter and Instagram to find out where she got that amazing number. She matches the red carpet rolled out for her so she can strut to the private jet like the star she is.

This time Arie (read: The Bachelor producers) takes her on a date to Napa for wine tasting, perhaps a dream date for many. They drink wine, as is Bachelor date norm, walk through the vineyards, and talk about things like their morning routine. Pretty sweet and normal for a date in this franchise.

Come evening, things go south. They go for a candlelit dinner, and this is usually the part where one of them brings out a sad story and Bachelor Nation collectively sobs, and then decides to root for the girl. Remember how Raven won over Bachelor Nation last season with her story about how she beat up a cheating ex with a stiletto? Or Becca K opening up about the loss of her dad last week? You get the gist.

But no emotional story for Lauren. Nope! Lauren, whose excitement about getting this date is imaginable, talks, and talks, and talks about random things and mostly about herself. Who knew she could hold a one-sided conversation so well! Arie doesn’t get a word in edgewise during the entire date, and that makes things really awkward to watch.

In fact, Arie is so bored, he is actually seen eating, ON CAMERA! For all the editing the show does to these dates, they actually left the bit of Arie eating. For the uninitiated, the franchise doesn’t encourage eating the delicious food served during the dates. Contestants and the Bachelor/Bachelorette eat before the date so they can focus on talking to each other on camera more.

Roses are red and so is my purse. That’s all I got, but hey it’s Bachelor Monday! Who’s watching? ?

Bachelor Nation didn’t see Arie eating on TV as a good sign. It was obvious he couldn’t connect with her, as he put it, “I really wanted this for us … But, I don’t even know.” He did say, and we’ll all agree, Lauren is “amazing.” But this date was too awkward to continue.

So Arie dumped her at the end of the date and sent her home. You know the date was really bad because rarely does a contestant get sent home after a one-on-one date. Lauren was obviously heartbroken and shed a few tears. Bachelor Nation is also shaken up over the date because Lauren was definitely a fan-favorite if not a clear frontrunner.

We’re going to miss Lauren and her charm, but we’re not complaining about having only one Lauren to keep track of now. You can still catch up with her on her Instagram campaigning to join Taylor Swift’s squad.

Probably telling @ariejr how I would “literally be anyone in Taylor Swift’s girl squad.” Tune in tonight for the premiere of #TheBachelor at 8/7c! @bachelorabc