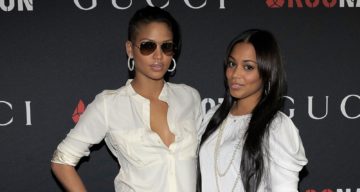 After rapper Nipsey Hussle was killed in a shooting on March 31, 2019, prayers and support poured in for his girlfriend, Lauren London, and their children. Among the many heartfelt prayers sent her way was one from London’s longtime best friend, Cassie Ventura. Much speculation has surrounded London and Ventura’s relationship over the years. Now many are wondering if Lauren London and Cassie Ventura are sisters. But that’s a slim possibility.

Are Cassie and Lauren London Related?

Singer and actress Cassie Ventura, known for her role in Step Up 2: The Streets, is also famous as the ex-girlfriend of Sean “Diddy” Combs. Her friendship with Lauren London goes back several years. They even worked on the 2016 movie The Perfect Match together.

Their friendship is so tight that at one point, Cassie and London were rumored to be a couple. Cassie reportedly is also the godmother of London and Nipsey Hussle’s son, Kross.

Cassie is, of course, giving her friend love and support after Nipsey Hussle’s tragic death. London recently broke her silence on Instagram after Hussle’s death, saying she felt “lost.” Cassie was among the many celebrities sending her support in the comments.

Cassie later posted a heartfelt tribute on her Instagram on April 4. Alongside pictures of London and Hussle, the songstress wrote: “Thank you for loving my sister the way you did.”

Thank you for loving my sister the way you did. Thankful that I was able to witness that legendary love. Thank you for taking care of her. Thank you for giving her the most beautiful son. We will always see you. I know that you will continue to protect her and love her unconditionally. We will never be you, but I can promise we will ALWAYS be here for her. Always & Forever. I love you @laurenlondon, praying for you, the babies and your family. Thank you, Nip ♥️ Rest in Love 🙏🏽

Comments on the post thanked Cassie for her beautiful words to Hussle and for being a supportive friend to London. But outside the grief, curious Internet users are wondering if Cassie and London are sisters.

They do have a passing resemblance, and some believe they have different last names because they are allegedly half-sisters.

However, Cassie Ventura and Lauren London don’t have any familial connection between them. They are sisters by bond, and not by blood.

Cassie Ventura was born on August 26, 1986 in New London, Connecticut. Her father is Filipino, whereas her mother has African-American, Mexican, and West Indian ancestry.

After graduating from high school in Connecticut, Cassie moved to New York to pursue her entertainment career. There, she took modeling jobs and classes at the Broadway Dance Center while trying to break into the music industry.

In August 2006, she released her eponymous debut album, which featured the hit lead single, “Me & U.” Following her successful foray into music, she made her film debut in Step Up 2: The Streets in 2008.

That same year, she released the song “Official Girl” featuring Lil Wayne, who is the father of London’s eldest child, Cameron. In 2009, she collaborated with her then-boyfriend, Diddy, for a song titled “Must Be Love.”

Ventura and Diddy would break up in 2018, after almost 10 years together. She went Instagram official with her new man, personal trainer Alex Fine, in December 2018.

Lauren London’s Family Is from California

Los Angeles native Lauren London was born on December 5, 1984. Her father is Jewish and her mother is African-American.

There’s no evidence to suggest their parents have children from other relationships, which might indicate that Cassie and London are half-sisters. Cassie reportedly has a full sibling named Rod Ventura, while there’s no confirmation of any siblings for London.

Lauren London and Cassie Ventura are best friends and as close as sisters, as is clear by Cassie being there for her friend during this difficult time.