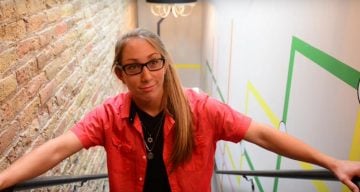 Who said you could only find love on The Bachelor franchise? Two of The Challenge contestants met each other on the Invasion of the Champions season, had a great connection, and decided to give it a shot outside of the show. However, their oh-so-romantic love story came to an end after several months for some reason.

We are talking about Laurel Stucky and Nicole Zanatta, who once upon a time gave us major relationship goals. So, why did Laurel and Nicole break up?

Before we head straight to their breakup story, let’s first find out what happened on the last episode of The Challenge: Vendettas, where Nicole came face-to-face with Laurel.

During the ring challenge, four Challenge champs, known as Mercenaries returned to take on the four competitors. It was Ashley, Frank, Darrell, and Nicole’s ex-girlfriend, Laurel.

Nicole was safe from the elimination round. But the moment she saw Laurel, Nicole broke down in tears.

“What a great birthday gift — surprise, surprise, Laurel’s here. Just to see her kind of makes my stomach drop…obviously [she] still has my heart a little bit,” Nicole said.

Although Nicole was heartbroken, Laurel appeared unfazed by reunion with her ex. Laurel concentrated on her task and ended up defeating her opponent.

Laurel said, “Do I want to see her hurt? No. Has she hurt me multiple times? Yes, continuously, but I’m trying not to pay attention to her because, you know, elimination rounds are not about f**king emotions, right? So f**k that.”

Also Read: “The Challenge: Vendettas” Spoilers: A Betrayal Leads to an Elimination

How Did Laurel and Nicole Meet?

The estranged couple met each other while filming season 29 of The Challenge: Invasion of the Champions. They started dropping hints about their potential relationship before the show aired in February 2017.

On the show, they had undeniable chemistry as Nicole ended up pursuing Laurel, who had never dated a woman before. After the filming, the pair decided to continue their long-distance relationship for the next nine months.

Nicole was busy with her firefighting career in New York, and Laurel was in Montana. Laurel even gushed about Nicole and said that she makes her feel secure.

Also Read: “The Challenge: Vendettas” Spoilers: The Tables Have Turned Against Johnny Bananas!

All Good Things Come to an End

Although they did look very happy together and even celebrated their six-month anniversary, sadly Laurel and Nicole decided to split.

In August 2017, Nicole posted a photo with Laurel sitting on a bench. The post’s caption hinted about the breakup.

Some things aren't meant to last forever, they're just there for that time. So let it be and move on, learn and grow from it. Every new relationship teaches you something take the positives with the negatives and use it as you please. ?

Also Read: ”The Challenge: Vendettas” Spoilers: Who Was Eliminated in Episode 9?

No reason or cause of their breakup was ever mentioned. But, fans of the couple were definitely heartbroken to hear the news.

With Laurel recently showing up on The Challenge: Vendettas, maybe there is a hope that they will decide to rekindle their relationship and give it another try? Do you think Nicole and Laurel should sort things out and patch things up or they should move on for good?

Give us your opinion in the comments section below. Also, don’t forget to watch another fun-filled episode of The Challenge: Vendettas next Tuesday.