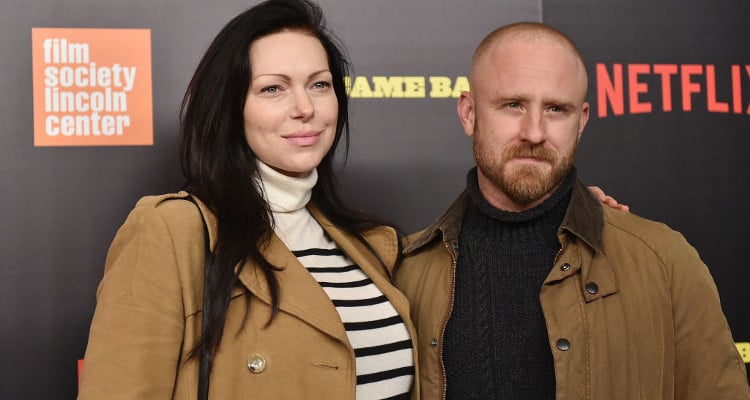 Those who are asking if Laura Prepon is pregnant need to step out of the rock they’re living under. She hasn’t eaten one too many cheeseburgers! Prepon is glowing with her pregnancy.

Laura Prepon stepped out for the premiere of her new movie, The Hero and she looks about ready to pop! The actress wrapped up filming for Orange is the New Black and is preparing for her growing family. Is Laura Prepon married? Technically, not really. Laura Prepon does not have a husband yet but she’s on her way to the altar. Find out about her relationship history, right here.

Laura Prepon was dating Christopher Masterson, who played the oldest brother, Francis, in Malcolm in the Middle. He is also the elder brother of Danny Masterson, Prepon’s That ‘70s Show co-star. Masterson was how Prepon got into Scientology.

She later dated former Greek star, Scott Michael Foster. They were together for nearly five years before they broke up, with rumors circulating that she was apparently not ready to jump into the dating pool again. In interviews, she had an indifferent attitude when asked about her dating life. But then she began dating Ben Foster. Yes, X-Men’s Angel, Ben Foster.

Prepon and Foster were spotted together on the 4th of July weekend in 2016, raising dating speculations. Foster was freshly single after his engagement to Robin Wright from House of Cards ended. He had an on-again off-again relationship with Wright who is 15 years older than him, but they had called off their engagement twice.

The couple came arm-in-arm to the premiere of The Girl on the Train, with Prepon wearing some sparkle on that all-important finger. A source later confirmed that they are engaged. The low-key couple is so private, even Prepon’s co-star and friend, Ashton Kutcher didn’t know about it!

When we were expecting to hear wedding news, the couple announced in January they are expecting their first child together! Laura Prepon appeared on Live with Kelly and Ryan last week, where she revealed that it’s a girl.

“It’s kind of weird because it sneaks up on you, you’re like, ‘I can’t believe it’s been eight months already!’ And you’re like, ‘Oh my gosh, she needs to come out already!'” Prepon said. “But it’s so wonderful, it’s such a blessing. She likes it here, she’s already kicking.”

It was on the same show, while he was Ripa’s guest co-host, that Ashton Kutcher ranted about not knowing Prepon got engaged. “I’m very upset with her right now. She just announced this engagement, and I had to find out in the news! She’s my friend. It’s weird like that,” Kutcher said. “By the way, it’s not just a random engagement. It’s an engagement to another friend of mine! So, now I’m double upset that neither of them told me. I got off the plane in New York like, ‘What?'” He also confirmed that Prepon and Foster had been friends for nearly 20 years. But the two co-stars patched things up.

When it was brought up again last week, Prepon told Ripa and Ryan Seacrest that she and her fiancé are very private people. She added that she hadn’t even told her mother that she was pregnant before photographs of her tiny bump made the rounds.

About last night! @theheromovie NYC. I hope you guys like this special movie! thank you for my glam: @tinaturnbowmup @josueperezhair and styling: @hellinkay ???