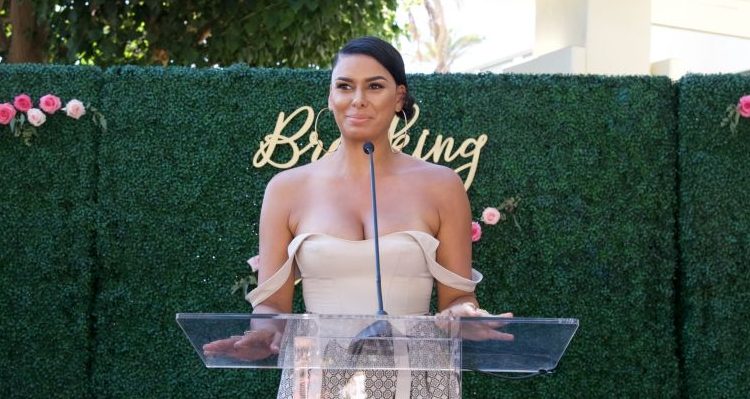 Rumors are doing the rounds that reality star Laura Govan is the girlfriend of music producer Vincent Herbert and pregnant with his baby. However, these reports have not yet been confirmed, and Govan herself has not spoken about it. Govan was earlier involved in a stormy relationship with ex-basketball player Gilbert Arenas, and it was all over the media thanks to the couple’s numerous fights.

If Vincent Herbert’s estranged wife, Tamar Braxton, is to be believed, Herbert is involved with his new girlfriend and is about to become a father to their on-the-way new baby. And now, many fans are wondering who his mysterious baby mama is.

According to sources, Vincent Herbert’s girlfriend is none other than reality television star Laura Govan. However, this news is not yet confirmed because neither Herbert nor Govan has spoken about their alleged relationship. However, fans are curious to know more about her, so we bring you some details from Laura Govan’s wiki.

Govan was never the wife of NBA All-Star Gilbert Arenas. The couple lived together for a long while before going their separate ways.

Gilbert Arenas is a former American professional basketball player who has played for the Golden State Warriors in the NBA. He has also played for other professional teams like the Washington Wizards, Orlando Magic, Memphis Grizzlies, and Shanghai Sharks before retiring in 2013.

Govan has four kids with Arenas and first met him while he was playing for the Warriors. At that time, Govan was working in the public relations department for the Sacramento Kings.

A Stormy and Volatile Relationship

Govan’s relationship with Arenas was volatile and generated a lot of press. In fact, The Washington Post wrote about their relationship and termed it as “a famously stormy one” with “breakups interspersed with reunions.”

Their discord led to extreme ends, with Govan once serving Arenas with child support and custody documents during the half-time break of a basketball game.

Laura Govan has appeared on the television series, Basketball Wives, which led Arenas to sue her and the show’s producers for “trademark infringement, false advertising, and misappropriation of the star’s likeness.” Arenas later dropped the lawsuit in 2012.

Govan said about their volatile relationship, “People say he’s a mess, and I’m a mess. You know what, we’re each other’s messes. Everybody has breakup and make-up moments. It just so happens that ours is out in the public. You learn to grow.”

Laura Govan was a basketball player herself during her younger years and was a star player for New Mexico State University, where she was enrolled. She later received an offer from Santa Carla University to become the head coach of their women’s basketball team. But, she declined as she was pregnant with Arenas’ baby.

With a height of six feet and three inches, Govan is a very tall woman and is of mixed heritage. She has African-American, Mexican, and Hawaiian roots that account for her special charm and allure.

Govan has appeared on TV shows like Basketball Wives: LA and I Dream of Nene: The Wedding. She also tries to help women who are struggling with their weight by making home-based workout videos, which give effective tips to obtain the desired figure.

#ad Making The Most Of Everyday & @flattummyco is Helpin Me Do It ! ?? There’s Nothing Worse Than Feeling Bloated and Like U Can’t Get Out Of Bed & Get Ur Day Going…. Flat Tummy Tea  Gets Rid Of All Of That, So I Can Focus On Getting Where I Want To Be. The Results Are Always Great, But This Round Has Been The Best So Far, Just LOOK At My Tummy – It’s Got Me Feelin’ Pretty Freaking Fit! Look Good & Feel Better, It Starts At flattummyco.com For Me – Check It Out

Govan has a complicated relationship with her sibling. Laura Govan’s sister is named Gloria Govan.

There are rumors that Gloria Govan slept with Arenas behind her sister’s back and it upset her greatly.

Laura Govan said about her sister, “I’m pretty cordial. Especially when it comes to business. If there is something going on and we have to be in the same room, I’m pretty cool. I’m not extra. I don’t hate her. I’ve forgiven her. I don’t trust her.”

Those who want to check out some sexy pictures of Govan should head over to her Instagram account. Laura Govan’s Instagram account is full of photos of Govan wearing fashionable and revealing dresses, spending time with her kids and friends, and of basketball games in action.

Even though Govan has tried hard all her life to avoid publicity in her personal life, the spotlight seems to follow her. And now, rumors are doing the rounds that Govan is pregnant with music producer Vincent Herbert’s love child, although this news is not yet confirmed.

However, it is the perfect time for Laura Govan to speak out and clear the air for once and for all.