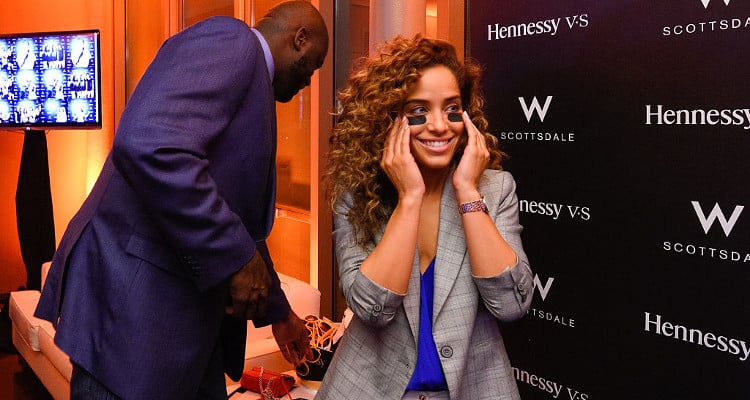 Shaq turns 45 today! Shaquille O’Neal had a little bit of bad publicity after a public feud with NBA player, JaVale McGee and then an on-air spat with Charles Barkley. He also pulled out of his scheduled Wrestlemania appearance, citing weight issues. But he’s sure to have a great scandal-free birthday! How are we so sure? It’s because he will most likely celebrate with his family and girlfriend. Who is this woman Shaquille O’Neal is dating? Her nam is Laticia Rolle and she has been by Shaq’s side for quite some time now, so we know you want to know more about her. Here are a few facts about Shaq’s girlfriend, including her net worth, family, and age in our Laticia Rolle wiki.

#1. She is an Entrepreneur and Runs a Blog

Rolle is one of five siblings born to Nancy and Alvarez Rolle. She has two sisters, Gisemi and D’Ana and two brothers, Xavier and Elijah. She graduated from Eckerd University with a degree in business management and communication. She hoped to own a restaurant and eventually become a CEO after she graduated. The 28-year-old hasn’t started her own business yet, but her career goals are still on the table.

She and her sister, D’Ana Rolle have launched their own lifestyle blog called Bluhazl.com. Laticia is the “Blu” and D’ana is the “Hazl.” The blog offers tips on makeup, diet, fashion, and exercise.

Rolle’s net worth isn’t known yet, so we can’t compare it to Shaq’s net worth of a whopping $350.0 million. He may have retired, but he remains the highest-paid player of all time. He also encourages his girlfriend’s dream to climb up the corporate ladder. He even promotes her blog on his Twitter!

Get your very own personal stylist from @stitchfix. Transition your wardrobe from winter to spring with @BluHazl, https://t.co/fbRuA0CTrI

O’Neal towers over this 5’6″ beauty with his 7′ frame, but she’s also a basketball powerhouse. According to her player profile on Eckerd University’s web site, Rolle played as a guard for their women’s basketball team. She sees her defensive intensity as her strength on the court. In her junior year, she played in 15 games but missed the rest of the season due to an injury.

She also played basketball in high school at the Worcester Academy in Gardner, Massachusetts, for Coach Sherry Lewis. Rolle was also named Most Valuable Player for her team as a senior.

i am the big sister, which makes me the boss ➖as told by the big sister. bossy meaning passionate, punctual, and maybe a little crazy. the journey of sisterhood, the sweetest roller coaster of love ❤️ where are my sisters that can relate?! xo, blu 🙊💥 #sisters #sisterhood #ootd #ootn #wiw #revolve #fblogger #atlantablogger #lifestyle #style #bluhazl

Shaq has a daughter, Taahirah from a previous relationship. He was married to Shaunie Nelson from 2002 to 2009. The couple has two sons, Shareef and Shaqir and two daughters, Amirah and Me’arah. After his divorce, he dated reality star, Nicole “Hoopz” Alexander in 2010. After their relationship ended, Shaq was spotted with his new flame, Laticia Rolle, in 2014.

Back then, Shaq and Rolle were seen partying it up at a club in Atlanta on the former NBA superstar’s birthday. A source had revealed that they were getting very cozy that night, with Rolle sitting on Shaq’s lap while they were at the party. There are even reports that O’Neal is ready to tie the knot for the second time and that the two are currently engaged. But the news remains unconfirmed at this point.

Running a lifestyle blog and dating one of the most legendary NBA players has its perks. Rolle has over 18,000 followers on her personal Instagram account and over 15,000 on Bluehazl’s Instagram account. Sure, it’s not much compared to her boyfriend’s over four million Instagram followers, but it’s still a lot more followers than us regular folks!

Rolle has been seen modeling for a few creations, promoted by Bluhazl in some of her posts. A few have Shaq’s girlfriend showing off her stunning self on vacation wearing swimwear. She also displays her love for her man in a few swoon-worthy posts.