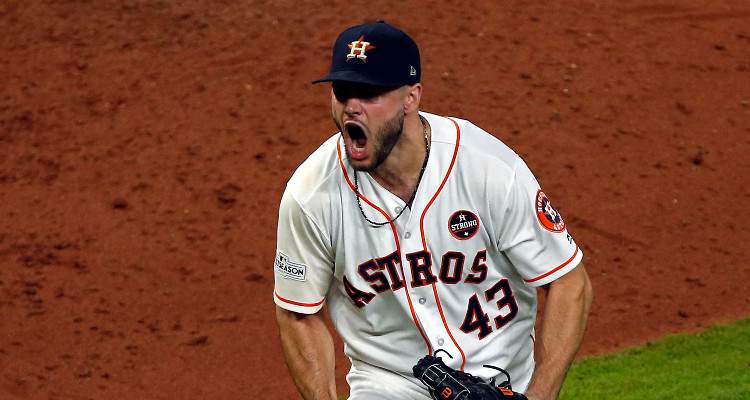 The Huston Astros plowed through the World Series, and with their grit and confidence, secured their first ever World Series win! In other news, the Astros’ Lance McCullers Jr. was in the spotlight not for his game, but his peculiar mound-digging after a mishap. Read all about the funny incident right here.

Why was Lance McCullers Jr. digging around in the dirt? Well if you know McCullers Jr., then you know that he wears a black diamond necklace for his games. During game 4 of the World Series, the Astros’ pitcher had a lot to worry about, and that’s keeping the game aside. While he was pitching, his infamous 40-karat black diamond necklace broke, littering the mound with diamonds.

Diamonds Can Be a Man’s Best Friend Too

The diamond-scooping drama happened just as everyone was waiting for Aaron Judge’s crucial second base review decision. The umpires even got in on the dirty action. And later, a boy was even seen with a plastic cup scooping dirt and sifting for the diamonds.

After the 24-year-old bent over the mound looking for the precious stones and gathered what he could, he pitched 2 1/3 innings, giving Aaron Judge just a single home run in the seventh inning.

Congrats to #Tampa native, #LanceMcCullersJr for being a stud on the mound and helping the #HoustonAstros reach the #WorldSeries! Real cool, humble dude and a BEAST on the mound! ??? @lancemccullers43 #CitrusParkLittleLeague #JesuitHighSchool

Lance McCullers Jr. somehow knew that he would be needed for Game 7, and although the Houston Astros manager had not declared the game’s starter until the end of Game 6, McCullers Jr. knew he would get it.

“I knew it was a possibility coming into the series, A.J. scheduled me for [Game] 3 coming in for a reason,” said McCullers Jr. “This Series was destined to go seven pretty much the whole time.”

It was a major moment for fans and players alike when the Houston Astros won the World Series. And Astros N0. 43 played a major part in the win.

He’s Got a Heart of Gold

Did you know that Lance McCullers Jr. has a foundation for pets and animals? The loving and caring pitcher started an organization that provides safety and shelter to animals, as well as adoptions. The foundation accepts all kinds of animals and focuses on their welfare to make this a no-kill world.

Visit the Lance McCullers Jr. Foundation website to be a part of this amazing cause. You can even donate to help in raising funds.

A whole day dedicated to my favorite animal!?!? ? Happy #nationaldogday to all of my furry friends (especially Minks). We love doing what we can to help keep these babies alive! ?? #lancemccullersjrfoundation #houstonpetsalive

A Platinum Bond Sealed in Paris

McCullers Jr. got down on one knee to propose to Kara Kilfoil in front of the Eiffel Tower.

“So blessed to be in the most magical city with the most wonderful guy. Happy New Year everyone,” she later posted online.

The couple got married in December 2015.