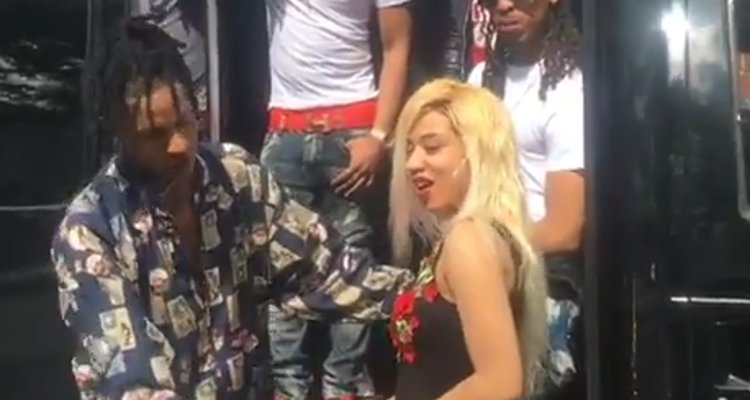 The latest queen in rapper Kyyngg’s life is rumored to be transgender. Kyyngg believes that his girlfriend is sexier than Nicki Minaj and wasted no time in saying so, while introducing her as a star in a web video he is making.

Kyyngg is an American rapper best known for his hit tracks like “Bloodaz” and “Rich & Wild.” Kyyngg has carved out a place for himself in the rap world with mixtapes like Praise We, Kyyngg Slime, and Slime Season 3. He is known for his outlandish style and for using obscene language, even during interviews. Though Kyyngg is only 21 years old, he already has four children with three different women. Just when people thought that the Atlanta-based rapper could not do anything more shocking, he proved them wrong! Kyyngg has hooked up with a woman who is allegedly transgendered. Kyyngg’s “transgender” girlfriend was introduced by the rapper recently in his usual bombastic way.

He is currently working on a movie, which will feature his crew and Kyyngg’s girlfriend. A video was posted by the rapper introducing his crew and his supposed transgender girlfriend, and spoke about the upcoming project. In the short clip Kyyngg says, “We in the moment of shooting a wonderful movie in Atlanta, GA. We dropping a real wonderful movie for y’all real soon. We got beautiful people. Nicki Minaj ain’t got s**t on her. I love you though Nicki.” While the rapper and his supposed girlfriend look close in the clip, no picture of the two can be seen on Kyyngg’s Instagram account.

Kyyngg boasting about his new girlfriend did not go unnoticed. Minaj commented on the video posted on the Instagram account for AkademiksTV that said “I love u too babe. GANG!(when you don’t remember shawty name so u gotta blurt out the first name that come to mind, I could be wrong but don’t it look like that’s what happened?!?! She’s dope tho. Pretty girl. But this video is so fkn icoNIC for many diff reasons. love his accent #Kyyngg #RP @akadmiks. [sic]” People are very eager to learn more about Kyyngg’s girlfriend, as there is next to no information about her available at this point. It has not even been confirmed that she is transgender, but that’s the word on the street. Considering the video introducing her broke on the Internet with over 800k views, we are not surprised that people are buzzing about her!

Love Comes in All Shapes and Forms

Unfortunately, there is no further information about Kyyngg’s girlfriend, or whether or not she is transgendered, which means that we will have to wait for Kyyngg to reveal more information. It’s obvious that Kyyngg is happy with her and we can only hope to hear more about her soon!