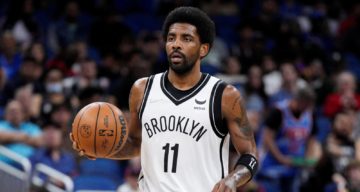 Kyrie Irving #11 of the Brooklyn Nets controls the ball against the Orlando Magic at Amway Center on March 15, 2022 in Orlando, Florida. (Photo by Mark Brown/Getty Images)

With a historic win for the Cleveland Cavaliers last night as they won the NBA Playoffs Finals, sport fans want to know a little more about Kyrie Irving and the Kyrie Irving net worth, which is approximately $30.0 million, with a salary of $7.0 million.

Terms like “How rich is Kyrie Irving?” are gaining more popularity now that he’s part of a championship team and his last score allowed the Cleveland Cavaliers to win Game 7 of the NBA Playoffs against the Golden State Warriors. The Cavaliers star has also been getting much media attention for his personal life, leading fans to look up “Kyrie Irving girlfriend” and get all the details on the 24-year-old star point guard.

Kyrie Andrew Irving was born on March 23, 1992 in Melbourne, Australia. If you haven’t looked up the “Kyrie Irving family,” his father is Drederick and his mother is Elizabeth. He also has two sisters named Asia (older) and London (younger). Irving’s father played college basketball at Boston University. After finishing his college career, Drederick moved to Australia to play professionally for the Bulleen Boomers.

The Irvings relocated back to the United States when Kyrie was two years old (explaining why he has dual citizenship). His mother died when he was four years old from an illness, leaving Drederick to raise his kids with the help of their aunts.

Breakdown of the Kyrie Irving Net Worth

Iwving grew up in West Orange, New Jersey, where he liked to watch his dad play at his adult-league games. The inspiration to play basketball came after playing at an arena in the fourth grade, vowing to play in the NBA. As you can see, he made his dream come true and is now point guard for one of the best teams in the country.

Irving played for Montclair Kimberley Academy but then transferred to St. Patrick High School because he felt he needed a bigger challenge. Irving attended Duke University but was shortly drafted by the Cleveland Cavaliers in 2011. He was Rookie of the Year in 2011 and had his first All-Star season in 2012-2013. The Kyrie Irving stats have made him a profitable player and he will always be one of the top players who scores as many shots in a game. He was also the All-Star MVP in 2013/2014 season.  The Kyrie Irving age may only be 24, but there are no shortages in his career achievements. His final shot allowed his team to win against the Warriors with a final score of 93-89, winning the NBA Playoffs. No doubt, Irving will garner more attention and perks while on contract for the Cavaliers. And despite the Kyrie Irving injury that was sustained in Game 6, he was still able to help win Game 7, ensuring his already impressive NBA career.

Have you ever wondered how Kyrie lives? He lives in a Tudor-style mansion he purchased for a modest $800,000 from former Cavaliers player, Daniel Gibson and his ex-girlfriend Keyshia Cole. His house is in West Lake, Ohio and is a two-storey mansion with four bedrooms and six bathrooms spanning 5,500 square feet. His garage also holds a luxurious car collection, including a 2102 Kia Sorrento.

Like most basketball players, most of Irving’s wealth can be found to be from endorsement deals. Irving has a famous Pepsi commercial as Uncle Drew, which aired in 2011/2012. He also has a Kyrie Irving shoe deal with Nike and has a deal with Footlocker as well.

Irving had a public relationship with singer Khelani Parrish, but the pair broke up after a few months in March. She cut her wrists after several hurtful rumors about her cheating on Irving with PartyNextDoor. Irving released a statement that said he and Parrish were broken up at the time of the photo of PartyNextDoor and Parrish went viral.