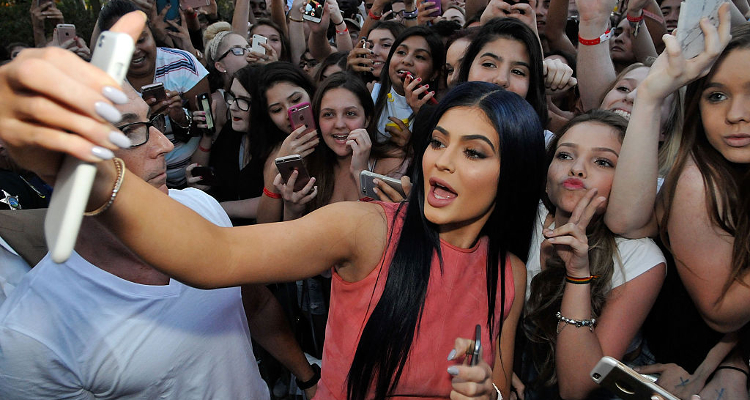 Kylie Lip Kit lovers assemble! Kylie Jenner is opening her second pop-up shop, and this time, it’s in New York City! The 19-year-old entrepreneur shared the first picture of the store opening on her Instagram.

Kardashian by fame and creator of Kylie Cosmetics, Kylie Jenner is opening a pop-up shop for the second time. New Yorkers who want to get their hands on the makeup maven’s lip kits, this pop-up store is just for you! After the success of the first Kylie shop in California, the youngest Kardashian-Jenner sister announced in January that she would be launching another pop-up store in New York City. As details slowly filter in, Kylie shared the first picture of the store and the location on her Instagram page. Check out Kylie Jenner’s Instagram post on her upcoming pop-up store here.

On Wednesday (February 8), Kylie shared the first look at the Kylie Cosmetics NYC pop-up store on Instagram. The picture of the store’s exterior has garnered more than 980,000 likes from her 85 million followers within the first hour. The 19-year-old mentions the address in the caption as “27 Mercer St. New York City.”

Wow can’t believe I’m coming to NYC next week to open up my second Pop Up Shop.. DREAMS!!! I’ll see you guys there.. Address: 27 Mercer St. New York City When: 2/13/17 I’ll open the doors at 10am that morning & will be open daily until 9pm! Store will stay there until supplies run out! XOXO ** Yes, we will be open on Valentines Day

According to a press release for Kylie Cosmetics, the makeup maven reportedly chose the location for her second store opening, “Kylie handpicked this location after touring many spots in and around NYC, and is excited to bring the Kylie Shop to the East Coast, especially for all her fans and customers who missed the launch pop-up shop in California.”

The store will open on February 13 and will feature the much anticipated Kylie Valentines collection. According to the press release, “She has been working on her Valentine’s collection for months, and is excited to share it with the world and bring the same vision and experience to life in the store.” Besides the Valentine’s collection, the pop-up shop will carry sparkly lip kits, as well as her birthday and holiday collections.

Kylie Jenner is also expanding her business by launching a clothing line called “Thick,” which will be available at her new East Coast store, as well as online.