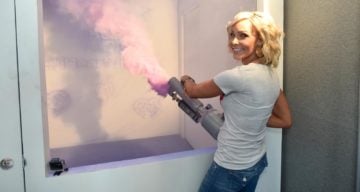 Kyle Unfug during the iHeartRadio Music Festival on September 19, 2015 in Las Vegas, Nevada. (Photo by David Becker/Getty Images for iHeartMedia)

Arizona’s popular radio program The Johnjay & Rich Show celebrated 20 years on air in 2021. Kyle Unfug has been part of the show’s lineup for over a decade and is a huge part of the Phoenix community. New listeners and her new social media followers often ask who Kyle Unfug is. She has been hosting lifestyle content on radio and television for the better part of her career, and often has her viral moments on social media. Find out more about this radio personality in Kyle Unfug’s wiki.

Kyle Ann Unfug was born on October 18, 1982. While she is a native of Denver, Colorado, Unfug now calls Arizona home. She is the daughter of Susie Lynch and her ex-husband.

Unfug’s parents are divorced and have remarried. She credits her stepfather and stepmother for also raising her.

The radio host recently revealed she had not been able to see her father for almost two years due to the pandemic. In that time, her father was diagnosed with and beat cancer.

Her mother Susie was an art teacher at Valley Christian High School, where Unfug was a student.

After graduating from Valley Christian High School in 2000, Unfug enrolled in the University of Arizona. She initially planned to study pre-med, but changed tracks and transferred to Arizona State University where she studied broadcast journalism.

She got an internship at 104.7 KISS FM once she realized she loved radio. The internship led to a full-time job, and she’s been on air ever since.

She’s part of a long-running Arizona radio show, The Johnjay & Rich Show, and also has a TV gig on Phoenix’s KTVK.

Colorado native Fisher studied radio and television at ASU. He has been a voice-over artist since 1995.