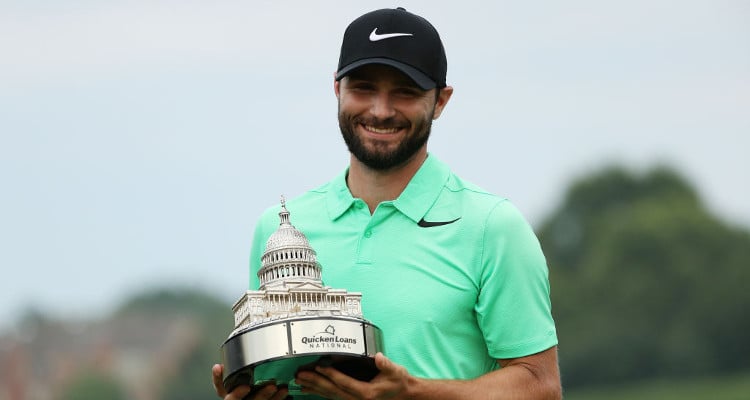 Kyle Stanley won the Quickens Loans National on Sunday, earning a spot in the PGA Championship and the 2018 Masters Tournament. It was his first major win in five years, and he credits his wife for it.

The talented golfer, Kyle Stanley, is now a two-time winner of the PGA Tour after he outlasted Charles Howell III. He won on the first hole of a sudden-death playoff at the Quickens Loans National at the TPC Potomac. He was quite emotional after his win while thanking his family and wife. Kyle Stanley’s wife, Dolly Enneking Stanley, was there to support her husband, and she couldn’t stop gushing about his win. Here’s everything to know about her in Dolly Enneking’s wiki.

Dolly Enneking was born on August 8, 1986, which makes her 30 years old now. She is one of the four daughters of Michael and Debra Enneking. Dolly, her parents, and her sisters Lauren, Elle, and Ivy are from Washington.

Stanley was born and raised in Washington too. After graduating from Bellarmine Preparatory School, he studied sports management at the Clemson University in South Carolina. There, he began his college golf career establishing 18 individual records. He won the 2006 Aloha Purdue Collegiate and the 2008 Carpet Classic.

So proud of my husband this week ❤️

Under her mentor and head coach Laura Schott, she won several titles in the Big Sky Conference in 2009 including the Golden Boot Award, Offensive Most Valuable Player, and Scholar Athlete of the Year. Academically, she was the program’s second player to earn the NSCAA Scholar All-West Region honors in 2009.

Happy Birthday to the best person I've ever known. @kylemstanley I love you!

It’s not known how and when Enneking and Stanley got together. Sometime in 2013, she saw him play for the first time during his third Open Championship. Later that year, he popped the question to her in Bora Bora. They got married in 2015 and settled in Gig Harbor in Washington. Before tying the knot, she went on her last trip as a single woman to Cabo San Lucas where she frolicked with dolphins.

Her Instagram is packed with pictures of the time she spends with her husband outside of golf. They don’t have children yet, but they dote on a pit bull, Dora, that completes their family. They travel together often, and she posted pictures of their time together in Bora Bora, Hawaii, Sydney, Scotland, and many other places. Most of her trips can be attributed to her husband’s PGA tournaments and she seems to enjoy them. But the two seem to be the happiest when they are home.

Nice night in Scotland. Ready to start my 3rd #OpenChampionship. She's ready to watch her first! ?