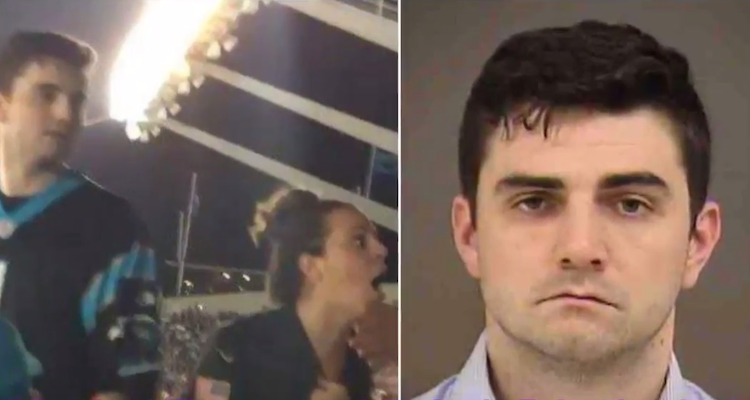 Kyle Maraghy was arrested on Friday night after a viral video of him punching a 62-year-old man at Thursday’s Carolina Panthers game circulated online. The 26-year-old was sent to Mecklenburg County jail but has since been released. A woman assumed to be Kyle Maraghy’s girlfriend was also in the video, and is seen walking through the stadium’s rows while leaving with him that night. For more about the incident and accused, take a look at our Kyle Maraghy wiki.

When the Carolina Panthers faced off against the Philadelphia Eagles on Thursday night, numerous fans had complaints about a couple who remained standing throughout the game, blocking the view of those behind them. In a video that has since gone viral, a man wearing a Panthers jersey—who was later identified as Kyle Maraghy—is seen repeatedly punching a 62-year-old season ticket holder.

Warren Carrigan, who posted the video and allowed multiple media outlets to share it, said he did so to get “justice for the poor old guy who just wanted to watch a football game.”

Maraghy was arrested on Friday after being charged with simple assault. And, we have the details about what happened in Kyle Maraghy’s wiki.

Kyle Maraghy, age 26, and an unnamed woman assumed to be his girlfriend, were at the Bank of America Stadium on Thursday night. They got into a verbal altercation with the man sitting behind them, but it quickly turned physical.

In the disturbing video, Maraghy is seen violently punching the victim in the face after the two look to be arguing. Once fans proceed to push the accused away from the 62-year-old, the woman believed to be Maraghy’s girlfriend attempts to interfere, before being led by him through the rows, fleeing from the scene.

According to Carrigan, “dude bro & his chicka were standing for the entire game. words gradually got more and more escalated. there previously was a single mom and her son between us, they left halfway through the 3rd. after that, the lid was off. the dude took offense to the couple never sitting down and obstructing his view. the victim telling the dude bro how they’re being jerks and how rude they are for not sitting. the dude bro turns around and calls the victim a “geriatric f**k”, “f****t”, and “hick”. then sucker punches him right in the face. i don’t know if he got away or left in handcuffs, but i hope it’s the latter. [sic]”

It was reported that the victim was treated at the scene after suffering bruises and scratches from the attack.

.@CMPD has arrested Kyle Adam Maraghy, charged him with simple assault in connection with this incident. He is being taken to Meck jail. https://t.co/yYF774IbkR

This is not the first time Maraghy faced similar charges. He had an assault charge in 2013 that was subsequently dropped, but details about what happened are unknown.

Neither Kyle Maraghy’s family nor the accused spoke out regarding the incident. The NFL is said to be working with Panthers security and taking the matter “seriously” after the team issued a statement about the “unacceptable” behavior that neither the team nor Bank of America Stadium “condone.”

Since the allegations, it looks like Kyle Maraghy’s Instagram account has been deleted, as evidence of his social media presence can’t be found. However, this only resulted in a fake page created in his name, which is being used to insult the accused with derogatory names.

A reporter caught a video of Maraghy being released from jail, being escorted by an unnamed man. He refused to comment on why his actions turned violent or offer a statement.