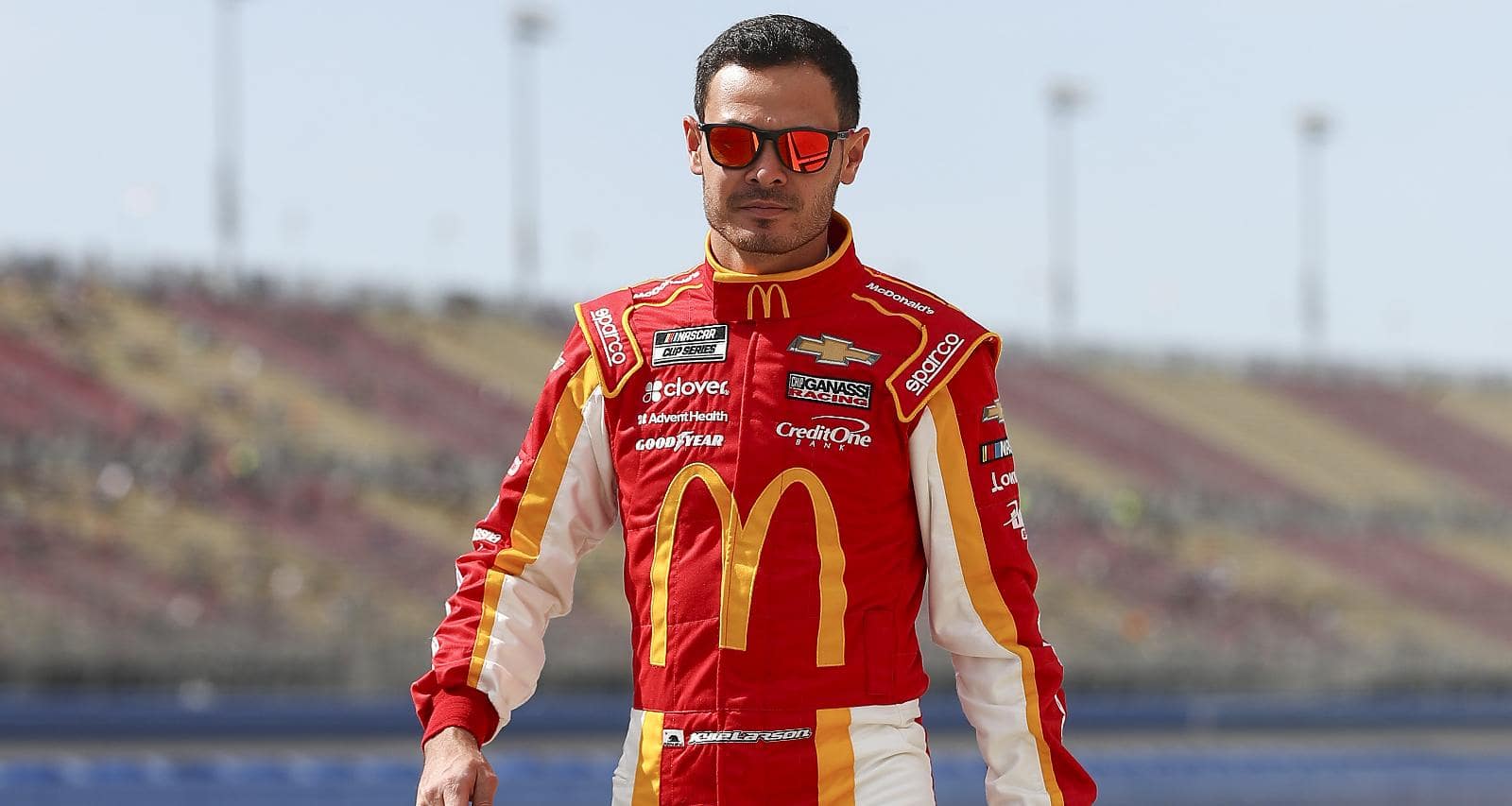 Kyle Larson, driver of the #42 McDonald's Chevrolet, walks on the grid before qualifying at Auto Club Speedway on February 29, 2020 in Fontana, California. (Photo by Meg Oliphant/Getty Images)

Kyle Larson was dropped by several sponsors and lost a multi-million-dollar contract with Chip Ganassi Racing when he used a racial slur during a virtual racing event that streamed on Twitch. Before the incident, he was lauded as a promising star in NASCAR who’d built an estimated net worth of $12.0 million in 2020. With his racing fortune, Larson ranked among the highest paid auto-racing drivers in the world. While his career is far from over, his wealth could be affected by the loss of sponsors.

Kyle Larson was born on July 31, 1992 in California. He has Japanese ancestry from his mother’s side.

The Asian American broke into NASCAR with the Driver for Diversity program, proving to be a promising star on the tracks.

Larson transitioned to NASCAR Nationwide Series full-time in 2013. It was announced that he would drive the No. 42 car in the Sprint Cup Series for Chip Ganassi Racing. That same year, he won Rookie of the Year, becoming the first Asian-American and first Drive for Diversity participant to win this award in one of NASCAR’s national touring series.

In 2019, Larson and Ganassi were in talks about his contract, which was close to expiring. Larson’s contract was expected to last through the 2020 season.

From his interviews, it seemed that the young driver was keen on staying with Ganassi, but there wasn’t much insight about their contract negotiations. There was also speculation about potential lucrative contracts with Hendricks Motorsports or Tony Stewart Racing in the 2021 season.

While sporting seasons are suspended amid the coronavirus lock-down, Kyle Larson was participating in a virtual racing event, iRacing.

In the Twitch stream, Larson used the N-word during a communication glitch with his crew chief and spotter, not realizing that it wasn’t a private stream and everyone could hear him.

Ganassi’s immediate response was to suspend Larson without pay. Larson apologized for dropping the N-bomb.

When sponsors were pulling their support, the team had to appease them. So, Ganassi fired Larson the following day.

Larson had one top-five finish and three top-10 finishes in four starts in the 2020 season prior to NASCAR suspending the season and his subsequent dismissal.

The following table illustrates how Kyle Larson’s wealth compares to other drivers (before his firing).

Sponsors Cancelled Their Support to Larson

Larson had multiple sponsors during his racing career, which earned him a fortune. He has partnered with Target, Chevrolet, Oakley, Credit One Bank, iRacing, and Alpinestars during his career.

Credit One had become his primary sponsor for the 2018 season, while Clover, owned by First Data, sponsored his 2017 season. McDonald’s and Ganassi Racing have a significant partnership. which saw the Big Mac giant sponsoring Larson in the 2019 season. Larson’s modified Chevy Camaro was painted in the signature McDonald’s color scheme.

His multiple sponsorships, along with the Ganassi Racing contract, ranked Larson in the top 10 of Forbes’ list of NASCAR’s Highest Paid Drivers in 2018. His earnings that year totaled $10.1 million, with $9.0 million in winnings and $1.1 million in endorsements.

Also Read: Delonte West’s Net Worth; Is He Really Homeless?

The year 2018 was also the year he ranked in Forbes’ 30 under 30 – Sports. Larson also has been climbing the ranks in merchandise sales, further adding to his wealth.

But his N-bomb changed all of that.

McDonald’s and Credit One Bank were among the many sponsors that withdrew their support from Larson. However, they didn’t sever their longstanding ties with Ganassi. So, to preserve that, the team fired Larson.

All but one personal sponsor has pulled the plug on financial support to the driver, denting his $1.0-million annual endorsement earnings. This could impact Kyle Larson’s net worth unless he finds a new team with sponsors willing to pay for building his car for the 2021 season.

Larson Bought His First House When He Was 21

When Ganassi Racing took a chance with a then 19-year-old driving upstart, they set him on the path to NASCAR fame.

By 21, the rising star of the speedway that was Kyle Larson was capable of buying his first home, a luxurious one at that, in Mooresville, North Carolina.

Dale Earnhardt Jr. and Brad Keselowski teased him about his new home probably being filled with multiple televisions and video game consoles. But perhaps that new house that he bought in June 2014 had to be adapted to a new arrival—that is Larson and then-girlfriend Katelyn Sweet’s son, Owen, who was born in December 2014.

Just closed on my first ever house. Pretty exciting day.

Their daughter Audrey was born in May 2018. Larson and Sweet tied the knot that same year, in September.

Also Read: Rush Limbaugh Net Worth – How Rich Is the Conservative Radio Host?