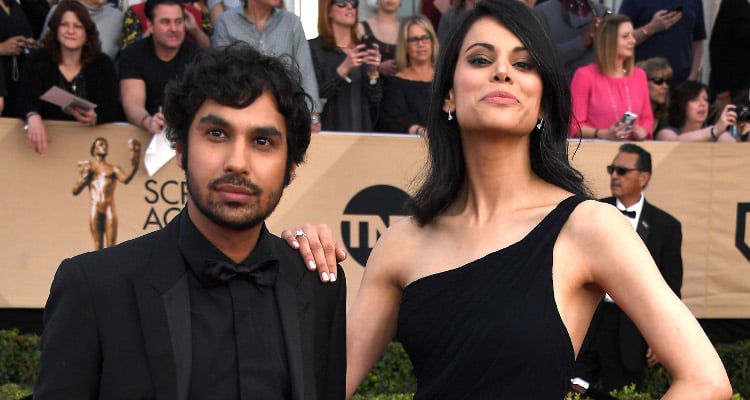 Kunal Nayyar, just brought the house down on Drop The Mic, rapping against co-star Mayim Bialik! Nayyar, who plays the infamous Raj Koothrapali on Big Bang Theory, has definitely caught media’s attention! From a guy who can’t talk in front of women, to a guy who just dissed the life out of Amy Farrah Fowler, Nayyar was the entertainer of the night! Many are now wondering if this slayer on the mic has a wife. Who is Kunal Nayyar married to? We’ve got the scoop.

Kunal Nayyar’s wife is Neha Kapur, who was Miss India 2006, and she married Nayyar in 2011. The Big Bang Theory actor has landed some pretty interesting roles, but the most important one so far was that of a husband. On the other hand, Kapur had aimed to make her career in the fashion world, and today she runs a successful clothing company. Read more about her in our Neha Kapur wiki.

Neha Kapur was born on March 31, 1984, making her age 33. She was born and raised in India, in a Punjabi Hindu family. Though there is not much known about the model/designer, we do know that she is a professional dancer. Kapur has had professional training in classical dance forms from India. She has trained in Kathak for eight years, and in Bharatanatyam for four years.

Neha Kapur graduated in Fashion Design from Pearl Academy in India. She went on to take up modeling and ultimately took part in the coveted Miss India contest in 2006. Along with the crown she even won, Miss Fresh Face and Miss Photogenic. Kapur participated in Miss Universe 2006, and reached the top 20 but she couldn’t win the international contest. Nonetheless, she was determined to take up a career in fashion.

When Kunal Nayyar proposed to Kapur, all the fans knew it was going to be a grand ceremony, and it was! Like many Indian weddings full of color, food, and fun, Kunal Nayyar and Neha Kapur got hitched in 2011, while she reportedly wore a Tarun Tahiliani outfit.

Nayyar and Kapur were married in a traditional Punjabi ceremony, including all the pre-wedding ceremonies like mehendi and haldi. Check out some Neha Kapur Instagram pics of her wedding to Kunal Nayyar:

A post shared by matea & kristina (@iamnotcrazymymotherhadmetested) on Dec 30, 2015 at 1:51pm PST

Kunal Nayyar lives with his wife in Los Angeles, and their beautiful home was featured in the go-to home guide magazine Architectural Digest, in their September 2017 issue. The couple apparently searched far and wide for their perfect home, and finally settled on a 1948 Spanish Hacienda styled home in L.A.

The home is carefully curated with Indian roots and modern home decor, and Neha Kapur being a designer and all, gave their home an ethnic twist, which according to the magazine, gave you a sanctuary-like feeling when you walked in.

@kunalkarmanayyar and @nekapur spent nearly a year seeing properties of all styles across L.A. before being struck by this 1948 Spanish hacienda. Neha—a former Miss India and the designer behind luxury fashion line @Hensely_, which launched last fall exclusively on @modaoperandi—saw past the home's Baroque fountains. The façade's unique shade of pink drew her in, as did the property’s somewhat triangular shape. “In India there’s this thing called gou-mukh. It’s very auspicious if the house opens into the back like a triangle—it’s very good in Indian culture,” Neha explains. “You walked in and just felt you were in this sanctuary.” Get a look inside through the #linkinbio Photo by @monicawangphoto; text by @katromeyn

BTS for @archdigest shoot. The moment Bobafett realized his love for the lens! Me in my @hensely_ ❤️#archdigest #home #bobafett #hensely #bts

Neha Kapur took her fashion design background seriously and went on to create a luxury clothing line that reflects her style of thinking. Hensley is promoted with the caption “Embracing femininity and the individual,” and if you head over to the Instagram page, you’ll see why there is an attraction in simplicity. The couple is doing very well for themselves. With Kunal Nayyar’s net worth estimated at a whopping $45.0 million and Kapur’s clothing line doing so well, they shouldn’t have a problem raising kids, when they choose to!