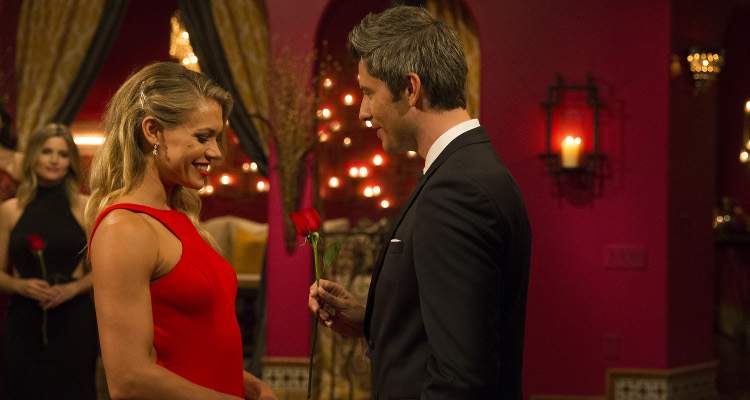 The second episode of The Bachelor was filled with happy moments, revelations, fights, and of course, drama. However, it looks like some contestants are already losing their minds! Two women already seemingly at odds are Krystal and Bibiana. But after earning a rose on her one-on-one date, Krystal from The Bachelor has already made an enemy by trying to steal more time with Arie.

Krystal was given the second one-on-one date with Arie in the season’s second episode. For their date, they flew to Arie’s hometown of Scottsdale, Arizona to meet his family (Wow, things are certainly moving fast this season!) because of her “really great first impression.”

Before Arie took her home, he gave Krystal a tour of his hometown and showed her the Pizza Hut he used to work at. Krystal explained in a confessional, “It’s crazy to think that if I lived with Arie, this could be my life.” They even looked at Arie’s childhood photos and videos, which made her extremely emotional. Krystal was excited but nervous to meet Arie’s parents. She confessed that she came from a broken home and had a tough upbringing. She was truly inspired by Arie’s parents and their marriage, but was a little anxious to tell Arie that she does not share the same bond with her family.

Krystal gathered the courage and told Arie that she was brought up in a “less traditional way.” Her parents divorced when she was young, her father was not in the picture, and she is not that close to her mother. She also added that she would look after her younger brother while growing up, and recently found out that he was living on the streets. Arie comforted her by saying that he is not scared of her past and ultimately gave her the date rose. Their date ended with a private concert by Connor Duermit.

And that’s not even the mic drop. #TheBachelor pic.twitter.com/FHxZwT04Iz

Although Krystal had an amazing time with Arie, she refused to share the details of their date with the rest of the women. They were not really happy about it and thought that she was being shady for not spilling the deets. Many of the other girls were infuriated that she kept interrupting their alone time with Arie during the cocktail party at the mansion. Bibiana was especially upset and called Krystal a “selfish bitch” in the confessional.

When Bibiana finally got her time to talk to Arie, Krystal interrupted. Bibiana sent her away, but unfortunately, their conversation was cut short. Bibiana was livid at what Krystal did saying, “This bitch is trying hard to piss people off.”

When Krystal came back to join the ladies, Bibiana told her, “I really think you have a lot of balls just coming to sit down with us. Why would you come try to sit next to me knowing that you already had a rose and you had time with him early? You upset me and you already upset everyone else,” adding, “You just dug a big ass hole for yourself.”

Well, The Bachelor 2018 contestants are certainly trying to please Arie in order to win a rose, and more importantly, his heart. Right now, there is definitely bad blood between Krystal and Bibiana. For more from this season’s villain, you can follow Krystal from The Bachelor‘s Instagram account. Make sure to tune into The Bachelor Monday nights at 8:00 p.m. EST on ABC for even more drama!