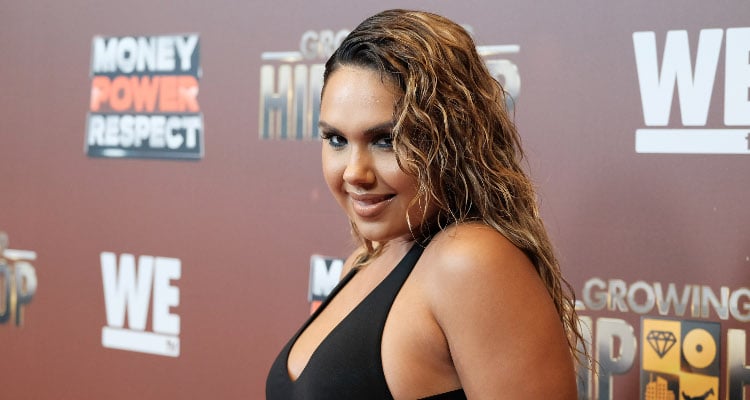 Kristinia DeBarge is one of many second-generation hip-hop stars navigating their careers and family dramas. While she tries to solve a family conundrum, we haven’t heard from Kristinia DeBarge’s mother.

Growing Up Hip Hop may be about second-generation famous hip-hop artists, but Kristinia DeBarge is doing just fine for herself. She’s got new music on the way, signed a movie deal, and her steamy music video for “Pink Love” is out. But she’s dealing with some family drama and wants to get to the root of it.

Who Is Christine McDonald?

Christine McDonald is 27-year-old Kristinia’s mother from her marriage with James DeBarge of the musically-famous DeBarge family. But not much is known about McDonald since she tends to stay out of the limelight. She rarely appears on GUHH even though James DeBarge has a big presence on the show.

According to some sources, McDonald is much younger than DeBarge. She reportedly gave birth to Kristinia when she was still in her teens. McDonald also made a few appearances on DeBarge’s Instagram, looking incredibly gorgeous might we add!

Recently, McDonald celebrated her birthday at celebrity chef Gordon Ramsay’s restaurant in Las Vegas with her daughter. DeBarge even shared a throwback photo of Mother’s Day this year with a heartfelt message.

Although Kristinia DeBarge comes from a famous musically-inclined family, it appears that her mother was the one who encouraged her to pursue her hip-hop dreams.

Happy Mother's Day to my Beautiful mommy!! Thank you for always being such an amazing mom to me. Your love goes beyond words. You never judged me, you always took my side even when I was clearly wrong, you sacrificed for me so that I could have everything a little girl could ever dream of and more.. you always told me to go after my dreams.. even when they seemed far away, you gave me strength and support in my happiest and saddest times, & last but certainly not least you loved me unconditionally more than you loved yourself and for that I wanna say thank you! Thank you for showing me the true meaning of love. I love you Moma ?♥️? #happymothersday #mommyandme #mommasgirl #iloveyou

She Could Have a Stepdaughter

James DeBarge is famously known for his one-year marriage with Janet Jackson. He married Jackson in 1984, but they annulled their marriage in 1985. At that time, it was believed that the couple didn’t have any kids.

Last season on GUHH, DeBarge dropped a huge bomb on Kristinia. He said that he might have a daughter with Janet Jackson! “To be honest with you, I didn’t know,” James told Kristinia. He continued, “I was under the impression that there was no baby, and I wanted to believe it’s not true. But it is.”

At that time, speculation about Janet Jackson’s unknown child was rife in the media. The now 51-year-old was pregnant with her first child with husband, Wissam Al Mana.

According to DeBarge, Jackson secretly gave birth to their child and put her up for adoption. And years later, he was contacted by the former couple’s alleged daughter.

In a recent episode of GUHH, Kristinia meets her alleged half-sister for the first time. She has her doubts about this woman claiming to be her father’s daughter, so they both decide to do a DNA test. If they did the test, the results are yet to be known.

But throughout all this, we haven’t from DeBarge’s mother and we probably won’t. It appears that Christine McDonald would rather keep out of the spotlight.

#Mommymonday Just wanted to show some appreciation to my moma and let her know she's the best mom in the whole world and I don't know where I'd be without her love & Support! Thank you for always believing in me and loving me unconditionally. I love you always ???

The DeBarge family has a rich multicultural heritage, and McDonald adds to that. Kristinia is African-American, English, and French-Canadian from her father’s side, while her mother is of Mexican, Italian, Norwegian, and Irish descent. Kristinia DeBarge is certainly one exotic beauty!

Had a great time with my mom for her bday in #lasvegas this week. I love you Mommy! You're my everything!! Thanks for letting me spend your bday with you & Dan! We def gotta go back to Gordon Ramsey! It was so goood!! Thank you @h_u_n_t_e_r_r_r for spoiling us at the Drybar ?? #ilovemymom #happybirthday #drybar