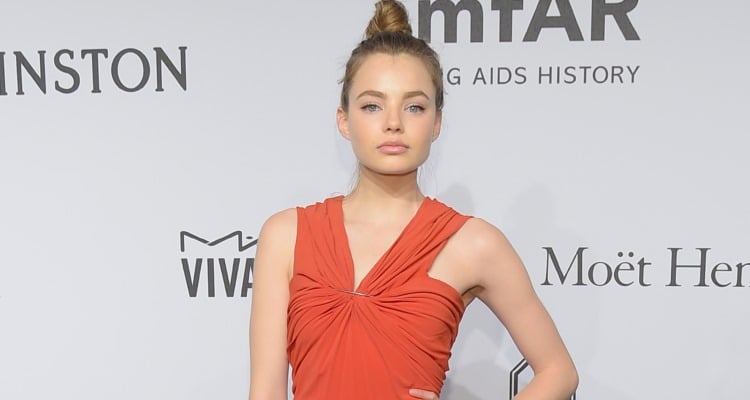 On Thursday, The Weeknd released a five-minute, bloody, action-packed music video for the latest Starboy single, “False Alarm.” The creators teased it with a “parental advisory” warning before the video began, and after you watch it, you’ll understand why! Ilya Naishuller, Hardcore Henry, directed the video and it plays out like a first-person shooter video game, where the camera shows the point-of-view perspective of a bank robber during the most climactic part of an adrenaline-packed hostage situation. The robber and his squad are all wearing masks through most of the video, but their prize hostage is an unmasked, stunning young woman who everyone has dubbed, the “False Alarm” girl. Who is she? Her name is Kristine Froseth and yes, she is stunning! We’ve got some interesting facts to share in our Kristine Froseth wiki.

In the video, which we’ve linked below, the robber and his crew have already murdered most of their hostages in the bank, and decide to take off with a girl they’ve already handcuffed. They place her in their getaway van and drive off in a high-speed, explosive chase as they flee from the police. Gunshots fly between the two groups, injuring and murdering some. The final two robbers, who have survived the chase, make it into a second truck with their hostage. It eventually comes down to the ring leading robber and the girl. He was wounded in the crossfire, and as an act of mercy he insists the girl run to safety, with the money in tow.Then, he removes his mask, revealing his identity. But there’s a twist! Check out the video below to see it for yourself, but beware, this is an extremely violent video and is not appropriate for children.

Kristine Froseth’s age is 19 (born September 21, 1997). She was cast as the female lead in Jeff Davis’,Let the Right One In (2017) pilot, an eerie drama about a tormented boy who finds a friend in a charismatic vampire girl. Her other acting performances include, Junior (2016), Prey (2017), and Rebel in the Rye (2017). She’s also a model, who has been signed by Supreme Management, and stands at 5 ft. 7 in.Check out these great pics of the beautiful Kristine Froseth (@kristine_froseth), as we are sure we will be seeing a lot more of this beauty very soon!

Vogue China by @simonemmett styled by @charlotte_annefidler makeup @pollyosmond hair by Kerry Warn! So happy I made it to the right set in the end..? #bighairdontcare ??