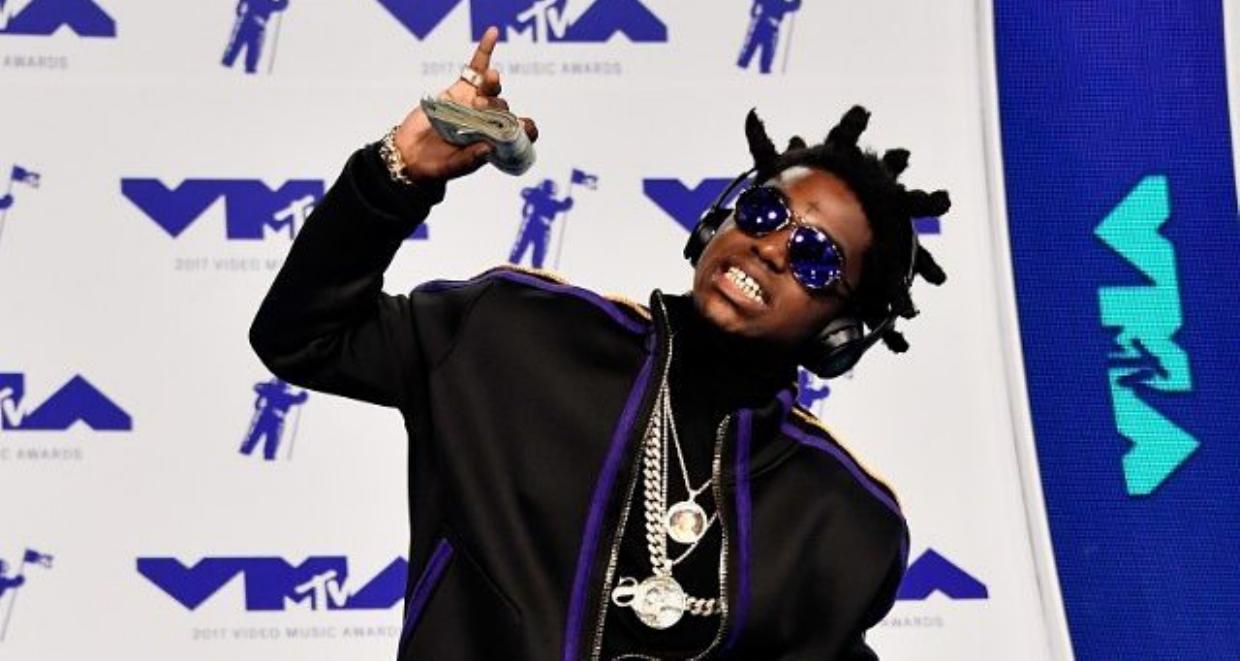 Kodak Black is a rapper, but he is mostly famous for all his crazy antics. The 20-year-old is well-known for his legal issues. So, where is Kodak Black from and what is his net worth? If you are curious to know more about him, then keep reading for details from Kodak Black’s wiki.

If you have heard the songs “No Flockin” and “Tunnel Vision,” then you probably know that we are talking about the rapper, Kodak Black. At a very young age, Kodak Black decided to pursue a career in the rap industry.

While his songs didn’t garner him much attention, his legal issues and numerous controversies certainly did.

The rapper’s parents are immigrants from Haiti. He was raised by his mother, Marcelene Octave, in Golden Acres, which is a public housing project in Pompano Beach.

Pompano is a city about three miles north of Miami. And according to sources, it houses the largest percentage of Haitian migrants.

When Kodak’s mother moved from Haiti, she stayed in Golden Acres. Meanwhile, his father lived in other housing projects like Ely Estates.

In an interview, Kodak claimed that he loves his mother to death and wants to become a rich man for her. His mother also told him that one day he would be wealthy.

His relationship with his father is reportedly strained. He also revealed in the interview that his father has five kids with his goddaughter.

Kodak has an older brother, John Wicks, who was born Masnik Sainmelus.

In 2014, Kodak revealed that he was pursuing his high school diploma at Blanche Ely High School in Pompano Beach.

The rapper has a son named King Khalid Octave with Jammiah Broomfield. Although they are reportedly no longer together, Kodak agreed to pay $4,200 every month until 2033 for his son. Additionally, Kodak Black’s son will also have all his health insurance costs covered.

There were reports that the rapper was dating the Internet sensation known as Cuban Doll, after a video of them entangled with one another was posted on Instagram.

In the video, Kodak forces Cuban Doll to get on her knees and propose to him. However, it looks like they were just fooling around and it was not a real proposal. Also, neither of them ever confirmed their relationship.

Kodak Black read thesauruses and dictionaries to make his vocabulary strong. But he got into a lot of trouble at a very young age. He constantly got into fights and would reportedly go on “breaking and entering” sprees with his friends.

When he was in fifth grade, Kodak was thrown out of school for fighting. So, he had two options while growing up; either sell drugs with a gun or rap.

Kodak Black said that he started using the nickname Lil’ Black or simply Black at the age of six. And when Instagram was introduced, he chose the handle, “Kodak Black.”

The rapper explained, “When I started rapping, they liked that name better. When I was just ‘Black,’ that was simple, that was original, and the name, it makes itself. Just cuz I say ‘Kodak Black’ people search my name up, like ‘what does that mean, Kodak Black?’ It’s a long name, you wanna know what I’m talking about.”

Start of His Rap Career

Kodak Black showed an interest in rap music at a very young age. He started rapping when he was in elementary school with his cousin and homeboys after school in front of older boys. Soon enough, he started going to a trap house to record his raps.

At the age of 12, Kodak became a part of the rap group called Brutal Youngnz, and in 2009, he began using the stage name, J-Black. He later joined a local rap band known as The Kolyons.

In 2015, the rapper gained more popularity when fellow rapper Drake posted a video of him dancing to one of Kodak Black’s songs called “Skrt.” That same month, Kodak signed a contract with Atlantic Records.

Kodak and rapper Lil Uzi Vert announced in May 2016 their decision to join forces for their “Parental Advisory Tour.” However, Kodak didn’t show up for the tour!

In May 2016, Kodak appeared on French Montana’s single “Lockjaw” from his mixtape, MC4. That same year, Kodak’s single “Skrt” peaked at No.10 on Billboard’s Bubbling Under R&B/Hip-Hop Singles chart in August 2016.

Success finally seemed to arrive on his doorstep as Kodak’s fourth mixtape, Lil B.I.G. Pac (which was released on June 11, 2016) peaked at No. 49 on the Top R&B/Hip-Hop Albums chart and No. 18 on the Heatseekers Albums chart.

A month later, on March 31, 2017, Kodak released his debut studio album, Painting Pictures. The album was well-received by listeners and it peaked at No.3 on the Billboard 200.

Singer Cardi B released her song, “Bodak Yellow,” in 2017, which peaked at No. 78 on the Billboard Hot 100. Her song is reportedly all about rapper Kodak, and she explained that it was inspired by his song, “No Flockin.”

On August 18, 2017, Kodak released his mixtape, Project Baby 2. That same year, a deluxe version of it called Project Baby 2: All Grown Up was released. One of its singles, “Codeine Dreaming,” ranked at No. 52 on the Billboard Hot 100.

Kodak was again in the midst of controversy in 2016, when a studio session video was released showing him allegedly making fun of African-American women Apparently, his lyrics suggested dark-skinned women were less attractive than their light-skinned counterparts.

The rapper was in the midst of controversy again while talking about rappers Lil Uzi Vert and Lil Yatchy. He insulted them on an Instagram live stream, but Lil Uzi Vert was apparently not bothered by his remarks.

Either way, it seems like Kodak Black is the king of controversy and enjoys the attention.

In the start of 2017, Kodak broadcasted a live Instagram video of himself with several other guys in a Washington D.C. hotel room. In the video, a woman was performing oral sex on them, and the rapper even posted a tweet about the incident!

If I Could Change I Swear I Would .. I Tried Everything But I'm Just So Hood #Cohiba pic.twitter.com/Zz1fYOK16l

In June 2017, Kodak took to Instagram and said that he prefers light-skinned women over dark skin. A lot of users on the social media responded negatively and provoked him to delete his Instagram and Twitter accounts.

Kodak kicked up a storm again in August 2017 when he allegedly accused Master P of trying to make money. Meanwhile, Master P had been guiding Kodak since July.

In between, rumors were also floating around stating that Kodak slept with Danielle Bregoli. However, the rumors were never confirmed. (Remember, the “Cash Me Outside” girl is still a teenager!)

Because of his antics, Kodak had been placed into a youth detention center three times in one year, and he was also on probation. In fact, he has already been arrested countless times throughout his life and he’s only 20 years old!

In October 2015, Kodak Black was arrested in Pompano Beach and charged with possession of cannabis, battery, stealing, and fake imprisonment of a minor. However, he was later released.

The rapper was reportedly arrested six months later in Hallandale Beach, Florida. He was charged with possession of a weapon by a convicted by a felon, possession of cannabis, and running from police officers.

Kodak was arrested again a month later in Broward County, Florida. This time, he was charged with false imprisonment and robbery, and was detained while in custody.

In August 2016, when Kodak appeared in the Fort Lauderdale, Florida court, many of the Atlantic Records executives were present. They explained that Kodak had a bright future ahead of him as an artist.

Kodak pleaded no contest to all the charges. And as per the plea agreement, he was to be kept on house arrest for a year, serve five years probation, take anger management classes, and perform community service.

However, before his release from the Broward Main Jail, police found out about two outstanding criminal warrants. One was for criminal sexual assault and the second one was due to possession of cannabis.

As a result of the outstanding warrants, Kodak was not released from the jail.

When he was in prison, Kodak started to identify himself as a Hebrew Israelite after a prison ministry priest studied scriptures with him. He later even filed to change his name to Bill Kahan Blanco. (Kahan means “priest” in Hebrew.)

In September 2016, the rapper pleaded no contest to two drug charges and had to serve four months in jail. In addition to Kodak Black’s jail sentence, he was not allowed to drive for a year.

After his release from the Florida jail, Kodak was taken to Florence, South Carolina, based on the charges of sexual assault. He reportedly raped a female fan during his February 2016 performance.

A grand jury in South Carolina indicted Kodak in April 2017, and was to be tried on a first-degree criminal sexual case. His anger management counselor also explained that the rapper disturbed their class.

In May 2017, Kodak was sentenced again to 364 days in the Broward County Jail for breaking his house arrest. He was given the option of early release upon completing a life skills course. Although he was released in June 2017, it was reported that he will be under house arrest for a year and will serve five years of probation.

The rapper’s house was raided in January 2018. He was arrested from his Pembroke Pines home in Florida on several charges stemming from an Instagram live-feed video that showed him passing around a gun and marijuana in front of a small child.

Kodak was charged with theft of a firearm, marijuana possession, child neglect, and possession of a firearm by a convicted felon.

In April 2018, Kodak was sentenced to 364 days in prison but has a chance to get out on good behavior. He has already served 90 days of his prison sentence.

According to sources, Kodak will be in the Florida jail until September.

Kodak Black’s net worth is estimated at $600,000, which is mostly because of his album sales. Additionally, the rapper earns a good amount of money from his apparel brand, Sniper Gang, which sells t-shirts, gloves, face masks, hoodies, and sweatpants.

In 2017, Kodak even attended the 2017 MTV Video Music Awards at The Forum in Los Angeles. While posing for the paparazzi and others, the rapper threw $100 bills on the ground, but later picked them up with somebody else’s help.

Kodak Black was nominated at the Grammys in 2018 in the Best Rap Song category for co-writing Cardi B’s song “Bodak Yellow.” Additionally, Kodak was also nominated for the 2017 BET Hip Hop Awards in the category Best New Hip-Hop Artist.

So clearly, it’s not for lack of talent that the rapper is constantly in the news. But obviously, he needs to stay in line if he expects to succeed in the music industry!

Also Read: Kodak Black’s House Raided: Is He in Jail Again for Possession of Firearms?