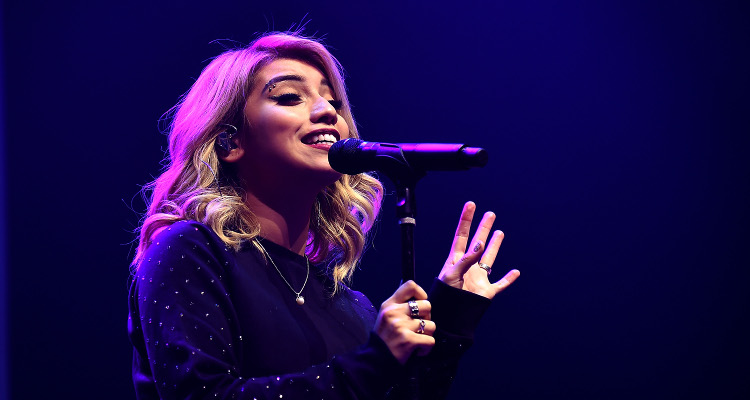 It’s Christmas time, and that means it’s time for A Very Pentatonix Christmas special. The Grammy-winning a Cappella group has dropped their newest Christmas album, and the only girl from Pentatonix, Kirstin Maldonado, is more than excited that their song “Deck the Halls” has over 40,000 views already! Keep reading to know more about her right here in Kirstin Maldonado’s wiki.

Kirstin Maldonado’s fiancé, Jeremy Michael Lewis, went down on one knee in the city of love, Paris, and proposed to her. Maldonado has been engaged for more than a year now, but no plans for a wedding are confirmed yet. While fans want to see the 25-year-old in all white, she is more than excited to don red and green for the holidays.

Get the scoop on Pentatonix’s girl with a golden voice.

Born with a Golden Voice

Born on May 16, 1992, Kirstin Maldonado’s age is 25. Maldonado has a rich cultural lineage. She was born to a Spanish-Italian mother, Angelica Maldonado, and a Mexican father, Michael Cisneros. Her mother raised her in Arlington, Texas, and it is unclear as to why her father was missing from the scene, or why they didn’t take his last name.

Maldonado was not more than eight when she knew she wanted to be a singer. She told her mother about her passion, and she even sang at her mother’s wedding reception. The youngster ultimately convinced her mother that she wanted to pursue music and began taking voice lessons.

The aspiring singer went to Martin High School, along with her current bandmate, Scott Hoying, and met Mitch Grassi through local theater community. The trio knew each other for a very long time, but they didn’t form a group until much later.

The Highs and Lows of Forming a Band

Grassi, Hoying, and Maldonado were in sync, not just as friends but as singers, too. They began doing cover songs around their school. Their perfect notes and melodious pitch began gathering attention.

Maldonado did some theater stints in local productions around the Lone Star State, and things began rolling for her.

After she graduated high school, Maldonado went to the University of Oklahoma in 2010. She was taking up a degree in music at the university, but she dropped out. And as they say, things happen for a reason!

Maldonado quit college because she received a call from her friend, Scott Hoying, asking if she wanted to be in an a cappella band he was trying to put together. He said Mitch Grassi was also involved in the band, and that they were looking to make it to NBC’s The Sing-Off, an a cappella competition.

Although Maldonado agreed to join the band, they didn’t realize the talent they had among themselves. They also decided that they needed a bass voice, and that’s where Avi Kaplan came in. And even after that, a friend of theirs suggested that they needed a beatboxer to make the band complete.

While looking around for a beatboxer, a video of Kevin Ousala found it’s way to them. Not only was he an amazing beatboxer, but he also played the cello simultaneously! It’s called “celloboxing.”

In 2011, Pentatonix was born. They won the competition in season 3 of The Sing-Off that year, and went down in music history!

Maldonado and the boys knew that they were good at covers, and had already seen some success with them before. So, they moved to Los Angeles to get a hold of an agent who can take them to the next level.

In 2012, Madison Gate Records picked the group up, and they began working together. They started working on their first album, PTX, Volume 1, which featured originals and covers by the band.

The band’s popularity picked up pace, and before you know it, they won three Grammy’s in 2015, 2016 and 2017, for Best Arrangement, Instrumental or A Cappella.

According to sources, Kirstin Maldonado’s net worth is estimated to be worth $8.0 million. She won $200,000 as a cash prize from the NBC competition and reportedly receives an annual income of $750,000 from Pentatonix.

In 2016, Pentatonix was on their European tour and had landed in Paris for one of their shows. Little did Maldonado know that she was about to receive more than just fan love!

Her boyfriend, Jeremy Micheal Lewis, popped the question in a strategic location in front of the Eiffel Tower, and Maldonado couldn’t say no! Love was in the air, and the couple announced the engagement on Instagram, too.

Now, fans are wondering about the Maldonado-Lewis wedding. It seems as though Maldonado is in no hurry to walk down the aisle. But, she has confirmed one thing about her wedding, and that is that she will not sing on her special day.

Maldonado said, “If any friends want to do it, that would be really special. I would really appreciate that.”

The songstress continued, “But we just want everyone to be able to relax and have fun and enjoy themselves and not stress out.”

The group announced the sad departure of their bass voice, Avi Kaplan, in August this year and had to find a replacement.

“We’re definitely gonna work on finding a new person for it, and it’ll just be a new chapter. I’m looking forward to what that new chapter will be. It’ll be different, but I think it needs to be,” Maldonado said.

When asked if she was thinking about going solo in the future, Maldonado said, “I was the last baby bird to fly from the nest because all the other guys have had music or have been putting up covers all this time, and I have of been chilling and relaxing and not really doing it yet. But I’m glad I waited because I feel really good about what I’m putting out now.”

So, whether you are a Pentatonix or Kirstin Maldonado fan, you’ll be seeing a lot more of the “Hallelujah” singer in the future for sure.