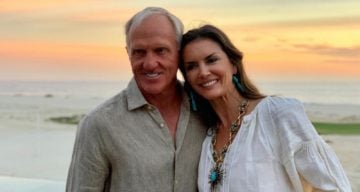 Golf legend Greg Norman’s seemingly innocent Instagram post turned out to not be so innocent. With that viral picture, the Internet is curious about “Mrs. Shark.” Greg Norman and his wife, Kirsten Kutner, had a whirlwind start to their relationship. But this globetrotting couple is still going strong, and revealed that when they renewed their vows after 10 years of marriage this month. This Kirsten Kutner wiki reveals more about their marriage.

Kirsten Kutner was born on May 7, 1968. Her maiden name is not known. The Australian-born interior designer is reportedly from Sydney.

Kutner has German and Filipino ancestry from her parents. Her mother, Margaret, and aunt, Geraldine, are from the Philippines.

Margaret and her late sister are from Cebu City where their family was based. Margaret still lives in Cebu and, according to Kutner’s Instagram post, is in quarantine.

Kutner and husband Greg Norman owned properties in the U.S. until 2021. The couple is reportedly heading back to Australia after selling their properties to be closer to their family back home.

Kirsten Kutner was previously married to Swiss financial wiz, Neal Kutner. Neal has been with Northill Capital in London, U.K., since 2015.

After her divorce from Neal Kutner, Kirsten had a whirlwind romance with the Shark, Greg Norman. The golf legend was fresh off the heels of his own divorce from his second wife, Chris Evert.

Norman reportedly met the interior designer more than a decade his junior on a business trip in Egypt in 2009. He confirmed he was dating her the following year. She was reportedly helping him renovate the mansion he had put up on the market as per his divorce settlement.

Norman was first married to Laura Andrassy, a former flight attendant, from 1981 to 2006. The golfer paid his ex a $103.0 million divorce settlement. His marriage with former World No. 1 tennis star Chris Evert lasted only 15 months.

After his second divorce, Norman tied the knot with Kirsten Kutner on November 6, 2010. The wedding was on Necker Island of the British Virgin Islands.

When news of Kutner and Norman’s relationship surfaced, along with the news of their quick engagement and wedding, their exes made their displeasure and bitterness known. Neal reportedly felt betrayed to learn his ex-wife is dating Greg Norman.

Laura Andrassy didn’t have nice words for Chris Evert, but in 2010, both of Norman’s ex-wives claimed that Norman had betrayed them. Both women had reportedly known Kirsten and Greg were acquainted and having an affair since the ‘90s.

Kaya is currently a student at Oxbridge (Oxford and Cambridge). Her Instagram indicates that her father remarried and had another daughter who is Kaya and Kelly’s baby sister.

Kirsten’s niece from her sister tragically passed away in 2010. She was Kaya’s best friend and the young girl, alongwith with Kirsten, often mourn her loss.

Greg Norman has two adult children—Greg Jr. and Morgan Leigh—from his marriage to Andrassy. Greg Jr. was his father’s best man at his wedding to Kutner.