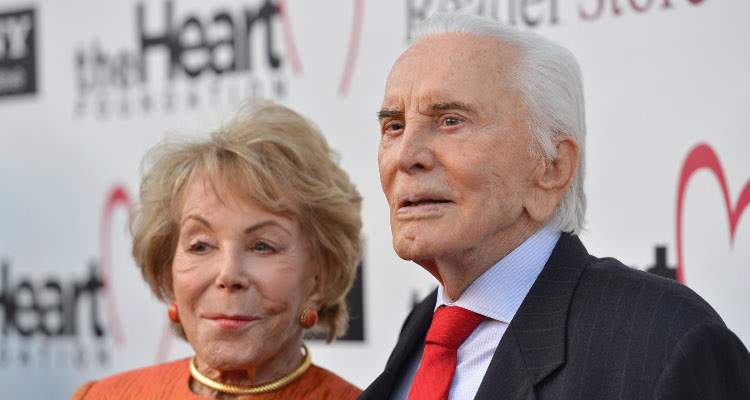 Anne Buydens is rightly proud of her marriage to actor Kirk Douglas, which lasted over 63 years and is still going strong. However, she initially refused to meet Douglas before the actor won her over. Although she went through the trauma of his regular infidelities, she worked to save her marriage. Today she and Douglas are happy and still in love. They are celebrated as one of the grand old couples of Hollywood. Keep reading to know more about Kirk Douglas’ wife in Anne Buydens wiki below.

There are different reasons some marriages last longer than others. Guess what the secret is behind Anne Buydens’ long, successful, 63-marriage to veteran actor Kirk Douglas? It is her “turning a blind eye” to Douglas’ regular infidelities with actresses like Rita Hayworth, Faye Dunaway, Patricia Neal, and Christina Crawford, among others.

Buydens revealed this startling information in her recently released book, Kirk and Anne: Letter of Love, Laughter and a Lifetime in Hollywood. In it, she wrote, “Kirk never tried to hide his dalliances from me. As a European, I understood it was unrealistic to expect total fidelity in a marriage.”

Born on April 23, 1919, in Hanover, Germany, Anne Buydens’ age is 98 and her mind is still as sharp as a razor. She is a Belgian-American actress, philanthropist, and producer who was a member of the International Best Dressed List since 1970.

Buydens was still in her early teens when her family emigrated to Belgium, where she became a legal citizen. She studied in Belgium and Switzerland before going to Paris where she got a job subtitling films, thanks to her fluency in several different languages.

Anne Buydens met Kirk Douglas when she was doing PR work while living in Paris.

Initially, she was reluctant to meet him, telling the Los Angeles Times, “I had done the public relations in Paris on Moulin Rouge. I worked with John Houston for about a year. I had another movie to do after Moulin Rouge. The director [Anatole Litvak] wanted me to be the PR lady on the movie, Act of Love, with Kirk Douglas.”

Kirk and Anne, his wife of 62 years with the family

At the time, Douglas was engaged to a young actress named Pier Angeli, who appeared opposite him in the 1953 movie, The Story of Three Loves. Buydens was introduced to Douglas by a photographer friend who told her, “Come on, let me take you to the lion’s den.”

Marriage after Much Bedlam

Buydens turned down Douglas’ offer of work and dinner, but it only made him more determined to get her.

In 2014, Douglas told the Los Angeles Times, “The fact that I didn’t impress her certainly impressed me, and I was determined to win her over. Anyone who knows my story knows the rest. She did join the production, and we courted in France and Italy. After I returned to the States, I invited her to come for a visit.”

Buydens and Douglas got married on May 29, 1954, after he broke his engagement with Angeli and Buydens threatened to leave him. Douglas remembers feeling that he would be “lost without her” when he saw her packing her bags.

There is no information on Anne Buydens’ net worth, but she has no reason to worry about financial matters because her husband has a cool net worth of over $60.0 million.

Buydens has two sons with Douglas: Peter and Eric Douglas. Unfortunately, Eric Douglas, an actor, died in 2004 because of an accidental overdose of alcohol and prescription drugs.

In 2004, Buydens married Douglas again. Their renewed their vows, and she converted to Judaism.

Kirk is blowing out the candles on his 101st birthday cake during lunch. Also celebrating are my niece Kelsey, my brother Joel and my step mother Anne.

Those who want to check out Anne Buydens’ photos when she was young should check out Pinterest, which also has pics of her and Douglas.

In 2015, Buydens told Closer magazine, “After 60 years of marriage, you go through a lot of obstacles, and all of them were beautiful.”

That’s a beautiful way to sum up a marriage that lasted for over 63 years and is still going strong.