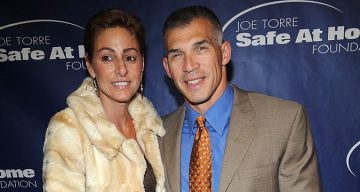 After the news broke about Joe Girardi being fired from the New York Yankees, fans of the team have been curious to know more about Joe Girardi’s wife. Our latest story covered Joe Girardi’s net worth, career, and more, but many want to know about the woman behind the man. For more details, keep reading our Kimberly Innocenzi wiki.

She Went to Northwestern University

Both Innocenzi and Girardi attended Northwestern University, which is where they first met. She was part of the Tri Delta sorority and was studying to get her master’s degree in education. They felt a connection at the Alpha Tau Omega fraternity house, where they started talking and bonded after Innocenzi lost one of her earrings.

The couple graduated and three years later, Girardi proposed, and they got married in Evanston, Illinois in 1990. Innocenzi became a third-grade teacher and when Girardi’s career launched, they moved to Purchase, New York to a gray-stone, six-bedroom house.

In 1997, before they started their family, Innocenzi had a miscarriage within weeks of her pregnancy. In an interview with the New York Times, Joe recalled what happened at the time.

“That was one of the toughest things we’ve ever had to go through. We thought that God had timed it perfectly. The baby was going to be born in November, so we’d have the whole off season to be with the baby. I kept calling her that night and she wasn’t answering. I knew something was wrong.”

Innocenzi had a rough time with the devastating news and her husband continued to support her as much as he could.

“She started to blame herself,” he added. “She took it a lot harder than I did. We went through a tough period until like a year later. It was much tougher for her because it was part of her. I just told her it wasn’t her fault. It was God’s will.”

Two years later, she was pregnant again, and she gave birth to their first child, son Dante (who was named after Dante Birchette, Joe’s former teammate with the Colorado Rockies). They then had a daughter, Lena. Bichette’s adult son is named Dante Jr. and the former teammates are still good friends even today.

She Has a Strong Faith

Although she’s been married to a public figure for decades, you won’t find any of Kimberly Innocenzi’s pics on social media! She’s a private person, which is likely why no one knows Kimberly Innocenzi’s age. She has a strong belief in God and introduced her husband to Jesus back when they were in university. She also helped him grieve when his mother died from cervical cancer in 1984.

“She made me realize that I was playing because God gave me a gift, and I would be able to share God’s good news through my gift and talent,” he told the New Yorker.

“We were sitting in the basement of the Tri Delta sorority house. Kim explained salvation to me, and I silently prayed to receive Jesus as my Savior,” Girardi added.

Well, it looks like the two have supported each other through all the good and bad, and now, with Joe Girardi being let go from the Yankees, we have no doubt his adoring wife will continue to be the pillar of support in his life.