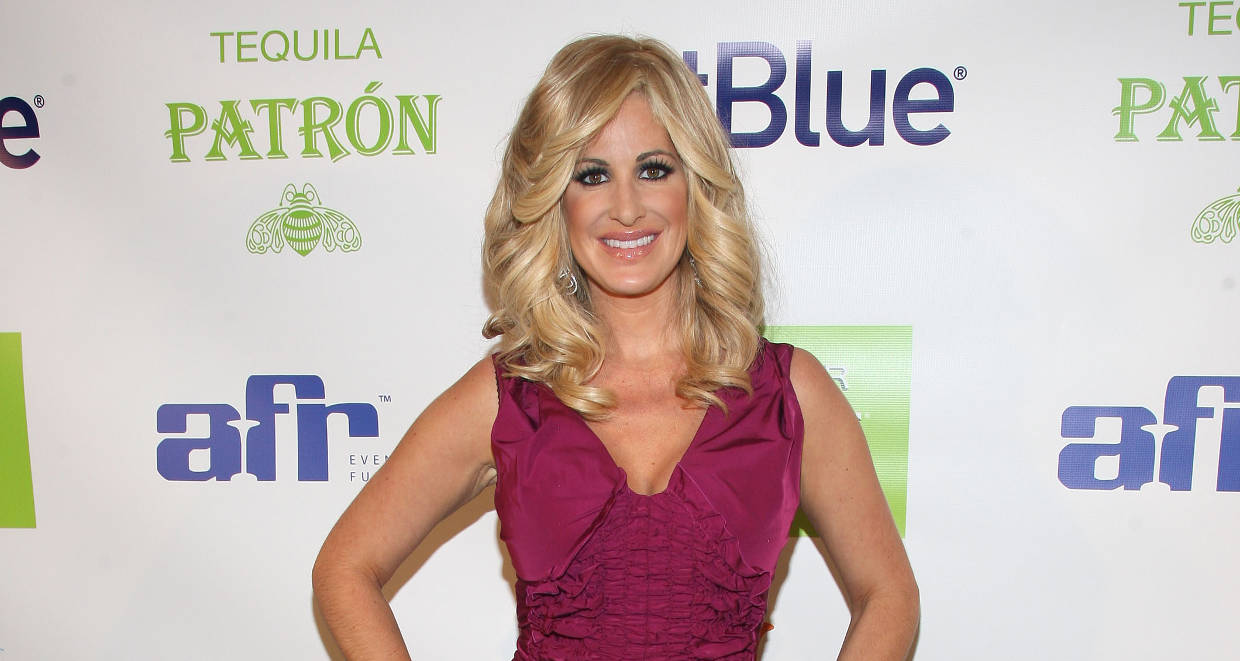 Kim Zolciak may be out of The Real Housewives of Atlanta, but she hasn’t lost her knack for drama. The RHOA troublemaker has profited out of drama by starring in two Bravo reality shows. Kim Zolciak’s estimated net worth in 2018 is estimated at $1.5 million, and she’s extremely deft in maintaining it.

Kim Zolciak was born on May 19, 1978, in Florida, and she grew up in a military family. She studied nursing at the University of Connecticut and later moved to Atlanta, Georgia, with her parents.

Fame came calling in Atlanta when Kim, then a single mother of two daughters, was cast in Bravo’s The Real Housewives of Atlanta in 2008.

During the course of the show, she met and fell in love with NFL pro Kroy Biermann.

The couple got married after their son, Kroy Jagger, was born. Their wedding was chronicled on the RHOA spinoff show, Don’t Be Tardy for the Wedding.

Kim left RHOA season 5 midway to focus on her own show, Don’t Be Tardy. She does appear on RHOA as a guest.

But after she was accused of making racist comments in the season 10 reunion, Kim almost didn’t return for Don’t Be Tardy season 7.

With intense fights involving the other housewives and the ability to drum up drama, Kim has stayed relevant enough not only to earn a sizable paycheck but also to build her business empire.

Kroy Biermann complements his reality TV income with his NFL earnings. Meanwhile, Kim Zolciak’s eldest daughter, Brielle, was able to negotiate her own salary when she was old enough.

Besides RHOA and Don’t Be Tardy, Kim also competed in Dancing with the Stars season 21.

Happy Birthday my love @kroybiermann ❤️ the BIG 33! You have accomplished so much in 33 years and I look forward to another million together. You truly amaze me DAILY Kroy! I have are no words to describe how much I love you! I feel it deep in my soul and to the core of my being. Thank you .. THANK YOU for loving me and our kiddos like you do!! HAPPPPY HAPPPPY BIRTHDAY ? You are in for the night of your life!!

When she first joined RHOA, Kim was working on launching a country music career. She changed her mind and switched genres to pop and released the party anthem, “Tardy for the Party.” It was followed with an EP in 2009.

Kim and RHOA castmate Kandi Burruss have a long history of friends-turned-foe. They once collaborated to produce Kim’s album, and she was a co-writer and producer for her song, “Tardy for the Party.”

Their relationship soured when Kandi sued Kim for copyright infringement and unpaid compensation.

Kim ultimately won the lawsuit and made amends with Kandi. But these two ladies won’t be doing business together any time soon.

The reality star launched a skincare line called Kashmere Kollections in 2016. The line has since expanded to include hair products and fragrances.

Kim went on to design the “Believe” line of eyelash extensions for Lilly Lashes, the go-to lash source for the Kardashian-Jenners and stars like Jennifer Lopez and Nicki Minaj.

?NEW PRODUCT? My Kashmere Cleansing Facial Gel balances and replenishes skin in one easy step, producing a slight lather while thoroughly cleansing the skin, removing all traces of makeup and rinses without a hint of residue. Formulated with light moisturizers and purified water, it leaves skin feeling smooth and soft. Perfect for those with oily or sensitive skin, including those struggling with rosacea! This will become your NEW fav @kashmerekollections product!!! I can't live without this! I LOVE to take my makeup off and sleep with a clean face … this product makes that happen! Link in my bio! #kashmerekollections #newproduct

Soon after her Kashmere brand got off the ground, Kim unveiled a kid’s footwear collection. She released KZB Kidz in collaboration with footwear designer Aminah Abdul-Jillil in 2016.

After getting over her fear of public speaking, Kim was set to embark on a 20-city motivational speaking tour in 2015. But the tickets were priced at a whopping $125.00, which earned a lot of negative response.

The tour was canceled before it began.

Kim and her husband are known for some over-the-top expenses.

There were rumors of money woes since Kroy Biermann has spent the better part of the 2017 season as a free agent and no team has picked him up yet. But their spending prowess still looks pretty solid.

Kim and Kroy were living in a townhouse with the kids while their dream home was being built. The Biermanns unveiled their gorgeous 17,000-square-foot Atlanta mansion in season 3 of Don’t Be Tardy.

The mansion in the exclusive neighborhood of Alpharetta was reportedly valued at $3.7 million. However, the developers went bankrupt, and Kim jumped to buy the foreclosed property for a steal at $880,000.

Contrary to her claim that she was “building” her dream mansion, she was actually renovating an already-built house. They did not demolish the house to the ground and rebuild it.

The Biermanns were almost evicted from the condo they were living in before moving into their house.

Kim’s not-so-humble abode boasts a Hollywood glam-style family room with an eight-foot-long chandelier, a basketball court, a pool, and hot tub. There’s also an elevator which functions more like a storeroom for camping supplies.

Kim and Kroy once dished that they spent $35,000 on a couch! The price of the couch was somewhere between $3,000 and $12,000. They spent additional money to charter a plane to have it flown in just in time for Christmas.

Among their expensive house decor are extravagant chandeliers, regal king and queen chairs, and Versace china. 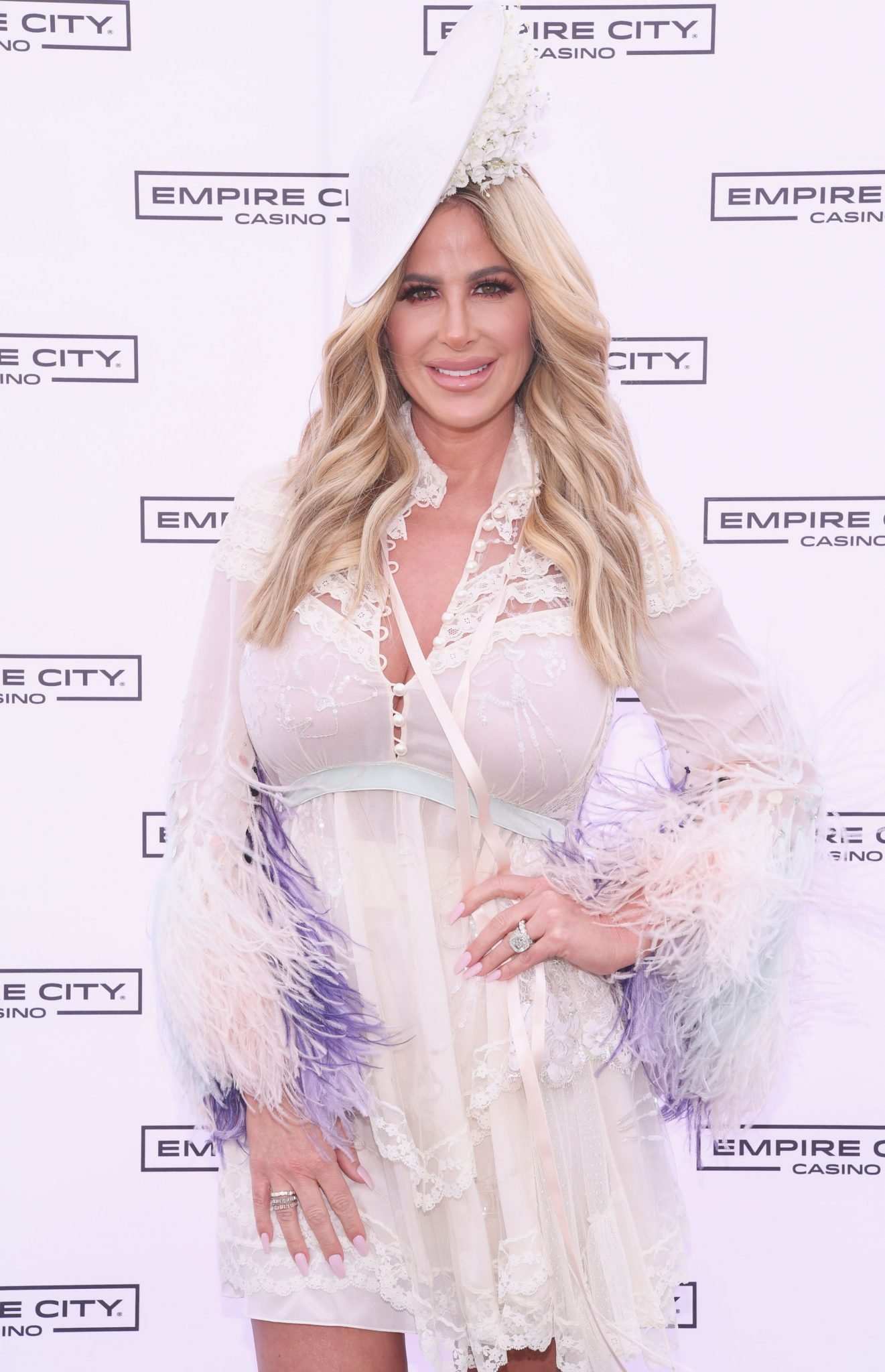 The Biermann clan is never not fabulous, and Kim makes sure of that.

From equipping Brielle with a magnificent closet of designer duds to dressing her youngest kids in bestie Kim Kardashian’s Kids Supply collection, Kim Zolciak’s family fashion is on point.

Kim herself has been spotted in limited edition Saint Laurent boots worth $10,000. She also sported $745.00 Jimmy Choo heels for a fab airport look in March.

Known for her affinity for wigs, Kim’s tresses reportedly cost $12,000 a month!

Kroy had proposed to her with a blinding 10-carat diamond ring worth $2.0 million in 2010. But she apparently got bored of it after three years and switched it for another 10-carat stunner.

Kim has no inhibitions admitting she has gone under the knife. She admitted she got lips and boob jobs, a tummy tuck, and regularly gets Botox.

She has promoted Ultherapy, a skin tightening treatment on Instagram. And she even let RHOA cameras film her while she sat under a fat-melting laser.

Kim Zolciak made headlines when she revealed her most recent art acquisition—a pink neon sign that reads, “PLASTIC.” If you find that familiar, that’s the same piece from contemporary artist Beau Dunn that Kylie Jenner bought last year.

The artwork cost her $7,500. That’s $2,500 less than what Kylie spent on hers. But Zolciak’s sign is smaller than the Kar-Jenner’s, which explains the reduced price.

The proud mama also gifted Brielle some racy art pieces. She gave her two sparkly torsos made of resin embellished with butterflies worth $5,550 each when she moved into her own home.

She also gave Brielle a Glock 43 handgun for her 21st birthday. This gesture raised a few eyebrows since it was soon after the Florida shooting.

After her comments at the RHOA reunion caused a backlash, it was rumored that an upset Kim wouldn’t film another season of Don’t Be Tardy. However, latest reports indicate that Kim and the brood have begun production for a new season.

How Kim Zolciak Compares to Other Housewives of the Bravo Franchise