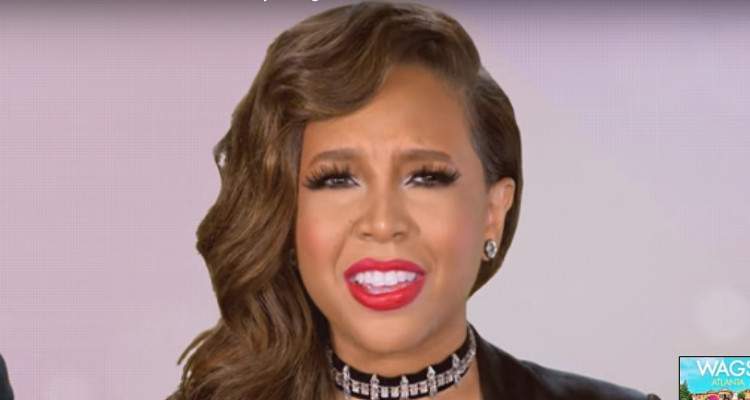 Kierra Douglas met her future husband, football player Harry Douglas, when he played for the Atlanta Falcons, and she was on their cheerleading squad. Their friendship later turned to love, and they got married soon after. They have a daughter named Harrison Milan, who is the apple of their eye. You can catch the three in the new E! spinoff, WAGS Atlanta, which premieres tonight (January 3) at 10:00 p.m.

Anybody who meets Kierra Douglas and her husband, Harry Douglas can quickly see how in love they still are. However, that wasn’t always the case. In fact, when they first met, they didn’t even like each other! The couple met when Harry was playing for the Atlanta Falcons and Kierra was a cheerleader for the team. At the time, she didn’t think much about Harry. She confessed, “He was not my type. It was just like’ ‘Oh, he’s just there. No, I’m not gonna waste my time.’” Kierra Douglas’ husband also admits that, in the beginning, they were not really attracted to each other. But as they spent more time together, they were drawn together. Kierra agreed, and added that after dating for around five years, they were really happy together. People are curious to know more about Kierra and her amazing chemistry with Harry, so we have some details from Kierra Douglas’ wiki.

Harry says that it was Kierra’s personality that won him over. He also attributes the wonderful compliments he gave her as the reason she agreed to go out with him. The two now have a one-year-old daughter named Harrison Milan, who Kierra says is a lot like her father. “She acts just like [Harry]. She’s wild and crazy just like him,” she explained. The adorable family of three will be featured in E!’s new show, WAGS Atlanta.

WAGS Atlanta follows the professional and personal lives of several athletes’ wives and girlfriends. Kierra is one of the nine women who are featured on the show. When asked if she was looking for love when she met Harry, she replied that she was definitely not, but what started off as a friendship grew into love.

Be Sure to Tune In!

I've always been a private person, handling my business quietly in my little bubble of happiness. Content with my 600 followers that consisted of only friends and family, never concerned with the antics of social media flexin. But in the light of new opportunities, new ventures, and because I'm tired of hearing "why is your page private" or "why haven't you accepted my request" ?. I have faced my public page anxiety and stepped out of my protective bubble. So hi new friends ?? I hope you like sappy videos, pic collages, and baby pics as much as I do ??‍♀️ ?. Excited to share my journey with anyone who wants to come along for the ride ?

Kierra Douglas’ Instagram showcases her in stunning clothes, pictures with Harry, her daughter, friends, and the football field when Harry plays. There are also some inspirational quotes and pictures of her idols like Barack and Michelle Obama. You can learn more about the lovely Kierra Douglas and her cute family when WAGS Atlanta premieres tonight, on January 3, 2018 at 10:00 p.m. on E!.